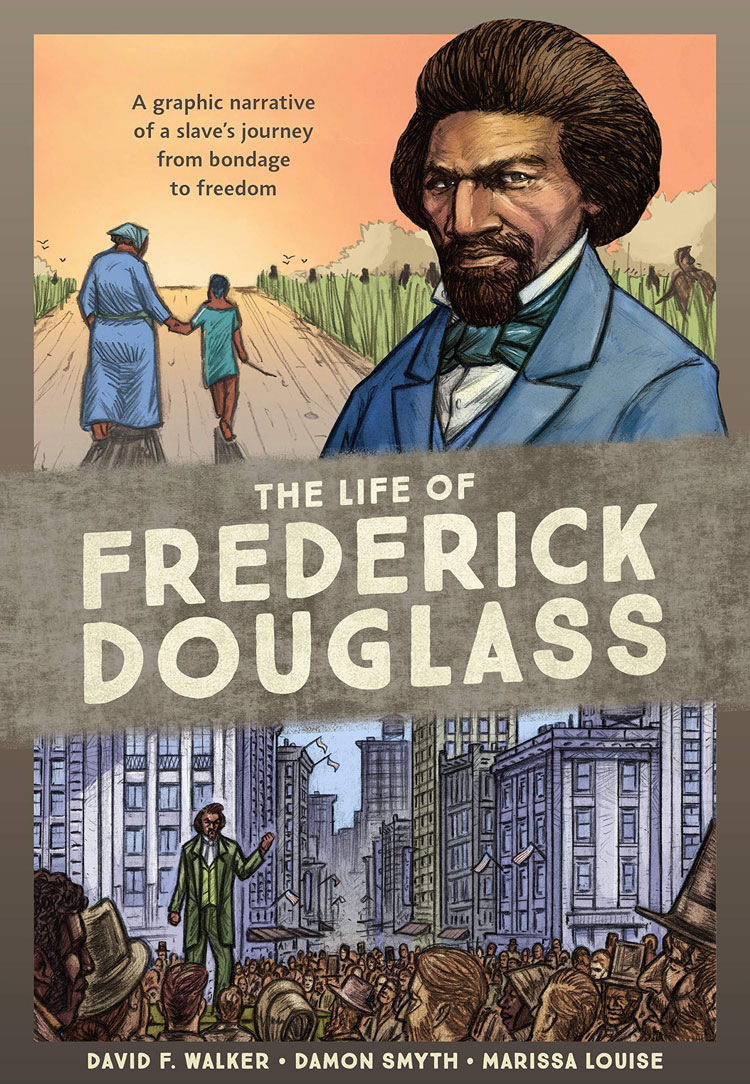 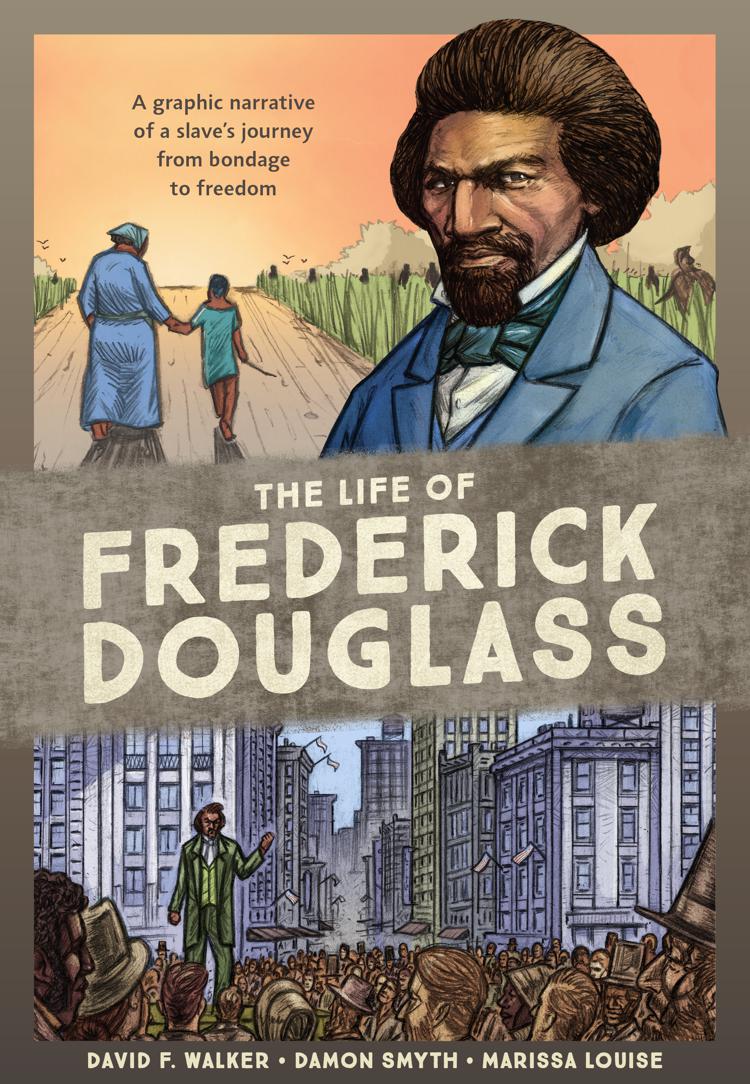 He died as he was born: A human being.

I have a multitude of words and a multitude of thoughts after reading The Life of Frederick Douglass. Just as this creative team had to condense the life of an astounding and complex man into 182 pages, so is it also a challenge to craft my words in a concise manner. This graphic novel is a paradoxically wonderful and jarring exploration of an era of slavery through one of the most recognizable, and apparently most photographed, people in American history. Within this story exist multiple narratives that give nuance to the deplorable dehumanization of slavery, but also events that we are experiencing now.

The story immediately starts with the recognition that, since slaves were only seen as property, they were treated as slaveholders saw fit, including sexual assault of slaves and a denial of their history. Frederick Douglass died never truly knowing when he was born, or who his father was, and this is just the beginning of the story. From this point, we see the tribulation of being sold, multiple times, to different families or their members. We see the threat of violence or death for daring to learn how to read. We see a relationship between Black folks and the white folks around them, from the slaveholder to the racist to the abolitionist. Douglass was a man who sought freedom for all, but began to recognize that its cost would not always come with peace.

David Walker immediately sets an important context for the entire story, highlighting not just Douglass’ humanity, but that of slaves. The history lessons peppered through dialogue, narration, and breakdowns of the past help to give an important reality regarding slavery, oppression, and the ways that white supremacy has existed and oppressed both slaves and their descendants. In the introduction to the comic, Walker openly addresses how he is using Douglass’ words and perspectives, an important consideration of what he points out as an understanding and true recognition of others’ humanity, especially Douglass’.

The best example of Walker’s writing and how he approached the story is that very few things are straightforward besides the continued and justifiable understanding of slaves as humans. Abolitionists are not painted as perfect, exemplified in William Lloyd Garrison and John Brown’s reaction to Douglass when he begins to disagree with him, both of their ideals in some ways steeped in privilege and potentially not fully understanding Douglass’ own experience as a slave.

We also get to see a glimpse of women’s politics around the time with the inclusion of the Suffrage Movement and brief appearances by Sojourner Truth, Frances Ellen Watkins, Susan B Anthony, and Elizabeth Cady Stanton. With the former, we experience the difficult experience of Black women at this point in history, torn between the recognition that only the men in their community can vote. With the latter two, we see the Suffrage Movement at odds with America, given how Black men, again, were able to vote before them, implicitly touching on not just a sense of justice in hierarchical fashion, but potential racial rifts between many Suffragettes and Black people in America. Douglass himself even says something that mirrors what we often hear now, especially for those who exist at the intersection of marginalized identities: ‘This is a setback, but it is not permanent. First, we secure the right to vote for Negro men, and then we continue to fight for women.’

Damon Smyth’s rough style feels as though it matches the tenuous experiences we see through Douglass and the high level of tension that existed around his life (and that certainly still exists now). Malice, pain, discomfort all come through Smyth’s work, intensifying every character’s emotions. This effect is important because it’s easy to detach from this kind of narrative, due to the vast temporal separation between us and these events. So, what Smyth does is make us confront this point in history in its violence and oppression. It’s not just when Douglass is a slave that we see white aggression; we see it when he arrives in New York. We see it in the war and the saddening treatment of Black soldiers before, during, and after. Smyth’s penchant for anguish is a vital element of this story, even if heartbreaking.

Yet, there’s something else Smyth does that touches on how happiness can exist in sadness. Though constantly threatened and subjugated by slavery and whiteness, many of the Black characters in the story experience joy. Smyth captures these moments with clarity, revealing that even in the midst of a storm, we can see breaks in the sky. These events do not ignore the oppression that exists as the foundation for the story and its retelling of history; they show that marginalized people may still experience joy through family or friends or their passions.

Marissa Louise gives characters an air of distinction throughout the story. In scenes where we see flat colors or subtle but astounding gradients, every person stands out, as Louise also grounds everyone in their own hues. We see a different effect in scenes involving buildings and cities. Here, characters seem to blend into their environment, offering a sense of normalcy despite what may be happening in the story. Louise’s use of color makes us focus on everyone in the story. We keenly see their expressions and their actions.

Louise also employs silhouettes and shadows for contrast and emphasis. Scenes like Douglass recounting his early days of work or Brown explaining his Kansas plan to him are full of specters; one, the specter of potential violence while the other is the specter of racism in employment. Behind the characters of focus exist these looming shadows telling another part of the story, cast in one sheen, yet still that powerful.

The Life of Frederick Douglass is truly a deep dive not just into a Black historical figure, but the sociocultural context that existed around him. It’s not enough to understand that slavery happened, and it’s not enough to call it bad. This creative team pulls no punches in highlighting the atrocities of this era of American history, as well as who perpetuated them. Such a story dashes ahistorical notions of ‘state’s rights’ or that all abolitionists were truly dedicated to Black lives. It also illuminates the small bricks and mortar that add up to slavery and oppression, as well as Abraham Lincoln’s own folly in protecting Black people. It is a tough, dense read, but this graphic novel is worth anyone’s time. What I hope is that folks learn from it and see how it is what helped create our modern culture, as well as how it is a reflection of current events.