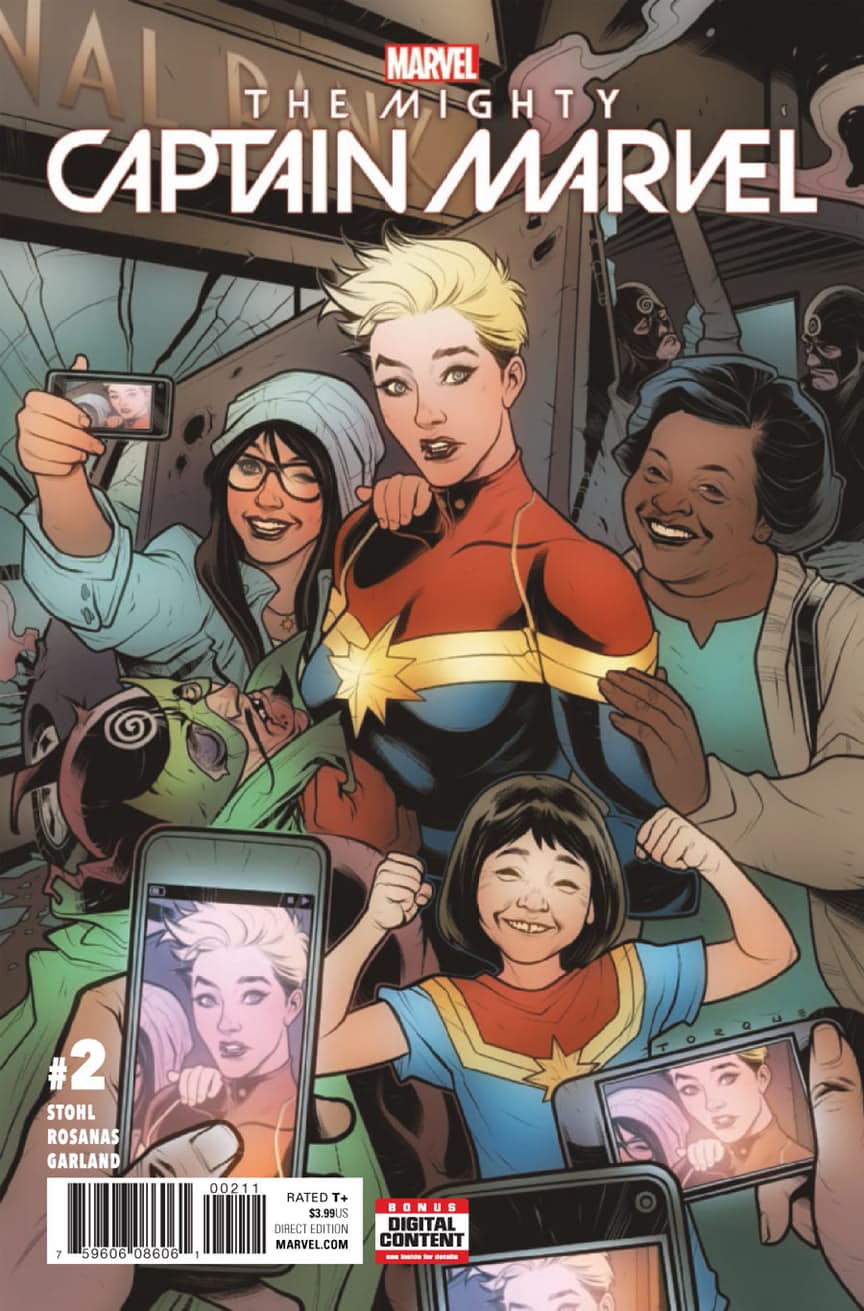 In between a massive alien refugee crisis and being forced to allow a show about her life to be created, Captain Marvel strives to find a balance while struggling with new problems with her superhuman abilities in this issue of the Mighty Captain Marvel!

Stohl has created a Carol Danvers I can get behind. She’s a strong woman dealing with the pressures of those she works with as well as the international pressures of countries she wishes she could talk to to provide an understanding of the situation at hand. She’s almost too powerful with her kree abilities, but with all her physical ability, she can do very little without political sway, leaving her powerless to her own fate. It feels both ironic and compelling. Stohl tells the story of a woman fighting an uphill battle and slowly losing, even if she herself can’t see it yet, and I’m excited to see how Danvers will pull through.

I love Rosanas’ space art in this issue. He draws space stations and escape pods well. He, along with the coloring abilities of Garland, creates a beautiful sea of stars in every large window of Alpha Flight Space Station. Panels like the splash where Bean floats with Chew while eating jellybeans in zero gravity are dazzling. Rosanas and Garland also have a way with action, especially explosion scenes. The clouds of smoke, the shadows of people, the sparks flying around the edges of panels—it all adds up to a fantastic display of art ability. They’re exciting panels to see.

VC’s Joe Caramagna goes above and beyond with his lettering in this issue. I love the Captain Marvel-specific text boxes having a color scheme similar to Captain Marvel herself. Every “BOOM!”, “RAWRR!”, and “THUMP!” has it’s own style to it, and I appreciate that. It’s great work.

I’d say this is a good read. It’s a story about a woman frustrated with the people around her and how she keeps a cool head, nonetheless. It has an ongoing mystery that I’m sure will bite Carol in the butt soon enough and I’m interested in seeing how that will go down. Reading this comic makes me want to go back and read previous Captain Marvel comics in order to have a better understanding of her crew and her history. If you like Captain Marvel, you’ll definitely like her new series.