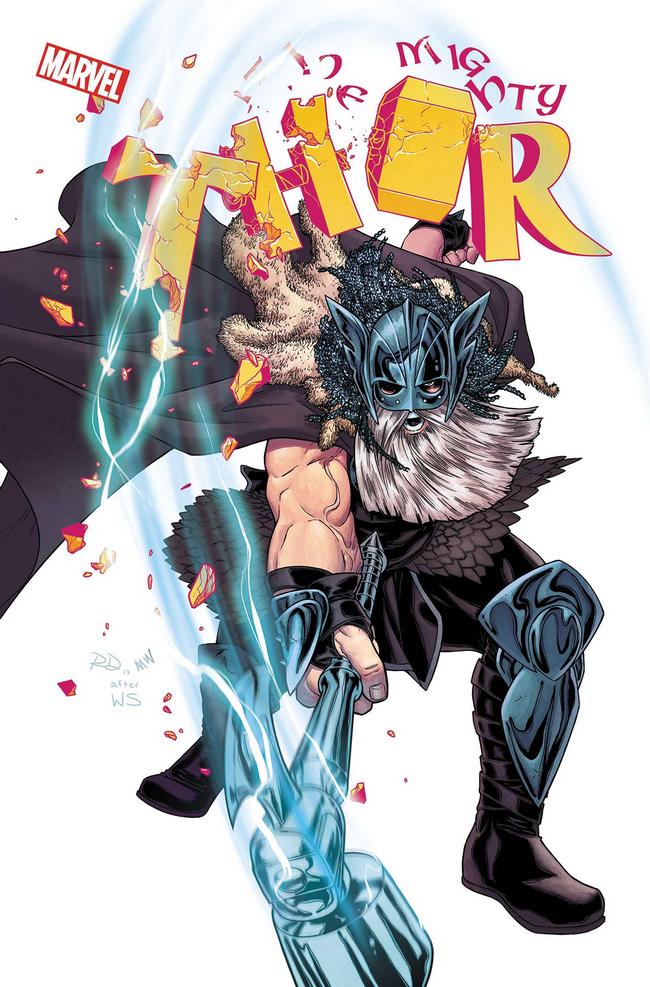 Considering the over-the-top (read: spectacular) insanity that was The Mighty Thor #19, Jason Aaron switches gears and presents a much different kind of story. While there is much praise to go around for all the good that Aaron’s incorporation of Jane Foster into the cosmic Thor mythos accomplished, some criticism about how long it took to really get to her reveal had some validity. With a run as good as what Aaron accomplished, certainly being critical of how long it took to reveal Jane as the Goddess of Thunder at least addressed a common concern with the nature of comics. Having a secret identity and keeping readers guessing can, at times, yield a big pay-off. Aaron, already writing for two Thor characters, was rightly questioned when, at the end of the Unworthy Thor mini-series, Odinson refused to lift the hammer of the Ultimate Thor. “Why? Why go through all the trouble of introducing the new hammer to leave it? Who picked it up at the end? A third Thor?! Are we going to have another round of ‘wait and see!’ teasers until things are made clear what is going on?” some asked, loudly, in comic stores and on the internet.

Don’t worry. The Mighty Thor #20 provides more than enough answers for all concerned questions and it also addressed some concerns present in Aaron’s narrative. This comic is a step in the best possible direction for where the story of the Ten Realms needs to go, and it is good (nay, great!) that the question of “who” the new Ultimate Thor is gets answered in a direct and satisfying manner.

The challenge for this review is: how to best explain the story without giving away the reveal of Ultimate Thor’s identity? I believe the best thing I can say is that, regardless of the question of Ultimate (or, War!) Thor’s identity, Aaron’s plot is going the distance in setting up the state of the Ten Realms and that is good on its own. Aaron has been playing a long game ever since Malekith was brought into the Marvel universe back in 2012 during the Thor: God of Thunder series. The Mighty Thor #20 sets up the effect Malekith has had on the realms beyond just the domain of the light elves. We get a glimpse as the home of the dwarves, as well as some comical jabs concerning the relationship mythical, norse-styled dwarves have with feasts. It is about the only laugh to be had in what is a very grim story. Aaron’s choice of showing the impact war has on the innocent goes far in establishing, very quickly, ‘why’ Ultimate Thor has a role in the Marvel Universe. Given the actions that spurn Ultimate Thor into action, it is clear that Aason has a very clear intent for what kind of actions Ultimate Thor will be undertaking in future issues.

I can this much, at least, without fear of spoilers: he won’t be feasting or handing out stern warnings.

I will say the reveal of Ultimate Thor’s identity is fantastic and it may even come as a breath of relief for some.

If there is anything to be critical about, it is the overdue conversation between Jane and Odisnon about her actions as Thor. After the events of The Unworthy Thor, Aaron has crafted an Odinson who clearly is accepting of the fact that he is not with his hammer, but he isn’t in the best place emotionally over it. His tone with Jane at some points could almost be described as petty, but he also does not have much to say after Jane states her case for how she feels about what the hammer gives her … and why she is afraid of it. Unfortunately, this section is cut short by an awkward transition into another part of the story, so things remain to be seen about how Odinson and Jane will resolve their relationship. Aaron’s voice for Jane is important and well-crafted, especially where her fears are concerned, so this issue is also fantastic for getting a look into her mind regarding how she feels when she is and is not Thor. Alas, I just wish there had been more.

Dauterman and the rest of the artistic “Team of Thunder” gets to strut about with depictions of some of really great elements, from violent explosions that rip through dwarven canyons, to some particularly nasty denizens of Muspelheim who ride of flies and use maggots for bombs. Much of the actions presented by both Dauterman and Schiti are in the form of wave-like explosions, the kinds of elements that really allow colorists such as Wilson and Gandini to play with color. While much of the domain of Nidavellir is colored in greys and blacks and browns, the horrors of war get presented in striking crimsons and yellows and golds. Dauterman and Schiti also both get tremendous mileage out of working with presenting expressions on characters as a means of narrative. Some moments are only depicted through looks of terror or grief, yet these also serve as some of the strongest.