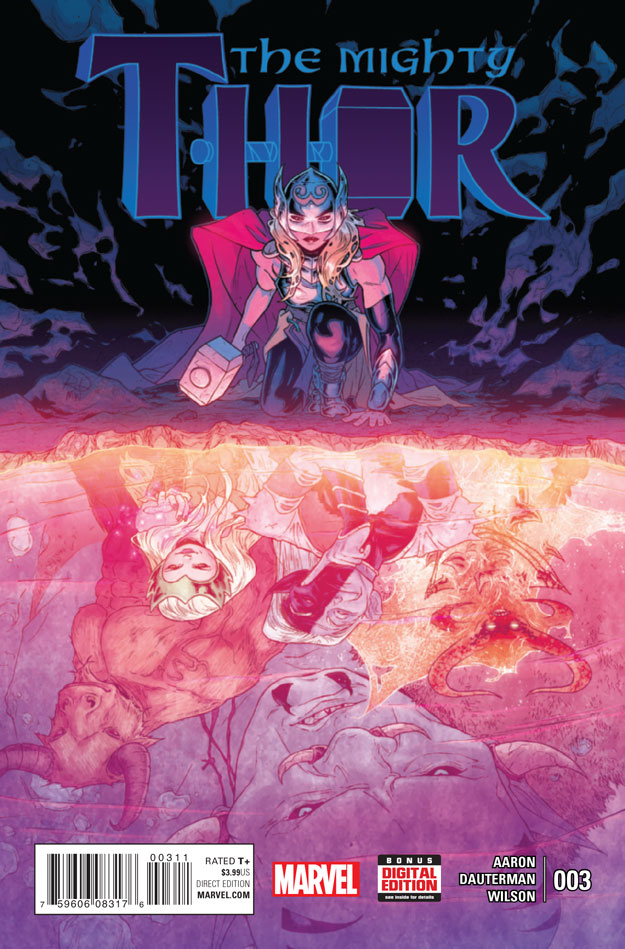 Do you feel it? The rumbling thunder, coursing outward from the pages of this comic? It’s okay to shake, it’s hard not to when you’re holding onto something this epic.

Thor and Loki square off in this issue of The Mighty Thor, bringing Jane into her first interactions with Loki since she has held the hammer. She’s no stranger to Loki, and Aaron makes some nice nods to her past with the Trickster as she brawls with iterations of the menacing bastard. Aaron’s banter between the two characters is fabulous and he does a great job capturing the sympathetic side of the Trickster. Dauterman sells the visuals of Hiddleston-Loki, but Aaron’s words fit the mold perfectly and Jane’s take on Loki’s long speeches is fabulous. This comic is full of action, laughs and one heck of a finale and what Aaron did best in this comic is he kept me pondering the age old comics question: just what the hell is Loki up to now? Thor and Loki is always great but in recent years, under the guidance of Kieron Gillen and Al Ewing, Loki took on a whole new aspect of his personality that makes this Thor confrontation more interesting than ever before and Aaron certainly takes the ball and runs with it. This story is showing no signs of slowing down and I’m loving ever page Aaron writes.

While Loki steals a few moments in this issue, Thor is the main attraction and I applaud Russell Dauterman and Matt Wilson for making her explode from the page. Loki tries to dazzle with his words and the art team renders him amazingly well, but Thor steals the show in all the mayhem, power sizzling from Mjolnir when she fires up. This issue may be the finest Dauterman has penciled yet as some of the action is quite crazy but easy to determine what is occurring despite the Loki madness and lightning flying. His pencil work is perfect, his portrayal of Loki fabulous and Thor obviously as bad-ass as ever. Matt Wilson’s colour work takes those amazing pencils and cranks the dial to 11, giving the huge amounts of energy and flair in this issue some serious snap. This comic is dazzling to read and Wilson’s work is essential to the visuals I have come to expect from Thor. Dauterman and Wilson have defined this character and the Realms for me and this is probably the best looking comic to hit store shelves this week.

The Mighty Thor #3 is a krakathooming good time, and it is a damn good time to be a Thor fan. This issue is a classic Thor vs. Loki romp with the twist of everything new about these characters and the cliffhanger this team delivers to close out the issue is very powerful. The Mighty Thor is in the running for the best superhero book in comics and this issue solidifies that. This creative team is on fire and you can’t go wrong if you choose to pick up The Mighty Thor #3.