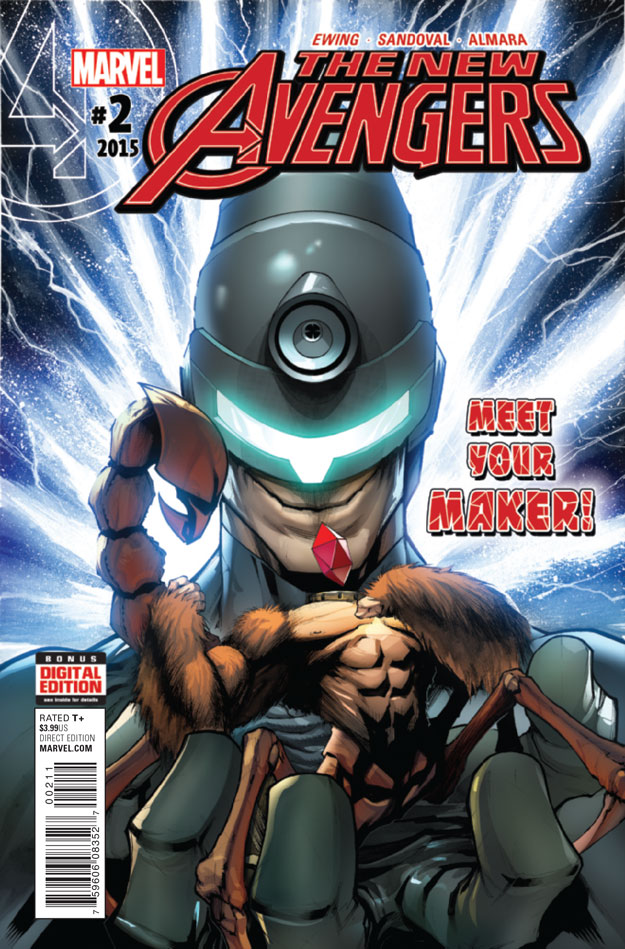 Our newest crew of Avengers is still in Paris trying to uncover their crystalline mystery. In the throes of battle, Squirrel Girl and White Tiger find themselves in a compromising position, driving Sunspot to put his new A.I.M. to good use. While it seems a major part of the problem is solved, the Maker is moving behind the scenes, hinting at things more sinister and dire around the corner.

This issue is what I want out of a team series. There are some stellar moments throughout. Squirrel Girl and White Tiger show off their combat skills, and Power Man and Songbird use their powers together to do some truly amazing stuff. There’s a sense of cohesion among the team, and that’s an important part of making these kinds of books work. It’s believable that these people would work together well, something which speaks volumes about the New Avengers.

Al Ewing knows how to craft his characters. The Maker is sadistic, but carries some of the sophistication that seems innate to Reed Richards of any world. For me, with little background on the Maker in the context of the Ultimate universe, this is like a character study of what happens when really smart dudes dive into some really dark stuff. Sunspot is wonderful as the leader of A.I.M. willing to assert himself and take charge when he needs to. I like that Ewing has a firm grasp of who these characters are in this specific context and is able to execute dialogue and characterization that is consistent and authentic.

The more I read this series, the more I fall in love with Gerardo Sandoval and Dono Sánchez Almara’s art. It’s funky and stylistic, just the way I like it. Their art is well suited to showing the dynamic movements in fight scenes, and the colors fully flesh out each and every panel. The characters and their environment are imbued with energy and activity. My only issue is that I’m starting to notice that Squirrel Girl’s body is less distinct within these pages, which takes away some of the important parts of her character and her addition to diverse bodies in comics.

From Ava and Doreen to Melissa and Mandy, the women in this issue stand out. While much of the dialogue and story is framed around men, the Maker and Sunspot, these women take the forefront in their scenes. I want to see how Al Ewing portrays these women as the series moves forward. They have a lot of potential and history behind them that would be easy to capitalize on. Essentially, The New Avengers has a treasure trove of wonderful characters who aren’t all White hetero dudes, and I hope we see them shine.

The only thing I wanted more of in this issue was Wiccan. But, let’s be honest, I’m probably going to say that every issue. Basically, what would make me happy is if the series was called Wiccan and the New Avengers or, The New Avengers, Starring Wiccan and No One Else. But if that’s my biggest issue, then The New Avengers is definitely doing something right.

This issue was essentially made for me, from the stylistic art and colors to some great character dynamics. Some of my favorite characters are in one book and I feel that they’re going to have some awesome growth and adventures through the course of the series. This is definitely one of my top picks for an All-New, All-Different Marvel.