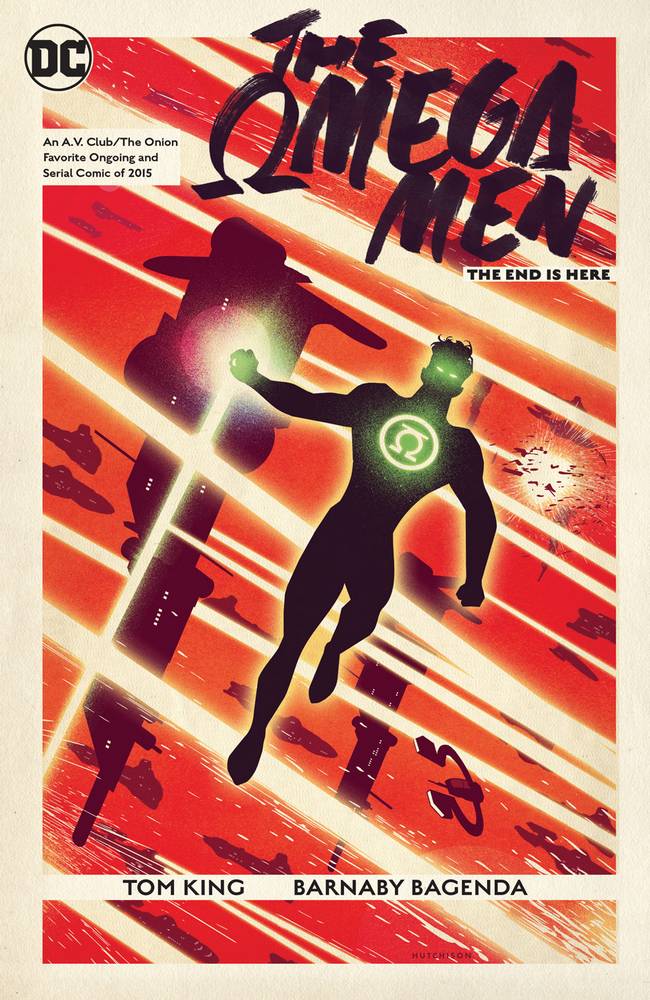 The Omega Men…. I’ve spent nearly two weeks trying to determine how to review this collection and do it justice. Being that this is not a typical comic, the conclusion I came to is that a typical review will not suffice. The Omega Men is a story that needs to be experienced, and now you can with the entire series being collected in a single tome. Said tome is available in comic book stores and book stores/online retailers, so you officially have no excuse to not buy/order this collection and rejoice in the glory of what the insane team of Tom King, Barnaby Bagenda and Romula Fajardo, Jr. built for you to feast your eyes upon.

I’m not going to talk about what occurs within this collection. I’m not going to talk about any specific events in the story. This is a safe, spoiler free zone because The Omega Men is something that should be experienced unspoiled. Instead of talking about these events I’m simply going to say that you should try this collection. It is a special read, a special comic and one of the most unique series I have read in the past decade. This is one of those comics that will grow into a cult series and be spoken of in reverent tones years from now, and you’re doing yourself a disservice with each moment that passes that you aren’t reading it.

While it won’t be everyone’s favourite subject matter and tone, it is a dark tale of death and war, the way these storytellers craft their tale is gripping, unnerving and completely captivating. Purchasing The Omega Men will be one of the best comics related decisions you make this year.

And now, I’d like to proceed with some thank-yous:

Thank you, Tom King, for breaking me a bit month after month. Thank you for taking this story and walking into the darkness – the imperfect darkness and lingering there, showing the complexities of life in this grand arc of insane characters and intergalactic war. Thank you for making me think, making me read words over and over again and contemplate their importance in the grand structure of this epic, and making me take time with a comic. Thank you for not shying away from darkness without simply glorifying vulgarity. Thank you for characters I have never heard of and may never see in comics again, but who were complex enough to make their mark. Thank you for writing one hell of a story.

Thank you, Barnaby Bagenda, for flawlessly executing visuals that are powerful on every single page. Thank you for capturing the angst and despair of story like this. Thank you for giving me a monthly dose of a world unlike any other in comics. Thank you for visuals that engaged both my eyes and emotions by showcasing complex characters and their extremely complex emotions. Thank you for shocking me and keeping me on my toes. Thank you for letting silent moments speak the volumes they needed to. Thank you for hitting the beats right on the mark, and giving The Omega Men their just due visually.

Thank you, Romulo Fajardo, Jr., for layering this comic in a palette that captures the tone of the story magically. Thank you for setting an emotional tone with your colour work that renders dialogue and exposition unnecessary at points, and can tell a tale beyond what words can describe. Thank you for helping to render images that are simultaneously beautiful, engaging and jarring. Thank you for some of the best colour work comic readers will read in 2016.

Thank you to the editorial team of Brian Cunningham, Andy Khouri and Amedeo Turturro. Thank you for assembling the team of storytellers that executed their vision so well, and thank you for working to give the story the time it needed to conclude properly. Thank you for giving this book its chance and giving it the room it needed to breathe and become what it is.

The Omega Men is not your typical comic. It is not a ripoff or some kind of derivative sci-fi adventure filled with tropes. This is a true space opera and there is nothing I can compare it to that would do it justice. Find the collection, devour the collection.