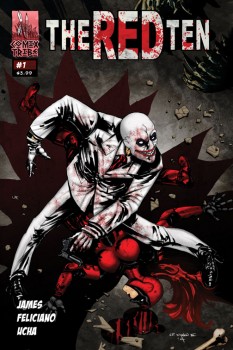 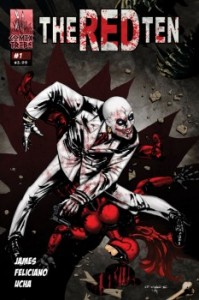 Before we settle on the observation that The Red Ten is derivative — and it is, a self-acknowledged mashup throwing the Justice League (more or less) into Agatha Christie’s novel And Then There Were None — let’s grant that being derivative isn’t always a bad thing. Derivative doesn’t have to mean uninspired. Adaptation, translation, and continuity itself all produce works that are on some level directly derived from a previous existing work. Rorschach is a slightly tweaked take on the original version of The Question. Felicia Hardy has a few things in common with Selina Kyle. Alan Moore’s League of Extraordinary Gentlemen is a case study in both how good (the comic) and how bad (the movie) derivation can be.

So where exactly does The Red Ten fall on the derivative spectrum? Well, let’s say that the idea might be better than the execution. Putting the world’s ten most powerful heroes on an elaborate island death trap is an idea worthy of the Silver Age. Actually killing them is a grim modern spin.1

But then there’s the actual product. The art and staging are really just not up to par. What is meant to be a relaxed, intimate moment between two of the characters in their own home comes off as a quick lift from a bad movie. Between the extreme muscle tone and the slapdash coloring, the characters look like they’re made of plastic. The anatomy is mostly correct — is it possible to have an eight pack instead of a six pack? — but nothing appears to move. It’s actually a relief when the characters put their clothes back on, although they don’t actually get dressed, they’re just in their underwear in one panel, and then tie and trench coats in the next.2 And when we meet the larger group of heroes, their names are either parodies that don’t quite come off, or they’re just bad. (“Justice America”?)

There’s certainly a lot of fun that could still be had. The appeal of And Then There Were None isn’t that everyone dies, it’s the how and the why. There are nine issues left in The Red Ten to tease out the specific ways in which these heroes aren’t really very nice people.3 But an interesting death trap is a feat of imagination, and while I like the idea, the particulars are precisely what I’m worried about.

For example, Agatha Christie readers will remember that her novel isn’t exactly about a death trap, at least not in the mechanical, Rube Goldbergian, Silver Age comic book sense. In Christie, there’s a murderer among the ten. I’m pretty sure the same is true in The Red Ten, and that the first issue has sent some pretty clear signals about who it is. I’d be more excited about the series as a whole if I were more sure that those signals were intentional.

1. And let me be the first to say that as skillfully done as the first issue of Avengers Arena was, I couldn’t bring myself to keep reading a story about a group of children on the cusp of adulthood dying and being forced to kill. It’s a little bit different when it’s (the equivalent of) Batman and Superman finally meeting their match.

2. I’m also not going to make a big deal over the fact that they seem to be drinking champagne — they’re using flutes and there’s a bucket of ice on the dresser — except that they’re pretty clearly shown to be drinking some sort of a red, which, if you’re being classy, would be served in a glass with a wider bowl, and is almost never chilled. That could just be an error by the colorist. Except then wouldn’t there be bubbles in the glass? Ah well.

3. Besides short tempers and foul language, there’s at least one instance of water-boarding in issue #1, lending some welcome credence to the mystery killer’s assertion by proxy that it is the heroes’ own guilt that demands their deaths.