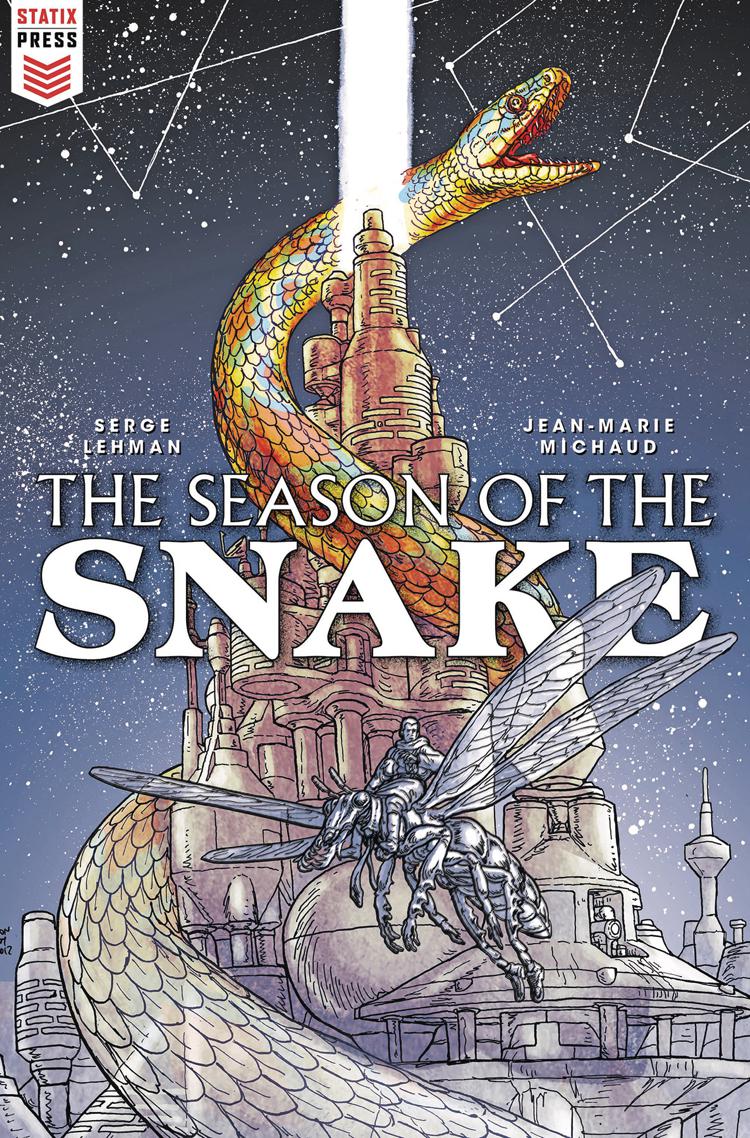 Modern sci-fi seems to be shifting away from the junkyard sprawls that littered the cultural landscape of the past two decades, probably because our formerly sleek modernity is giving way to whole new levels of chaos. We look outside and even though we know the planet is hurtling towards a terminal cancer stage what we’re terrified of most is all the orderly systems we’ve come to depend on turning out to be data predators, wolves in social media clothing.

The Season of the Snake is a comic that does and does not fit this trend to a t— it is set in a far future space that is pristine yet archaic, where most people are part of a mass group or a communal consciousness and individuality is both dangerous and necessary for survival. It is a confused comic for a confused time and while its first volume often struggles to efficiently communicate its actual aims, its ambition and ideas are too intriguing to ignore.

Like Tim Truman’s Hawkworld before it, The Season of the Snake grounds the reader in the perspective of a new cop with a famous father, a social outsider who must learn the ins and outs of the book’s world along with us. The cop in question is Derec Finn, a servo at Intersection 55, essentially a way station between worlds where travelers must wait at least 100,100 seconds before hopping in a miniature wormhole to arrive at their intended destination so their atoms can properly rebuild. I55 is an airport and a city and limbo all in one, drawn by Jean-Marie Michaud as a cold grey and white Moebius place, all spiky cyberpunk gadgetry and panic inducing cliffs and floating islands.

As a servo, Finn’s job is to escort VIPs while they’re waiting for their seconds to be up, ensuring their safety even though we’re led to believe I55 is mostly pretty dull and without incident the majority of the time. But there wouldn’t be a story if something didn’t happen to disrupt that. Serge Lehman’s scripting delivers that in the form of a floating serpent that unleashes pamphlets reading “True life is the thing that s-s-seeps” on the crowd below, right as Finn is reporting for his first day. It seems innocuous at first, but as Finn and his fellow servo Rhea and their commanding officer Chief Hauer soon realize, it’s an omen of the bizarre, possibly world shattering events to come.

The unfortunate thing about Season of the Snake is that Lehman crams in so much exposition and dialogue the bizarre aspects of the story are almost completely submerged. Michaud is able to juggle a truly incredible amount of detail and characters, ranging from a trench coat and fedora wearing ant-man representative of an insect consciousness to a pregnant space hero to a sentient ooze in a mech, but Lehman rarely gives the reader space to take all of that detail in. The dialogue in particular is as oppressive as a Chris Claremont script, albeit with far less melodramatic tangents.

This would perhaps be more forgivable if it felt like the first volume delivered any real answers but throughout Season of the Snake’s first collection, Lehman sets up new concepts and ideas too quickly to coherently explain them. As soon as you get a handle on one alien species or authority, Lehman has moved on to the next and the jagged pacing only heightens the narrative anxiousness.

Granted, the characters within Season of the Snake seem equally perplexed by what’s happening, for the most part. But it says a lot that I initially wondered whether what seemed to be a visual change functioning as a narrative cue was on purpose or some kind of printing mistake. However, Michaud’s vivid, immersive art and the way the story comments on how faith in technology can lead us susceptible to large threats that we could have avoided if only we’d pay attention more than makes up for those deficits.

The chaos that reigns throughout The Season of the Snake’s story and craft is, in fact, a key component of its effectiveness. Reading this collection isn’t too dissimilar from spending a day entrenched in the internet, distracted by weird imagery and concepts and voices, and the wonder over how its system even works at all never really goes away. Even with its floating buildings and noir trappings, The Season of the Snake never feels like Blade Runner or, worse, one of its contemporary impersonators, like Altered Carbon. It instead feels like an actually disruptive and unique work that may struggle to hold its narrative together but at least never struggles to hold your attention.