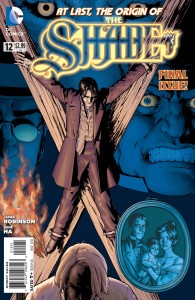 The latest magnum opus from the writer of Starman comes to a close as we finally learn the true origin of the Shade. Rising out of 1838 London, family man Richard Swift encounters the so-called “Bad Dwarf” Simon Culp, receives the oddest request of his career, and in the end, his life (or death) will never be the same.

You know how whenever a diehard fan really wants DC or Marvel to put out a book, be it by a particular creator or about a particular character, he or she may say, “I’ll buy X copies of this book every month if you publish it! I swear I will!” This is usually a claim made in support of a character that may not be super popular, that seems like a long shot to succeed in the market. I have always wondered if anyone ever really put their money where their mouth was, and what would really drive someone to live up to that promise.

For the last year, I have not had to wonder. I have gladly purchased three copies of every issue of The Shade just to get to this moment — to finally read the story of his dark and terrible origin that was alluded to since James Robinson first wrote the character in 1994 in the critically acclaimed series Starman. And it was definitely worth it. Sort of.

I say “sort of” not because the contents of #12 are anything less than exemplary. Robinson’s craft is at its pinnacle with this book — channeling a voice for the titled character so crisp and clear, you’d believe he was the dark man himself. Very rarely am I able to hear such a distinct and unwavering voice in my head for a character as I can for the Shade, and in this, the final issue of the series, we finally get to hear two versions, the before and the after. The depiction of Richard Swift as a man utterly devoted to his family and friends is nearly jarring in comparison to the cool exterior of his modern years, and yet only for a split second. It’s almost as if suddenly we knew that aspect of his character was there all along, just torn off the side of his soul and preserved between the pages of a book — this book — waiting to be rediscovered.

Ha was well chosen as the finale artist, rendering the moment of the Shade’s creation as no other artist could. The growing horror and transition from order to chaos with one page flip is so adeptly handled, you can literally feel Dick Swift’s former life disappearing into the ether. The amount of detail on every page guarantees multiple reads. This series has been blessed with brilliant artists issue after issue, and Ha’s contribution more than lives up to those who came before.

So, why “sort of,” after all that? Because, in true fashion for one as complex and darkly opaque in character as the Shade, Robinson only gives us half the tale. A complete story (and one, I might add, worthy of reading even if you have not picked up any previous issue) this book certainly is, but hardly the end. There is still a great enigma to the Shade’s beginnings to be unraveled, and I am desperately glad for it. I suspect I would be deeply sad were this the last untold story. Knowing there’s another one out there is both comforting and maddening, but ever wanting more is perhaps the best place to leave off with a beloved character. For as Dick Swift’s good friend once wrote, “The pain of parting is nothing to the joy of meeting again.” May it be soon indeed.