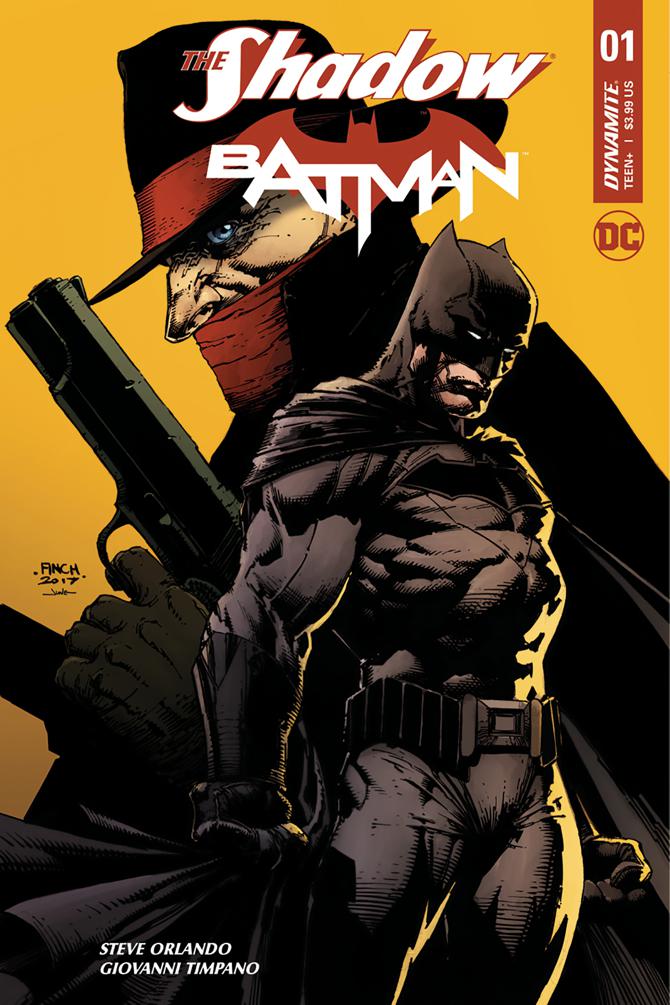 Is it Christmas already or did I somehow convince some random comic people to do a second crossover of the Shadow and Batman? Second crossovers that I didn’t realize were happening and only pleasantly realized after they came out as review pick aside, let’s see what’s in store in this first exciting issue of The Shadow/Batman!

Orlando is a fantastic writer and I am always happy whenever I read his work. I am super dismayed that he wasn’t able to snag the Joker for this latter crossover (at least so far), but I am in love with the fact that he brought in my number one Robin and child hero who talks like a super villain, Damian! Damian is my favorite character in this entire issue, even with Alfred’s spectacular snark, and he is just always a treasure to see. Lines like “Your mastery of the obvious is well-honed” just make me smile.

I also like that we get to see a softer side of Batman through him. Batman has a tumultuous relationship with his son, at best, and it’s nice to see scenes where it shows that Batman actually does care for Damian in a father capacity. I read a lot of comics from Damian’s perspective, and Batman generally treats Damian as a lower tier employee he’s awkwardly mentoring at best in those, so it’s really nice to see him, well, wishing Damian has a better life than he had.

While it’s sad to say goodbye to Riley Rossmo’s work from the first crossover, I feel that Timpano’s work is a good choice for entering a story based more in the real world with a dash of noir style. Timpano’s work in his splashes is well done. I like his usage of paneling within the two-page splashes, they create a more dynamic page while still showing off his intricate backdrops.

I feel that Dispenza’s coloring compliments Timpano’s art style. It provides bright lights that harshly juxtapose the shadowing within the comic. Dispenza also seems to have a great eye for mixing and balancing warm and cold lighting in the scenes, creating the melancholic feelings of a noir while bringing an ominous factor with the reds.

Overall, I like what they’ve got so far! Do I still miss the Joker? Yes. Does bringing Damian make me feel better? Oh, a million times yes, you’re basically saying “You can’t have the Joker, but what about we throw in one of your favorite characters instead?”. I think this first issue of the second crossover is worth a read.