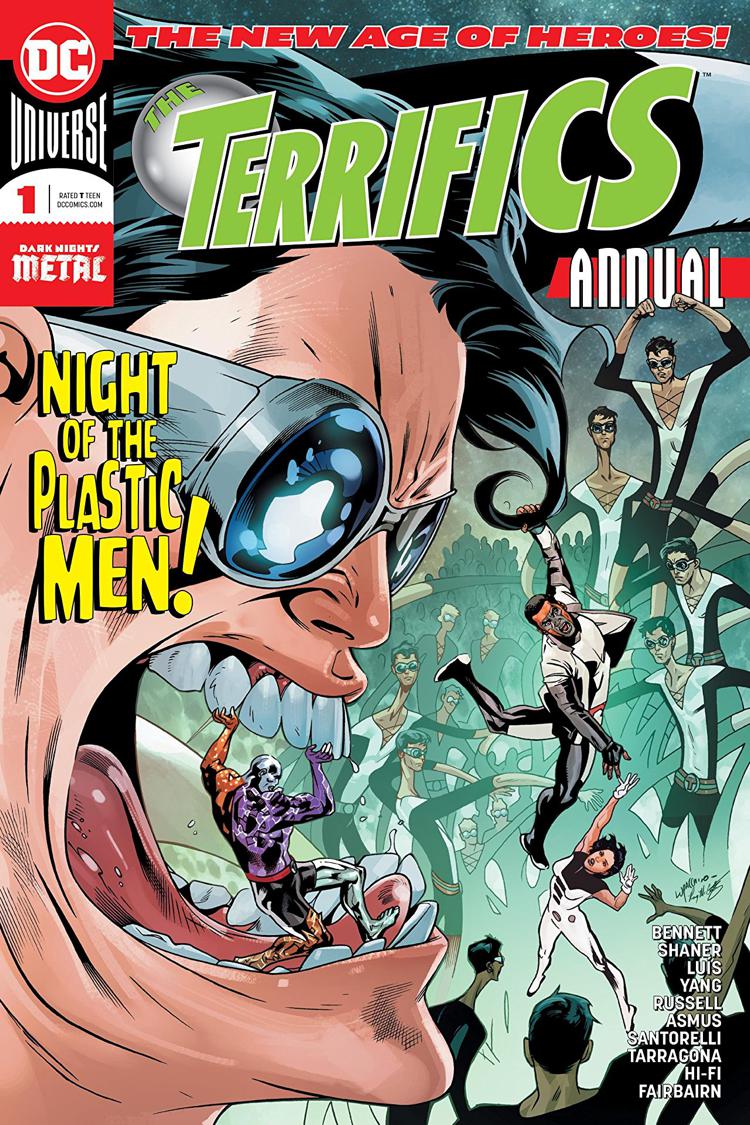 The first story, Masquerade, is written by Gene Luen Yang and is an Invasion of the Body Snatchers-esque story with Plastic Man, Simon Stagg, and a scientist named Dr. Zhang at its center. The story plays off the issues Halloween release to deliver a truly creepy story that features a Stagg industries Halloween party that gets crashed by Stagg’s latest escaped evil experiments that have managed to take over the identities of some of the parties attendants. The story walks us back down Plastic Man’s memory lane, when at one point in the story the creatures who are crafted from his DNA take the form of his friends, family, and even former enemies giving us a nice look into the memories of Plastic Man. I won’t go into too much detail about the creatures or how they came to be, but I will say that Yang does a great job keeping that old school monster movie feel. The art for this particular story is spectacularly vibrant and full of motion and delivers an almost trippy/spooky vibe that perfectly compliments the issue’s Invasion of the Body Snatchers vibe.

The second story, The Origin of the Specious, is written by Mark Russell and features the art of one of my favorite artists, Evan “Doc” Shaner. The story is centered around Java and his life before Simon Stagg and his associates found him preserved in ice and reanimated him. In the story we get a real sense of Java’s life as a Neanderthal and his role within the community that he was apart of. We see a Java that is important and well loved within his clan, a Java that is a hunter and protector as well as a lover and friend. We get to really see his experiences and the hardships he faced as well as the friendships he cultivated and even the woman that he loved. The major conflict in the story is between the Neanderthals and the arrival of Homo Sapiens and the struggles that created in the food chain which in turn resulted in Java’s fateful meeting with the ice. This story actually really made me interested in potentially seeing a Java miniseries or some sort of extended issue where we get to spend more time with Java and learn more about him. Doc Shaner’s beautiful art enhances Java’s storytelling prowess. The art is soft and nostalgic and it feels like Im ready a classic story.

The third and final story, The Message, is written by James Asmus and it revisits something that was introduced in the first and second issue of the series. The story revisits the “dead” creature that our heroes found themselves on when they entered the Dark Multiverse portal. The story seeks to explain not just how Tom Strong got to the creature but also what the creature is, how the creature become imobilized, and the role that the beacon Strong left within the creature found its way there. This might be my favorite of the three stories simply because it takes us back to the very begining of the series and seeks to give us a little context and information that we previously didnt have. Im a sucker for a good prequel and Asmus delivers 100% on fleshing out Strong’s journey as well as the spark that started our heroes entire journey together. Had it not been for this one moment our heroes probably wouldnt have found themselves bound together by Dark Multiverse Energy and we probably wouldnt have the Terrifics that we have right now. The art for this story is stellar and holds true to that cosmic adventurer feel that has made The Terrifics one of my absolute favorite DC Comics series.

Overall, The Terrifics Annual is a fantastic read with stellar art thats going to remind you of exactly why you fell in love with comics in the first place. The thing that I have loved most about The Terrifics series in general, and not just this issue, is the way that it calls on classic comic nostalgia to deliver us those stories that remind us all of the universal mystery and adventure that drew us to comics to begin with. DC struck gold when they brought this unlikely group of characters together to form a team which I can honestly see becoming a family.

The Terrifics Annual does a great job at not only furthering the series but also going back and adding to what we have already seen from previous issues. The writers do an awesome job at revisiting things we thought we’d already seen and experienced just to give us a little more context and information to full flesh out those past scenes.