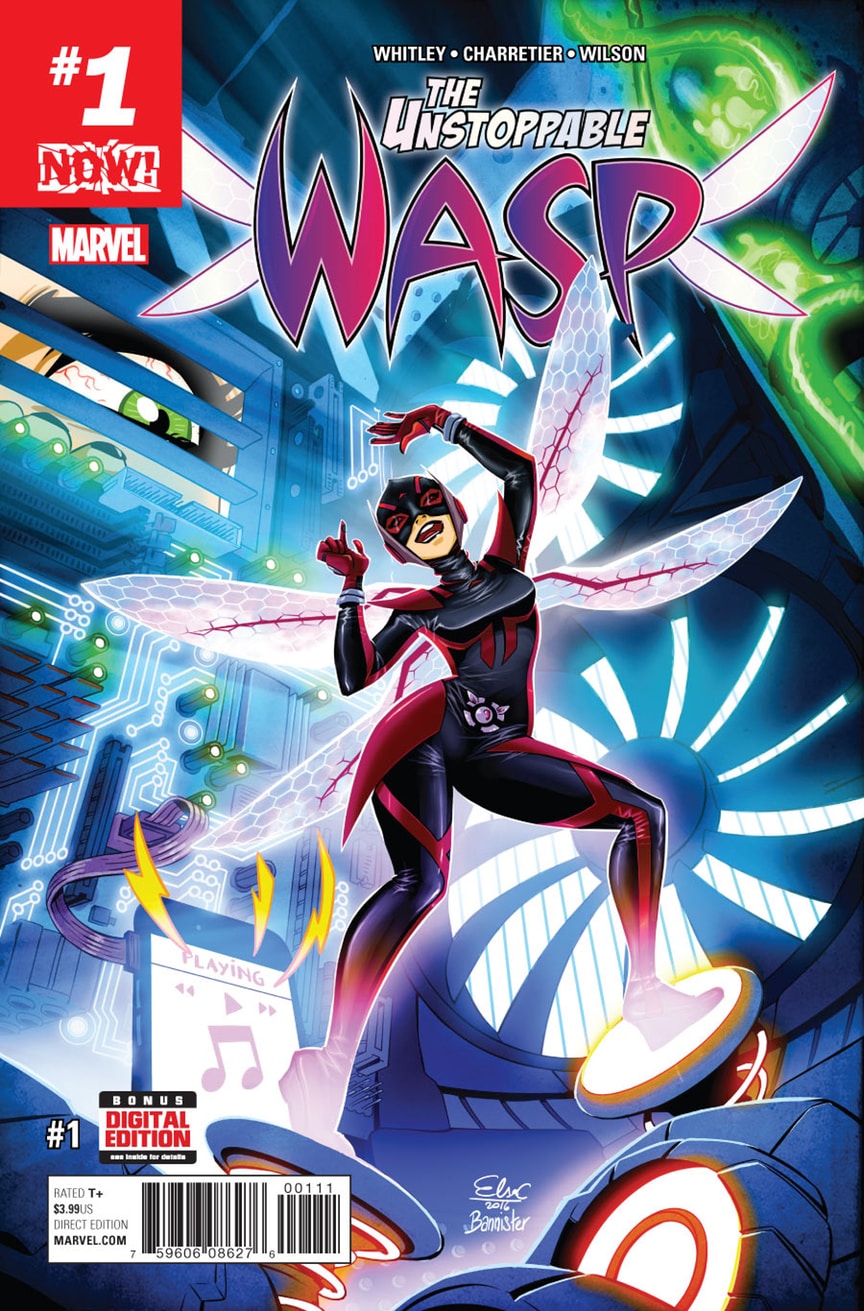 Out of the red room and into the real world, Nadia finds her mission in life in this first issue of The Unstoppable Wasp!

Whitley creates an instantly likeable character in Nadia. Nadia feels almost like the protagonist of Unbreakable Kimmy Shmidt—a young woman stuck in a bunker for most of her life, embracing the world happily instead of turning towards bitterness. Nadia’s positive attitude is much needed with a backstory like hers and her need to strive towards greatness gives her some awesome drive. Nadia also gives credit where credit’s due to people who I’ve honestly rarely seen complemented for their genius abilities in comics, which is refreshing. As you can tell, I just really love Nadia as a character.

Charretier’s art is amazing. There’s a feeling of motion in every panel which keeps the reader engaged. She creates some pretty interesting panels, like one where Nadia is controlling a giant robot. She’s making the giant robot dance as she reminisces about how much covert criminal organizations strangely love ballet. As she spins, the robot spins the same way, the panel chopped up into different sections like a body flip book. The reader can just tell Charretier is having fun with the materials she’s given to draw.

Megan Wilson’s coloring creates Wasp’s atmosphere. The colors are bright, but not too bright. They bring this feeling of hope that Nadia travels with, this happiness that feels almost contagious to those around her. The colors really complement the character. The usage of reds for Nadia’s past is a great choice as well. The Lettering by VC’s Joe Caramagna is pretty spectacular as well. I especially loved the “BOOM” panel, I found the way Caramagna built up the sound then emphasized it by making the shape of the panel a gigantic “BOOM” really creative.

My favorite scene is at the very end, but I don’t want to give too much away, so I won’t spoil it at the moment. I’ll give you a hint, though: it involves genius ladies.

What I recommend reading The Unstoppable Wasp. Nadia’s adorable, her quips with Ms. Marvel, Mockingbird, and Monica Rappaccini are extremely entertaining. What this issue starts, as the first arc, is something I’m very excited to see. Why are you even reading this? Go read The Unstoppable Wasp now!