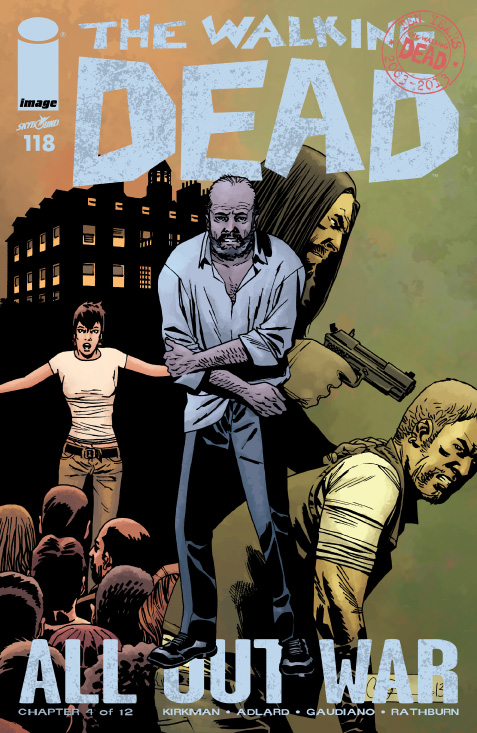 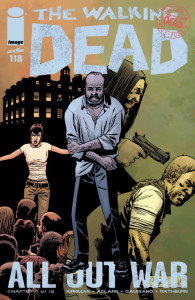 All Out War, the event saga that is gripping readers of The Walking Dead, continues to make its mark as issue 118 propels the story forward in a dynamic and shocking way. What we learn from this issue is that the world is not pretty, not even in the slightest, and it will continue to not be pretty because that is what we’ve come to expect from this series.

What’s unique with this issue in particular is the lamentations and perspectives that writer Robert Kirkman and artist Charlie Adlard are able to offer. We see different viewpoints from different camps. We see unexpected casualties lose their lives like lambs to the slaughter, from gunfire and/or zombie attacks. We see people’s souls being barred on these pages as loved ones are lost in moments. All of this is nothing new to the avid Walking Dead fan, but what is deliberately being offered in this issue is the conscious awareness of it, that all of these things take a toll on people. The Walking Dead often moves so fast sometimes that we hardly get some of the aspects that exist outside of Rick. Some of that awareness comes from the narrative perspective of Ezekiel –as we weave in and out of different vantage points we’re able to view an experience that The Walking Dead has not quite ever done before.

Kirkman exposes our team of survivors to more of their own mortality and reminds us that this motley crew of survivors are fallible. He reminds us that these zombie-killing rock stars have something at stake. Maggie displays some great tenacity and virileness about why they must pursue Negan and fight him and stop him. She gives an applause-worthy speech and tells the people on The Hilltop that not only does Negan take everything from them but also reminds us that Negan was the psycho that brutally killed her husband. While we are seemingly given hope Kirkman is quick to juxtapose a less hopeful scenario for the rest of our survivors that continue to battle the Saviors at Negan’s outposts. Death, destruction, and chaos all ensue.

Charlie Adlard gives a stunning job of providing detail and the comic radiates with confidence in his line work, his details and his definitive style. Splash pages give a great moment of breadth to the story and Adlard even repeats panels with gunfire erupting to let the reader stew in the violence and fear that is going on in the series.

Ultimately, this issue reminds us that once again no one (and I mean no one) is off the table when it comes to death in The Walking Dead. Your heart strings get pulled in a way that hasn’t been done in quite some time for readers of this series, but it definitely ups the stakes for what’s in store for the following issues.