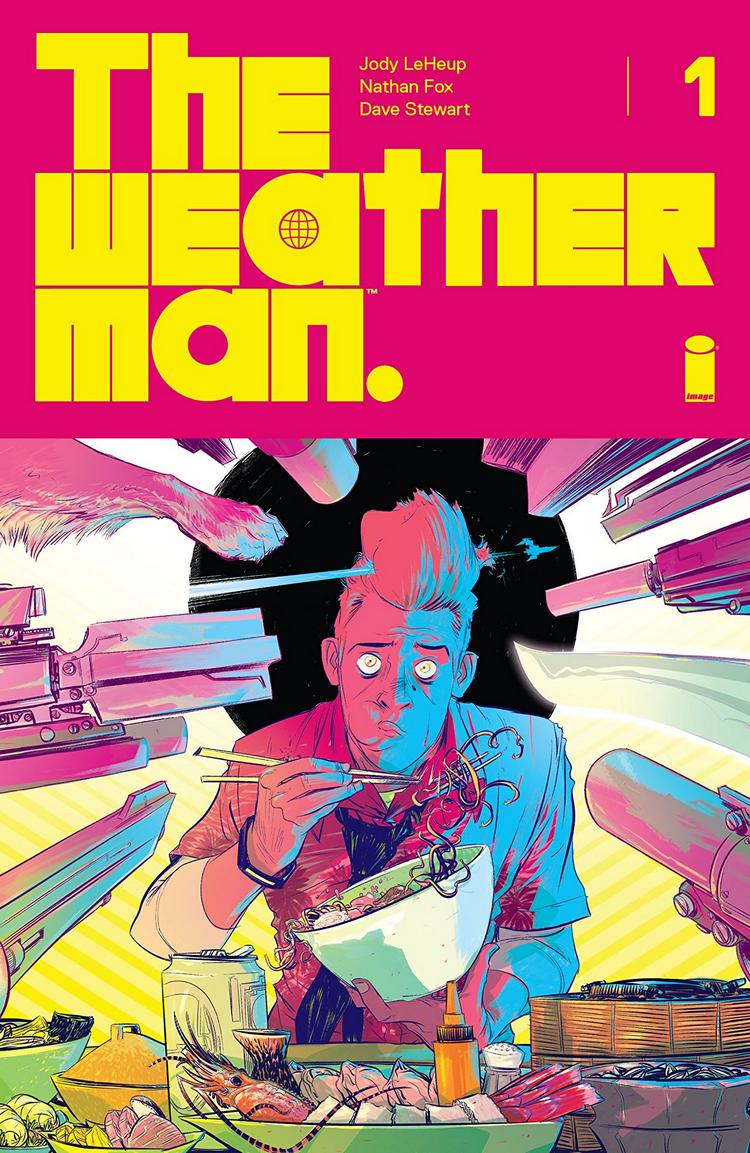 Mars. 2770. Life is somewhat like life on Earth with the typical everyday normalcy of the morning. Leheup presents a world that may be so far ahead of our own but remains set in average, run of the mill plot trappings and character archetypes that we’re familiar with.

Fox presents a bustling world for Mars. It’s an Earth-style setting with highways, bustling details along the way thanks to Fox’s art filling in backgrounds around the panels and characters. The futuristic touch of the world makes itself apparent through the lettering by Wands. Leheup establishes some solemn truths about Mars without saying outright what they are early on, making the tone of the book range from serious to comical and back again when it really gets underway with our main character Nathan Bright.

The Weatherman in question being Nathan Bright is a protagonist that falls in line with the lovable idiot’s that get by off of their likable charm and ability to sell or complete a task and Nathan is just that. Fox’s art is great for capturing the expressions of the diverse cast of characters and paired with Stewart’s that are more reserved and not as eye-popping and bright but compliment the scene as need be let the character work from Fox shine. The world of Mars and its citizens isn’t lost on Leheup and the dialogue gives us a look into a world that has a featured style of relaying news we’ve seen in other Image titles such as VS and Motor Crush. Fox’s art is lively and not only fills out the background with small details and rough around the edges pencil, the characters themselves fill out the panels with a detailed yet, cartoony style that fits the world of the book.

Nathan’s character shines bright with what Leheup sets up ad shows us with the character. He’s charming and endearing with a great attachment to his dog Sadie. Stewart’s colors keep the eye on characters when it comes to larger locations and the panels. Fox’s line work and details are fitting of the world and the script and the nature of the characters fit the energy and tone. The showcase of Nathan on the job does a lot of work for the character and the world building while letting readers understand how Nathan is viewed. The comedy of his character comes through without a problem. Leheup spreads the weird importance and necessity of our titular character across the airwaves and it’s a great way to showcase the heart behind the goofy and clown of the main character.

Things take a turn in typical fashion with outside forces inadvertently closing in around the space of Natham without him even realizing it. The colors take a drastic shift here, what was once sunny and flashy turns red and brutal as villains are introduced and they make an impression quickly as bullets start to fly. Fair warning to the opening issue though, there’s a tug on the heartstrings when an animal gets violently attacked when the bad guys begin to wage war on an unsuspecting Nathan. Fox, Stewart, and Wand all come together for a chaotic display of violence and frenzy. Wands letters are spread throughout the panels effectively a part of the page and what’s happening. Fox captures the movement and energy of the fight scenes with Stewart utilizing coloring differently when it comes to the lettering and the action.

The Weatherman ends on an interesting note that sets Nathan Bright as the main character with a past that’ll no doubt be explained as time passes. We’ve seen this type of setup before in countless programs where the lead is dragged into a world of crime and violence because of a huge problem that may or may not has caused. It’s going to be pretty hard to absolve Nathan of his specific crimes but the journey has a tone of comedy and action that Leheup has a handle on despite the quick tonal shift escalation and seriousness. With an interesting cast, a location that already has world building on its side, and art that only focus on what it needs to giving it an off-kilter and infectious side. The Weatherman is a fine debut that sets up its main focus with ease and gives us plenty of reasons to come back.