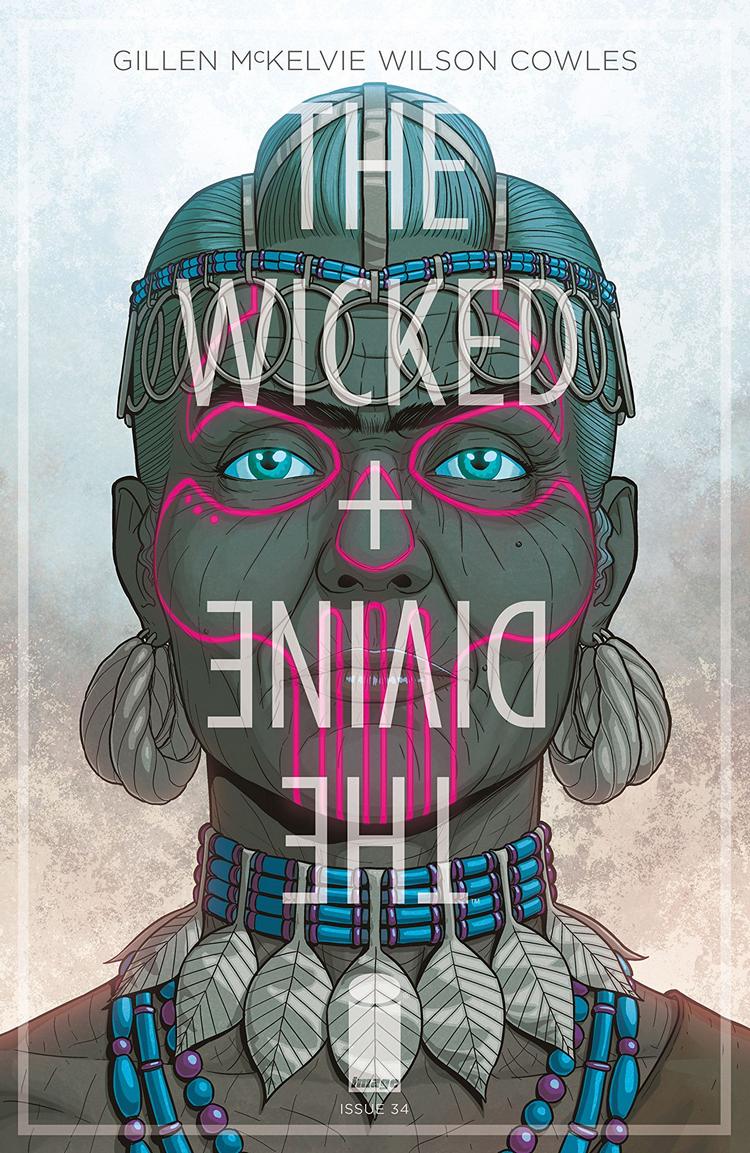 We pick up on the end tail of a journey between The Pantheon of the past and it’s here that thousands of years of God killing begins as Gillen presents a last stand that changes the game….through a conversation. The Wicked + The Divine begins it’s latest arc with taking a look at the past and aiming towards the future as questions begin to get answered with the Current Pantheon and character relationships begin to get tested as the cliffhanger of last issue gets expanded upon and the characters continue to wrestle with their own issues as things continue to get complicated along the way.

Prior to the present, we’re treated to McKelvie and Wilson making the conversation of two God’s a sunshine affair against the backdrop of the shining and barren desert, save for our characters in question. The two characters have a lengthy conversation that has McKelvie at his best with his use of facial expressions, detail, and style for the characters combined with Wilson’s colors that are eye-popping even when blood soaked. McKelvie matches Gillen’s writing at every turn and Gillen packs surprises at every turn as the sentences pass between the two and it explains the very nature of the current game of the God’s. We’re treated to the introduction of the rules and guidelines for the Pantheon’s now and forever with McKelvie keeping the focus on the two God’s faces and zoomed in to capture all of their expressions and facial cues as the mood and conversation changes as the panels progress. Gillen writes the opening conversation with some of the poetic irony that we’ve come to see pass in the present and to see the origin of all the chaos and the causes of it, seeing it for the first time is something to behold. McKelvie and Wilson channel the ferocity and savagery of the last kill as the colors balance out with a highly saturated green with the more realistic and muddled God soaked in even more blood. Panels retract for us to absorb the act that will be passed down for every cycle to come and with that…we head to the present.

Gillen stops in on a moment of comedic relief between the Norns before digging into the predicament that is Cassandra, Persephone, and Mimir. It’s here that McKelvie and Cowles utilized to the fullest with the meat of the issue being centered around people talking, expressing themselves, and realizing things. The art remains top notch and a lot of work has gone into this cast and their personalities should be well ingrained into fans by now. Cass and Persephone are continually breaking the mysteries surrounding Mimir, Ananke, and the great big machine and Gillen let’s the focal characters enjoy a breather in regards to moving the plot forward, sprinkling enough answers through conversation and revelations that’ll make you re-read the comic once or twice to hold us over for the issue with more shocking developments to follow. The inner dialogue of Persephone in the issue let’s us get inside her head and proceedingly catches everyone up to speed on the latest events while figuring things out for herself in the process. After the emotional heart-to-heart of last issue, seeing the wonderful and horror filled lives of the Pantheon have some forced downtime to figure things out is good with characters like Woden also help turn the wheels of the plot in his own way.

The cast, dialogue, and art of The Wicked + The Divine have always been shining spots of the series and this issue is no exception. Gillen let’s the focus of the big mystery breathe more and figure things out, letting characters find their footing through their feelings and the McKelvie expressions that have an energy all their own. Cowles lettering is some of the best work you’ll find in comics with each and every character having their own stylized words and design whether they’re connected to another God or not and it’s truly appreciated how tightly ran the ship is.

The Wicked + The Divine is nearing the conclusion to all of these mysteries sooner rather than later as this arc signifies the road to the finale. With an opener like this we’re hitting the ground running on some of the series bigger questions while still retaining the pop culture-infused comedy, character development, and colors that makes this series a vibrant comic from the warm colors of the desert to the cold and isolating cage of the Gods. The Wicked + The Divine is wonderful to look at and with Gillen’s writing remaining sharp and quick witted with his cast and keeping up with McKelvie and Wilson’s energy, the countdown to the finale of WicDiv is off to a great start.