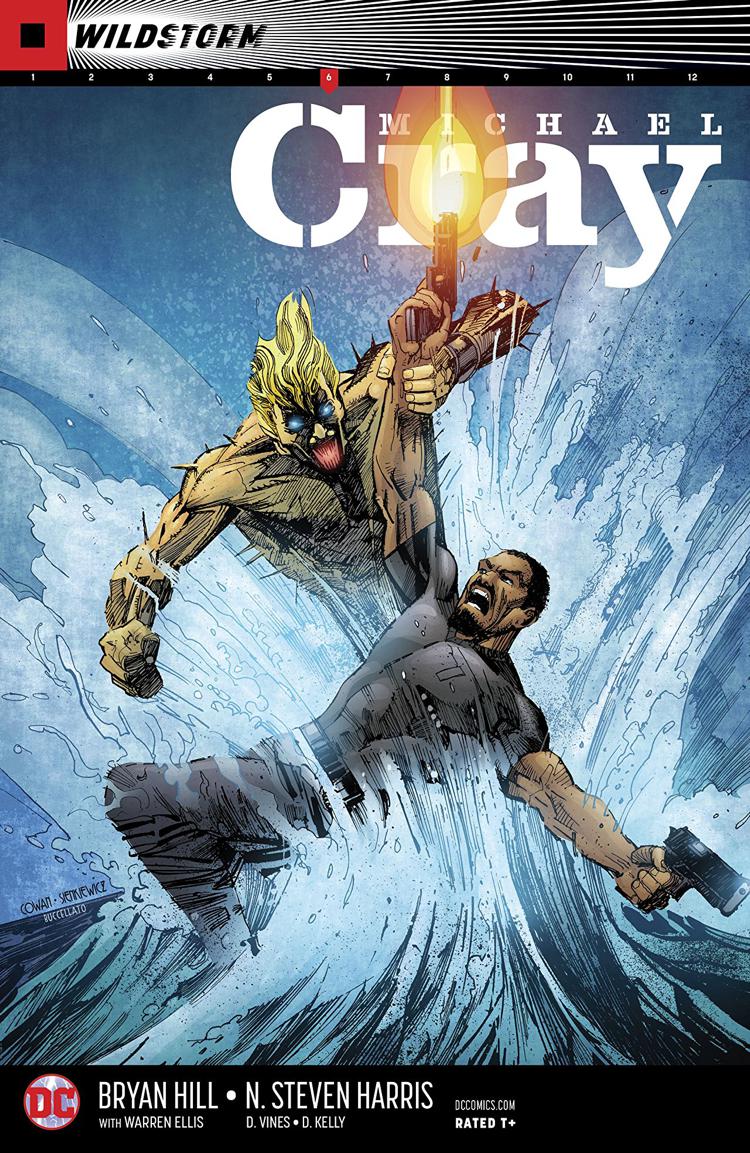 We’ve reached the halfway point of the adventures of Michael Cray and Hill turns everything on its head and reinvents the formula he’s been using thus far with Michael Cray as a title.

The conclusion to the Aquaman Caper is as bloody and ever-changing for the world of Michael Cray as you’d expect with signs of what’s to come for the remaining six issues of the series. Hill begins the decline of Michael Cray with the second half of the Aquaman mission immediately propelling our anti-hero into action to save the day and Harris panels captures only the most necessary panels for the situation. The panels are divided between Cray’s action and his ever evolving subconscious that is no doubt it’s own character in this issue, throwing a monkey wrench into the character of Michael Cray and how he operates in this issue.

The inclusion of his power getting a life of its own is the trigger of sorts and a catalyst for the things to come in this issue and the plot moving forward. Hill keeps things simple with Cray and his rescue and destroy mission letting Harris and Vines orchestrate a path of destruction and showing only what the page needs to show with the inking from Vines suiting the scenes on top of Kelly’s color and the usage of said colors given extreme moments. The attention to detail that Harris spends on the panels from the close-ups to wider locations helps the sometimes choppy art. Hill works with Cray and his alien virus in a type of relationship that has the two communicate back and forth with another, with the alien’s lettering and pages being vastly different from Cray’s world and lettering from Bowland.

What’s to follow is Cray enacting his plan of action against Aquaman and it’s a great place for the Kelly’s colors to shine as panels go by with minimal dialogue, letting Harris’s pencils speak for themselves with the action and characters stand out with the backgrounds being thrown to the side. Harris keeps a tight focus on our two warriors and following Hill’s script gives Cray some good emotional beats digging into his nature and how the alien bounces off of that. A nice touch is how the alien panels react to the happenings of Cray as he experiences them, guiding him and talking him through it in it’s purple hues. The Wild Storm’s Arthur Curry is another unique take on what we’re accustomed to seeing when it comes to the main universe’s Heroes. He doesn’t get a lot of time to make an impression but he does give Cray a worthy fight with the inclusion of sea life for a quick-witted battle of powers.

In between the Aquaman plotline in this issue, Hill creeps towards his next big bad revealing just who Cray will have to deal with next while he battles with Arthur and handles with his own demons. These scenes are drawn more dark and close to the chest as Harris keeps the panels only on certain body parts or shows just enough for us to get a clue to what’s going on, but as pages past and we reach back to that plot point it becomes clear with Vines inking and Kelly’s coloring sticking to muddled and solid characters throughout the more intimate session between the upcoming big bad and his unfortunate victim.

Hill continues to unravel Michael Cray open by peeling back layers to his character, discovering what’s making him tick, and putting him at odds with his supporting cast that could no doubt spell trouble for his remaining adventures. Hill continues to use the hunting and killing of mainstay DC Heroes to get into Cray’s head and use that as his own brand of character development, powers included. Every mission may end with victory but the toll Hill puts his characters through along the way is anything but clean and guessable. Michel Cray leaves his latest adventure with some moral hang ups that are marching him into the crosshairs of friend foe alike, and with the bloody battle of Aquaman behind him…the next battle on the horizon is sure to take our anti-hero to new heights and new challenges.