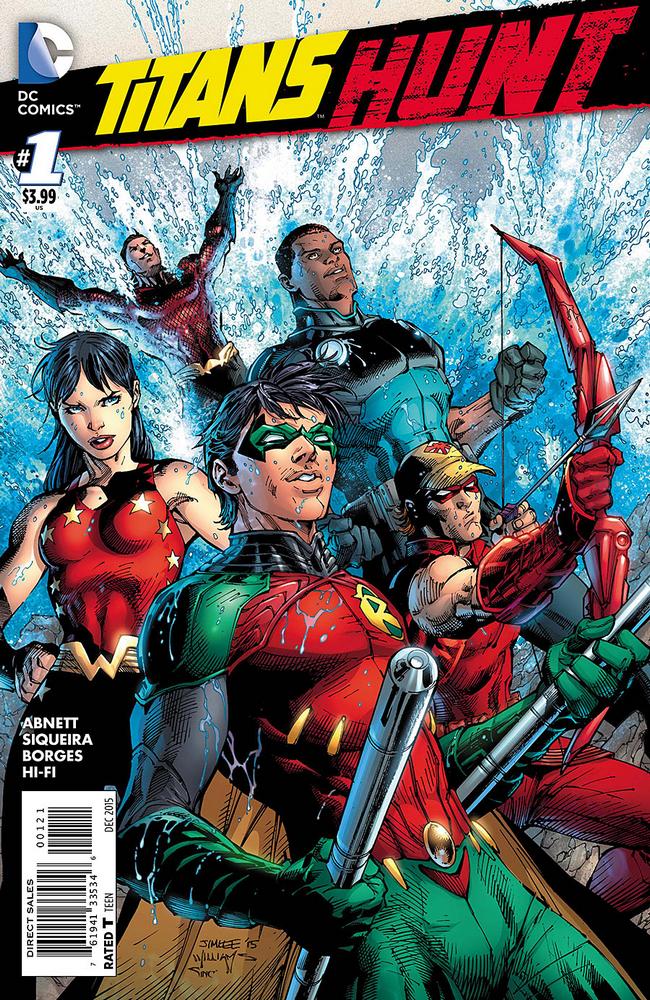 The secret history of the DC Universe is taking center stage as a Roy Harper, Dick Grayson, Donna Troy, and a host of other seemingly not connected figures start to find their lives overlapping with each other. In the eye of the tornado is Lilith Clay, counselor, psychic, and maybe… former Titan? The hunt is on for answers…

The original Teen Titans, for all their success as solo heroes in some cases (well, three cases), have experienced a pretty raw deal over time. Formed in the mid-1960s as a Junior Justice League of sorts, the Titans have always been central to the DC Universe — as characters — but rarely as a team. The obvious exception to this was a long and stellar run under the pen and pencil of writer Marv Wolfman and artist George Perez, respectively. The New Teen Titans, as they were called, set the standard for DC Comics in much the same way that the Uncanny X-Men set the standard for Marvel Comics. And yet, no creative team has ever quite been able to capture that same magic since, although many have tried.

What’s curious about Titans Hunt, which takes its name from a story that might have been the nail in the coffin for the franchise creatively (although to this day, I pretty much love it), is that it focuses not on the team’s most famous incarnation. Rather, this series pulls its inspiration in part from the incarnation somewhat just before the Wolfman/Perez series, a late 1960s run that embraced the concept of counter-culture, racial and social tension, and war. Robin, Wonder Girl, Aqualad, and Speedy (and Kid Flash, who is omitted here for somewhat obvious reasons) were joined by the flower child/go-go dancer Lillith, the social activist Mal, the man out of time Gnarrk, and the symbols of the Vietnam War conflict: Hawk and Dove.

Flash forward to 2015, and these Titans haven’t been linked to each other in years, having only cursory connections among two or three since the launch of the New 52. But lest we forget, these characters hadn’t had much of a strong conjoined narrative even before that. Every attempt to pull them back together felt forced in a way that could only inspire the most diehard of fans. The question remains, will this time be any different?

Honestly? It’s too soon to tell. Titans Hunt #1 does begin to weave an intriguing web of mystery surrounding these heroes who have now taken such divergent paths. Writer Dan Abnett, to his credit, doesn’t attempt to retrofit or recreate the sense of harmony that so many other writers have attempted to do with the team since the end of the New Teen Titans. There is no team, in fact. There are only people. And a file cabinet drawer full of secrets about how they’re connected. And only one woman who knows why. Talk about a great set-up for a mystery.

With shades of the original New Teen Titans origin that launched a legend, blended with more recent influences like Sense8, Titans Hunt #1 starts off simply enough: men and women experiencing some longing for memories long gone. And as their paths begin to cross, those feelings only get stronger. It’s a conceit that could easily get undone in its execution over time, but as an introduction (or re-introduction, as the case may be) to the concept of a team that never was, it’s pretty damn compelling.

Abnett is juggling a few characters with set personalities well (Dick Grayson and Roy Harper), taking on a few characters with negligible personalities (Donna Troy and Garth), and then resetting a few that are making their first “new” appearances here (Mal, Lilith, and Gnarrk). All feel right, especially Lilith, who may end up taking over the now vacated role of Titans den mother (I’m looking at you, Donna). Likewise, the cues to Titans history — that perhaps a newer fan might miss at this stage — feel like they’re building into something well-crafted and intriguing, provided it all means more than a little nod to fan service.

Artist Paolo Siqueira handles the character moments with beautiful detail and emotion, particularly moments of introspection with Roy and Lilith individually. Both characters feel very distinctive and are rendered at their finest when simply monologuing on panel. Where things start to feel a little stiff is in more dramatic action scenes, particularly during the fight between Dick Grayson and the Atlantean Garth. There’s just not quite as much fine detail coming through on Borges’ inks when the characters are in motion as when they are still. The result is a little bit of unevenness over the course of 20 pages, although nothing that would turn me off as a return reader.

Siqueira’s interpretations of some of the classic characters and their costumes (and physiques) is worth the price of admission, however. The flashback involving Donna Troy’s classic Wonder Girl costume does tug at my heartstrings, I must admit. But the character I’m most drawn to, oddly enough, is Gnarrk, newly code-named Cave Boy. Large and somewhat reminiscent of Cro-Magnon, but easily passing for human and not a caricature, Gnarrk could potentially fit with this group in a way that he never has before, and it’s Siqueira’s pencils and vision that’s paving the way more than anything else.

All in all, a strong debut for Titans Hunt #1, with the creative team setting up a mystery that has me intrigued, but also establishing a set of characters I can already feel myself drawn to in ways different from my connections with them in the past. Where this series will lead is still worth questioning, but for now, I’m satisfied to enjoy the hunt as it progresses.