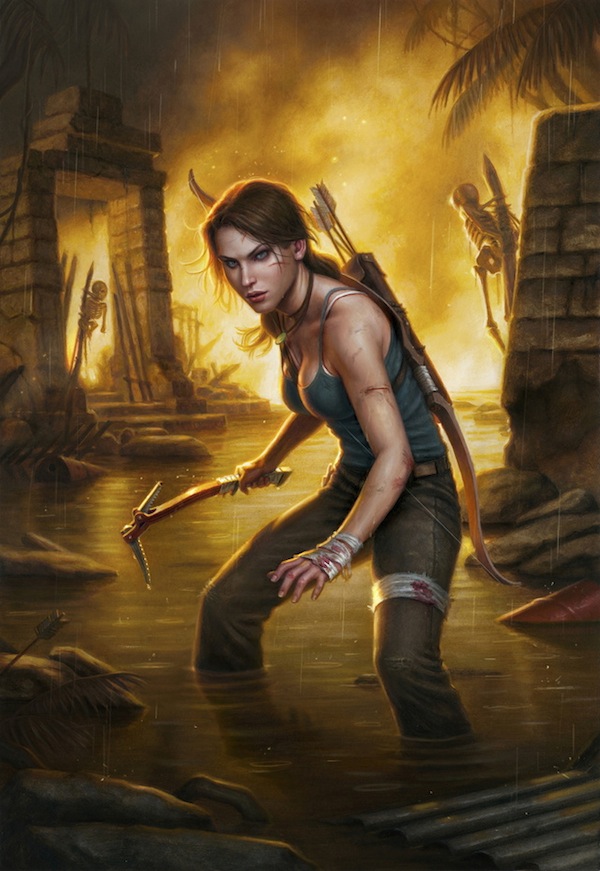 Following a series reboot that resulted in one of the most critically acclaimed video games of 2013, the Tomb Raider franchise makes its return to comics courtesy of Dark Horse Comics. Superstar writer Gail Simone picks up the story of the iconic Lara Croft shortly after the events of the game to tell an in continuity adventure that will lead into the eventual sequel. What should be the writer/character equivalent of a match made in heaven surprisingly results in a highly disappointing first issue plagued by bland art and a paper thin plot.

The last time readers saw Lara Croft in her own comic book was almost a decade ago, and over the course of the years a lot has changed for one of the most iconic female characters in video game history. After a few games and a lot of behind the scenes happenings, developer Crystal Dynamics and publisher Square-Enix rebooted the franchise last year. If you aren’t a gamer you may be surprised to know that the sex symbol Lara Croft played by Angelina Jolie on the big screen and last seen on the comic page at Top Cow is gone. If you’re looking for that classic take on the character you will be disappointed. The new take on Lara Croft is a far more realistic looking take on the character with toned down sex appeal.

As seen in the game Lara Croft is a young woman with the courage and will to survive on an island where her life is constantly in danger. On paper it would seem that this strong, smart, adventurous character is right in Gail Simone’s wheelhouse, as she is known for writing some of the all time great female characters in comics. Sadly it seems as if Simone is never really given the chance to write that character in this first issue.

The book starts off with bullets flying but quickly slows down to bring readers up to speed as to what happened in the game. The rehash is a must as there will be readers who haven’t played the game picking the book up due to either Simone’s name being on the cover, and/or the presence of another comic book featuring a strong female lead on the racks. The problem is that the book grinds to a halt when Lara’s internal dialogue introduces herself and the situation without telling the reader very much about what happened in the game. Without giving too much away we meet Sam, a friend of Lara’s (who will be familiar to people that have played the game) and then eventually Lara gets whisked away on another adventure trying to help another old friend. I never thought I would say this about a Gail Simone penned book, but everything felt so by the book and basic. The reader is given no real insight into any of the characters other than the island they escaped from messed them up. Lara’s internal dialogue has no flair to it, and reads very generically. Sam is there to tell us that the island is giving her sleepless nights, which is exactly the same thing Lara had done a few pages before. The only halfway interesting take on a character is Jonah and that’s because he is the character that drives the very little plot that there is forward, but even he is another case of the island driving the survivors mad. The tail end of the issue does feature a cryptic message and unexpected incident that raises some questions that can very well lead to an interesting story in future issues. As the story progresses and we get Lara Croft out on an adventure, hopefully Simone is able to open up and let loose with the script a little bit, because there are no signs of her signature style anywhere.

Artist Nicholas Daniel Selma joins illustrious names such as Billy Tan, Michael Turner, and Adam Hughes as artists that have drawn Lara Croft on the comic book page, and the first to render the new look rebooted Lara. Sadly, he doesn’t live up to the history that preceded him. The first page and opening scene look promising, but then generic character designs and a severe lack of detail end up being devastating. There are pages that take place in a trailer and one panel will feature the background while the next panel will be the same characters, in the same place with literally no background detail at all. There are just the two characters on white with nothing else in the panel. Not only does it look bad, but it is very confusing as a reader. Then there are some problems with Lara’s facial expressions, as often times they don’t match either the script or the rest of the art on the page. There are a few pages where things have hit the fan and Lara looks as calm as can be. Lara Croft may not be the same version as the virtual sex icon from 15 years ago, but the character shouldn’t look so plain and generic. I don’t think I would have been able to tell you what character I was looking at if I didn’t know what book I was reading. That just isn’t right for such an iconic character. All of these problems can’t be placed squarely on Selma as inker Juan Gedeon and colorist Michael Atiyeh are large contributors to the issues at hand.

I’m not sure how much creative freedom Simone was given to expand upon Lara’s character, but it sure feels like a situation where the writer is forced to work within the strict confines of what the IP owner has in store for the character. The issue is just generic and bland with no real selling point other than it takes place after the game. The only people I’d feel even halfway comfortable recommending this to are die-hard fans of the game who need to see what happens next by any means possible. I’m not a fan of being overly negative, as I know that people work hard to entertain us each and every month, but outside of the promising first few pages, and Jonah’s character there’s not much to be positive about. It’s sad that a comic with so much crossover potential, with what sounded like the perfect writer for the project, could be so disappointing.