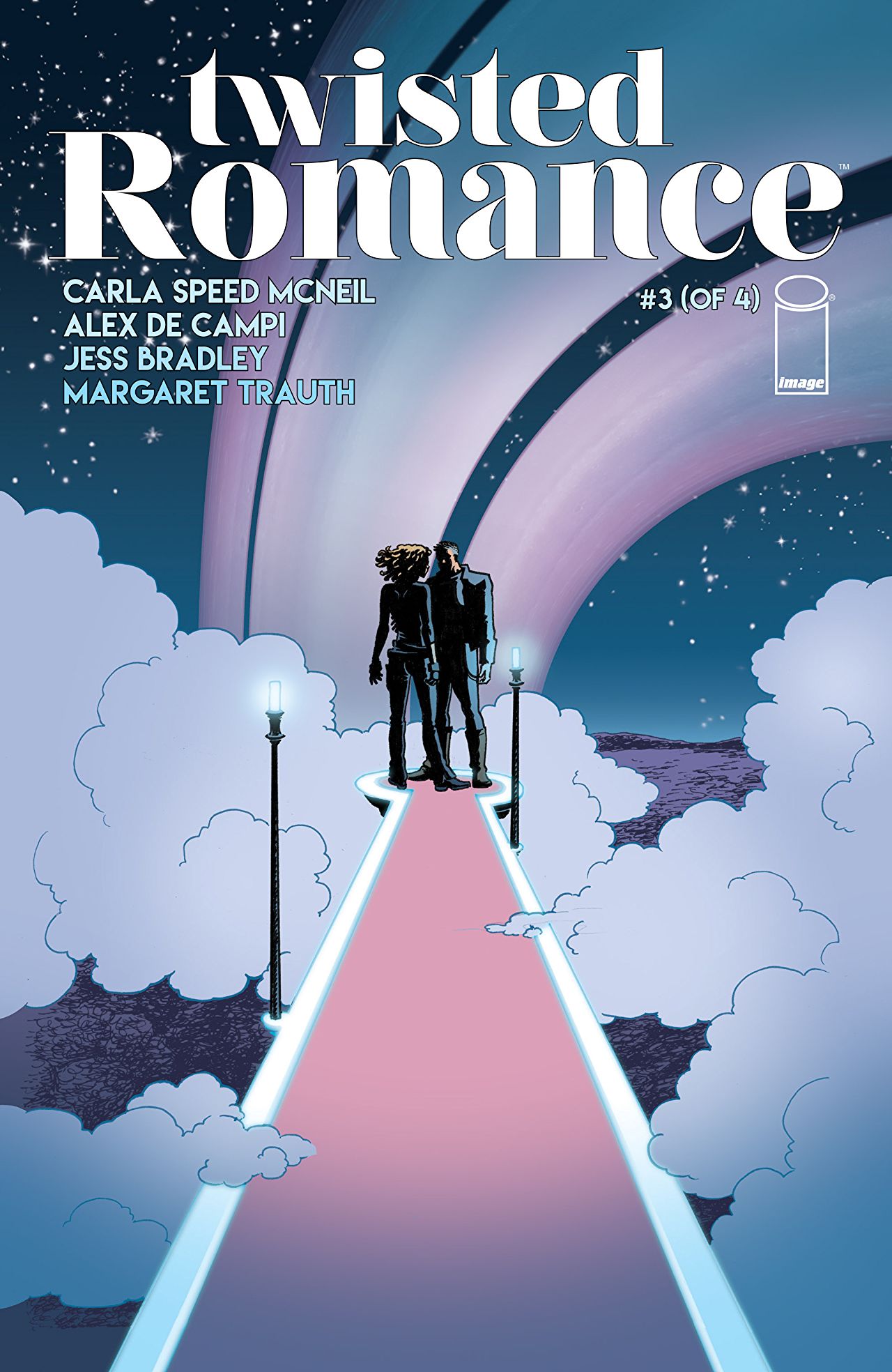 In this issue, the creators do well with bringing love that feels to be themed from a distance, love from people who are close to one another, but say nothing or portray nothing until towards the end of their tales.

The main story of the three, Invisible Heart, is a captivating tale of love found within enemies, of a space cop and a pirate’s fate’s intertwining after a chance encounter. de Campi produces a bounty of chemistry between the two. Captain Justin Rao and Black Domhnall seem sympathetic to each other’s points of views, and while Dom’s ideas about the world seem to rise above and feel much truer than the strange idealism and loyalty Rao has for the I.E.F., they both find a way to cope with their differing opinions and find happiness with each other.

The art is beautiful, a black and white tale told as if penciled in a black color pencil rather than penciling and inking. Movement flows on the page well through McNeil’s artistry. The faces are highly expressive, showing subtle wants, stoic indifference, and surprised remembrance and excitement quite well.

The second story, the one told as a straight up eight-page short fiction, is called The Last Minute. It is a tale of one-sided love in the apocalypse, following two people, possibly the sole survivors of an interdimensional invasion. Bradley’s choice of allowing the love to be unrequited feels so refreshing. Usually, it almost feels like an obligation to have someone say they love the other back during the end of the world and it’s great that Bradley doesn’t make the main character say it even when she wouldn’t mean it.

The third story, Olvia Lies, Pierced, tells the tale of a young friendship budding into possibly something more through flirtation and reckless behavior. I truly do love what Trauth does in this. The relationship between Olivia and Baron K is adorable. I loved watching them grow as friends through this show they both love, drawing closer and closer until Olivia realizes how she feels about the Baron. I like that it ends without tying up the loose ends. You don’t know what’s going to happen between the two of them, but you know something has changed in Olivia. It’s sweet.

Trauth’s art is also adorable. I love how it feels as if she cut ever color individually from sheets of paper and created this collage of awesome. It’s really quite stunning.

If you love short tales of romance, definitely check out Twisted Romance. Each issue of the anthology series has been fantastic thus far and I can’t wait to read more tales of love.