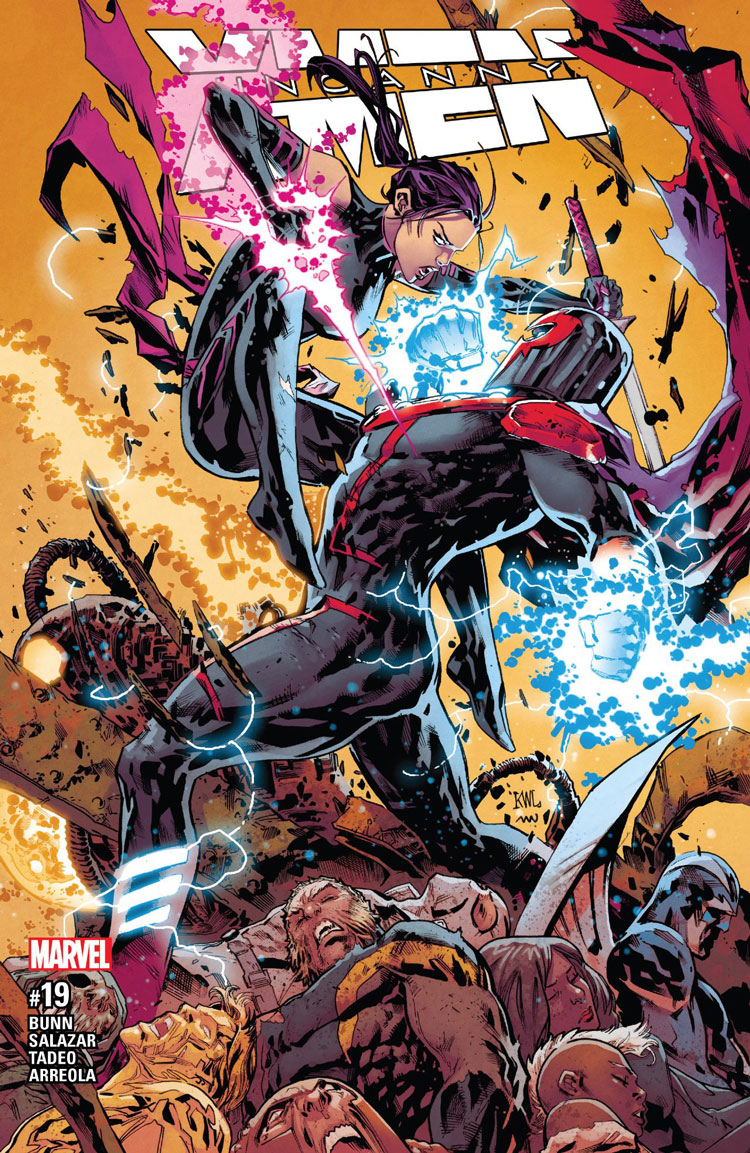 With Uncanny X-Men #19, Cullen Bunn’s run on the title reaches it’s natural conclusion, a fight to the death between Psylocke and Magneto.

It clearly feels like something he always intended to feature but one has to wonder if it was meant to come a bit later than after a mere 19 issues, a chunk of which were obligatory crossover tie-ins. It works, mainly for it’s wonderful art and sharp dialogue, but it seems that Bunn had much more story to tell in his tragically short Uncanny X-Men run, but decided to give it his intended ending nonetheless.

Psylocke and Magneto’s relationship has its roots in Kieron Gillen’s Uncanny X-Men run a few years ago. It’s a refreshingly non-romantic relationship in which the pair have an obvious mutual respect for each other despite Psylocke reprimanding Magneto’s more ruthless activities. Magneto brushes off her judgement, claiming that she’s simply projecting her guilt over her own questionable choices, which is an idea that Bunn seems to imply is correct.

He turned their relationship up a notch when Psylocke finally had enough of Magneto’s backdoor scheming and stopped working with him. She basically put him on probation after that, promising to watch him from the sidelines and if he continued to cross the moral line while protecting mutantkind, she would kill him.

The specific action of Magneto that causes Psylocke to deliver on that promise in this issue is never made clear. There’s a line or two about his involvement in Inhumans VS X-Men but his and Psylocke’s role in that event was virtually the same, they both stepped in line under Emma’s plans. You could argue that Psylocke wasn’t made aware that Magneto was being controlled by Emma in the final battle but regardless, there’s no clear tipping point. Without anything solid to rally behind, the ensuing fight suffers dramatically and it can easily be interpreted as a huge overreaction on Psylocke’s part.

Bunn later introduces the idea that with the Inhuman threat gone, mutants have this grand second chance and Psylocke thinks Magneto’s methods will sabotage it. It’s an interesting concept and one that has a real backbone, given that Magneto has really only been an X-Man when mutants have their back to the wall.

Bunn would have been more than welcome to expand on that idea and make it Psylocke’s reasoning alone. Getting rid of the murkiness surrounding Psylocke’s motives would’ve made this a much stronger character arc than it is. Bunn, a writer who clearly plots for the long haul seems to have had his master plan cut short and needed to improvise.

But since this is the ending, Bunn is obligated to tie up all of his other remaining plot lines as well. Not wanting to take any time away from the main event, Bunn has Psylocke quickly catch Magneto up on where the rest of the team ended up, insulting him by insinuating his poor leadership skills tore the team apart. The writer doesn’t so much put a pin in any of his subplots, as much as he leaves invitations for future writers to pick them up. Fitting since Bunn himself is a writer that embraces continuity and uses dangling plot threads and intricate character histories to his advantage.

Even if you don’t find the story to be dramatically satisfying, you’ll still enjoy watching Psylocke and Magneto at each other’s throats thanks to Edgar Salazar’s dynamic penciling. The fight is kinetic, filled with creative use of powers and tense moments. It’s instantly memorable and Ulises Arreola’s bright colors saves the bitter fight from being too bleak, instead showcasing it as a gorgeous battle between two seasoned superheroes.

The majority of the issue is double-paged spreads, making the issue feel a bit short, but I wouldn’t trade in those gorgeous full body shots of Magneto and Psylocke sizing each other up for anything.

Even if this ending feels premature, there’s been enough subtext throughout Bunn’s run that allows you to interpret the reasoning behind this conclusion. Here we have that rare superhero fight with two heroes that are not only evenly matched but have equally strong and realistic convictions. That’s the benefit of Bunn writing these characters with such complexity, using their rich histories instead of ignoring them and we can only hope that the next writer taking the mantle picks up on that thread.