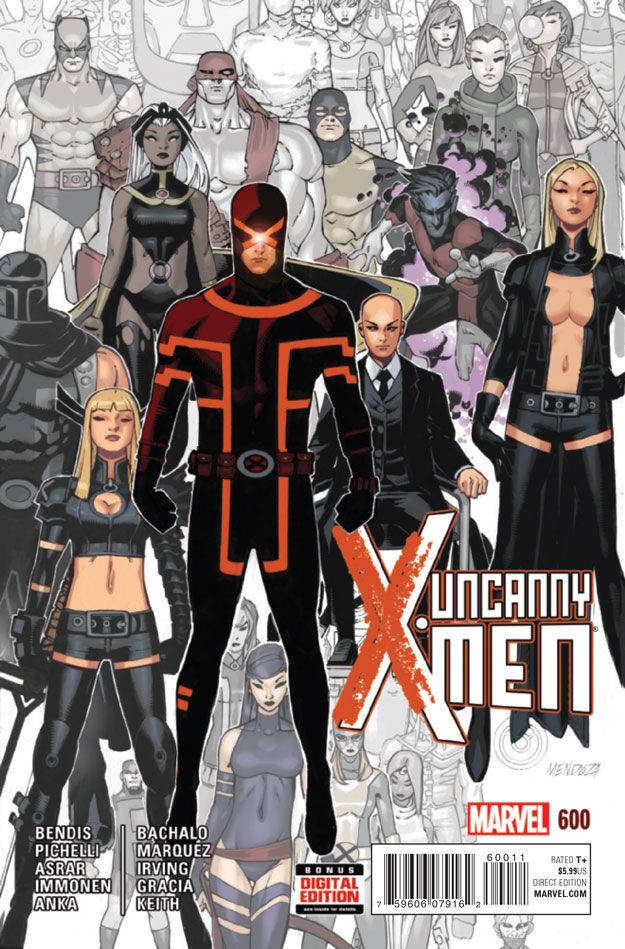 Not only does Uncanny X-Men #600 mark another anniversary milestone for the X-Men franchise, it also happens to be the last issue of Brian Michael Bendis’ run on the series. With this being his final chance at writing the X-Men for the foreseeable future, Bendis has little choice but to dedicate much of the issue to tying up various subplots from both his time on this title as well as the other X-Men flagship title he headlined, All-New X-Men. Fittingly, we get an issue that’s much like his run: a mixed bag of small successful bits scattered about a bigger picture that completely falls apart when looked at as a whole. Oh, and as always, paired with the best artists Marvel has to offer.

Bendis attempts to frame various dramatic scenes with the overall, bigger plot of the X-Men staging an intervention to confront Beast about his reckless actions of late, namely pulling the Original X-Men from the past to the present where they are now stuck. Most of the smaller scenes work well because the X-Men are so comfortable with soap opera storytelling. You can pair two characters, such as Colossus and Kitty Pryde, and have them catch up and given the chaotic nature of the X-Men, this could automatically erupt into entertaining conversations. You don’t have to necessarily know the details of Colossus’ and Magik’s feud to appreciate the sibling hug when they make up. Bendis’ smart dialogue helps but when you have characters with such loaded histories like the X-Men do, these scenes almost seem to write themselves, resulting in organic and emotionally honest moments. Unfortunately the scenes that depict the “Trial of Hank McCoy” are practically interchangeable. The confrontation never evolves into a debate or even a discussion and you’re left with the feeling that neither the characters nor Bendis himself really planned out this intervention throughly.

I’d be remiss not to bring up another reason why this issue is so important: it solidifies the coming out story of one of the Original X-Men, Iceman, a character that’s been around for over 50 years. Despite listening to criticism of this particular subplot when it was introduced months ago, Bendis shows no restraint. If you weren’t fond of the Younger Iceman’s coming out scene in All-New X-Men #39, don’t expect any sort of backtracking or apologies in this issue. It’s not exactly a home run but it does strike quite a few emotional chords until Bendis inserts some of his trademark humor that falls flat. Completely out of place and playing on stereotypes, Bendis undermines a massive personal moment and consequently, cheapens it. Trust me, when a closeted man comes out for the first time, after years of denying it, it’ll take them a little bit before they open up about which guys they find hot and yes, that’s even if you’re talking with a younger version of yourself. This particular coming out story, one that involves time-travel and the potential of alternate versions, is something you would only find in the wonderful medium of superhero comics and fans can only hope this botched and rushed subplot will be gloriously expanded on in future issues.

There’s over a dozen artists credited on this issue, mostly made up of the collaborators Bendis has worked with throughout his run. Everyone from Sara Pichelli to Chris Bachalo. The artists are well matched to the scenes they’re given and although there’s some slight hiccups with so many artists such as costume inconsistencies, it’s a gorgeous issue with each artist nailing the big emotional moments of their scenes and plenty of pages that will have you pouring over to find the many mutant cameos.

If you’ve hated Bendis’ take on the X-Men, this issue will only cement your stance. If you’ve been a fan of the past eighty or so X-Men issues that Bendis has written, you’ll love the various character moments but even a diehard Bendis fan will find it hard to see this as a satisfying end because whatever Bendis was building towards, it certainly doesn’t payoff in any of these pages.