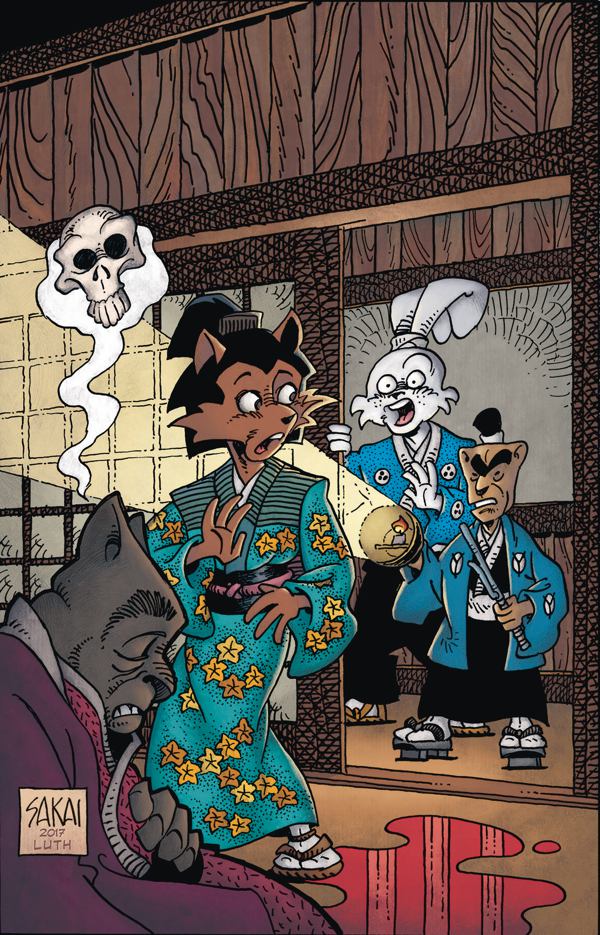 “Once a loyal retainer until his lord’s death in battle, Miyamoto Usagi is now an unemployed ronin walking the warrior’s pilgrimage, in search of harmony.”

Congratulations, you now know everything you need to know so that you can start reading this series immediately. The Usagi Yojimbo series as long been a staple of the comic world we live in, yet it can seem daunting to just pick up an issue of a series that has been going on for so very, very long.

The beauty of Stan Sakai’s writing is that, while his story does progress over time, that is not explicitly the kind of thing that is going impede one’s enjoyment of a series about a wandering ronin (a samurai with no master, for those don’t know) rabbit.

Issue #161 is even billed as a great entry point for those who might wish to start reading, and this reviewer agrees wholeheartedly.

The story focuses at first not on the titular Usagi, but on Kitsune, a thief, who has broken into the home of a renowned doctor in the hopes of looting his treasures. The story is really that simple and that is something unique about what Sakai does frequently, he tells stories that have a clear beginning and ending which do not demand a chronological understanding to enjoy. When you meet characters like Kitsune for the first time, it is clear what her motives are, why she does what she does, and even what her character limits are when faced with a challenging dilemma. While some of Stan’s writing may seem ‘on-the-nose,’ his skill in telling a great story has not diminished in decades.

If you are unfamiliar with Sakai’s art, it is amusingly straightforward. The characters are all animals (Usagi means rabbit in Japanese, Kitsune means fox, etc…) and their expressions are varying and (sometimes) exaggerated. The work may not appear as complex as other art in many comic titles released today, but the somewhat minimalist, black-and-white appearance of the comic has allowed Usagi Yojimbo to maintain a great sense of integrity over the decades. Sakai’s humor is for all ages, but the tone is something that anyone will find something to enjoy. If you’ve ever wished to read a great on-going series you’d be able to share with anyone, of virtually age, this issue/series is it.

This particular arc in the series is presented as “part 1 of 2,” so be sure to pick up with sequel component when it comes out. Usagi Yojimbo may well be a series that is over thirty years old, but if you’ve never read anything with Sakai’s characters, don’t worry.

Pick this issue up. Check it out. Find and order older trade editions of Usagi’s adventures and keep reading as new issues come out. You’ll become an expert at knowing the in’s-and-out’s of Usagi’s world in no time.

ALSO! After you finish the main story, there is a small preview of a chibi-Usagi story, one where the characters appear in a more cutesy, large-headed manner. It appears to look adorable and its art is done by Julie Fuji Sakai and Stan Sakai together. Tom Luth also provides beautiful colors for the cover of the issue.