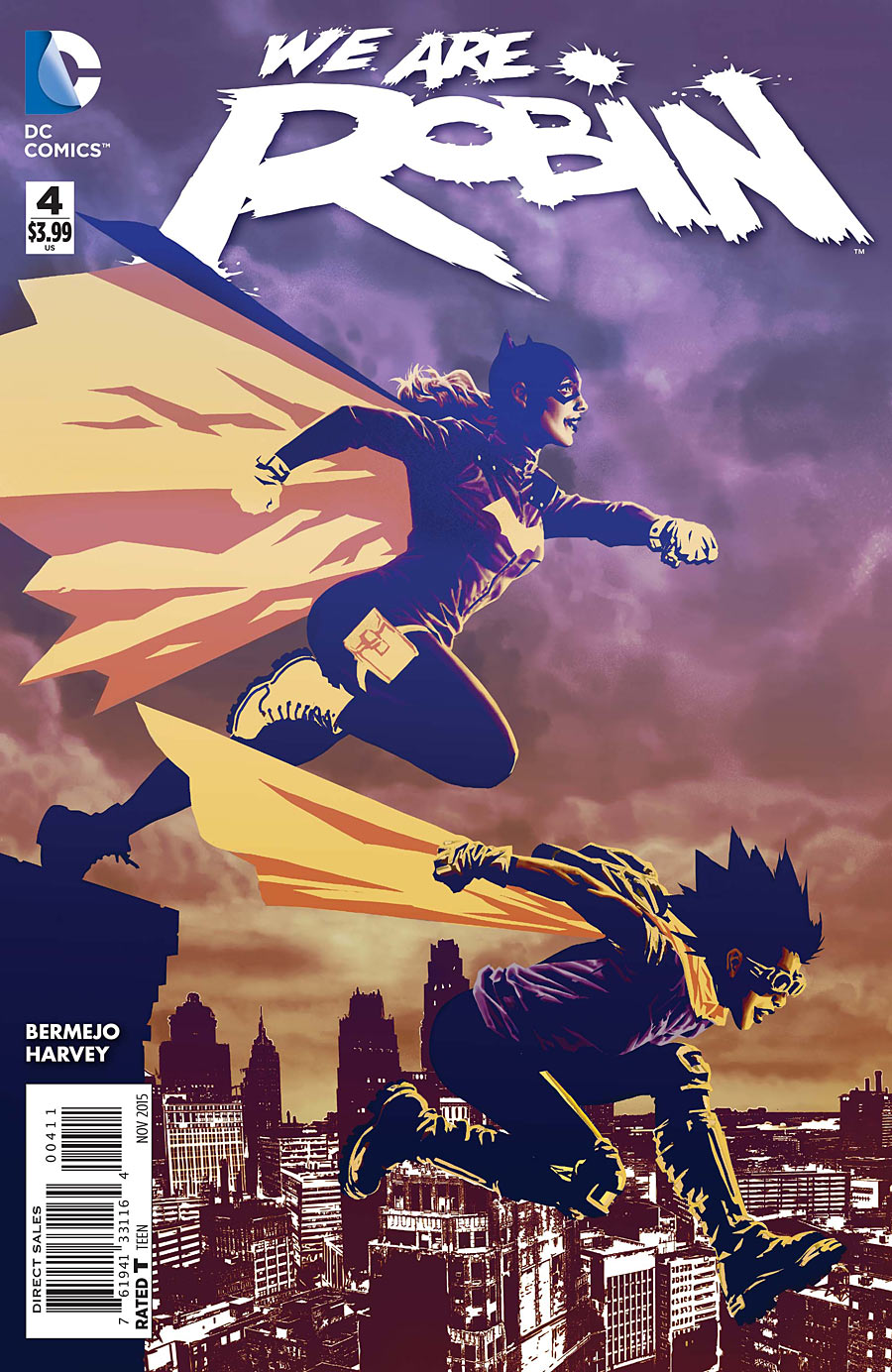 A Robin has died, and it’s time to reflect on what it means to be running on rooftops at 16. The Robins will all deal with the loss of TheTroyWonder in their own ways, but R-iko’s path to reconciliation crosses with that of her personal hero — Batgirl! Nothing like a little heart-to-heart (and boot-to-face) to cheer a girl up…

It’s interesting to have a book in the market today that feels like it captures the reality of life for so many young people of color in 2015 the way that Teen Titans captures the life of the young white kids of the mid to late sixties. Like The Movement before it, We Are… Robin is less a super-hero book and more a reflection on youth culture as filtered through capes and emblems, with a cast of characters that may not even understand what it all means.

It helps focus the narrative in that issue #4 centers on the aftermath of #1-3 through the eyes of a single character, R-iko (not to mention the handy-dandy guide to characters in the rear of the issue. I needed that in issue #1.). With a little room to breathe and dig into R-iko’s psyche, Bermejo shows us who the young lady is, and she’s… not that extraordinary, really. She’s moody (her comrade did just die) but not processing the grief the way an adult might. She’s bold enough to not know her own limitations, and get caught up a little in them along the way. Basically, she’s your average teenager, and in a universe filled with either teens who act like adults (Teen Titans) or kids who are intellectually gifted beyond normal expectation (Gotham Academy), it’s kind of nice to see adolescents that are making it up as they go along. And probably fucking it up.

Bermejo weaves in ideas and panel flashes from Lord of the Flies, which seems apt generally, but leaves me questioning its deeper meaning. Yes, it may feel like TheTroyWonder died by their groups’ own hands as Piggy had in the novel, but those of us versed in super-hero tragedy (as Batgirl adequately represents in this issue) don’t necessarily see it that way. There’s an honor to Troy’s sacrifice that just wasn’t present in Lord of the Flies, but I guess that may beg the question: is there really?

While I don’t anticipate that the Robins will one day be “rescued” from their savagery by their adult guardians — such as they are — I do wonder if all of it is for naught. Is there an impact to be made, as Batgirl suggests? Is the problem they’re confronting bigger than what a few super-villains (or some kids setting a bonfire on a rooftop) can muster? These questions abound for me, which isn’t a bad thing. It speaks to how rooted Bermejo’s take is in the real world, where kids can get provoked by police for walking down the street if they’re the wrong color. Or where poverty breeds hopelessness, or worse — a life where you have nothing left to lose.

Joining Bermejo on this issue is guest artist James Harvey, whose pastiche-style renderings of life through R-iko’s eyes captures the book’s feel perfectly. I know that part of my hesitation with We Are… Robin has been its art style — one that just doesn’t mesh with my personal taste. Harvey completely overcomes that objection for me in a big way, giving us something distinctive and funky, sincerely youthful, discordant, and raw. With every page so beautifully constructed, but at the same time creating this overwhelmingly jumbled feeling, Harvey’s work on this issue captures the idea of trauma not able to be resolved in spades.

It is interesting that as characters move out into the outdoor world from interiors, the scenes get more cleared of clutter, as if the fresh air and open sky dissipates some of the crushing elements of being inside your own head (and a little bit inside everyone else’s online these days). But the scenes beginning this issue, of R-iko’s reflections on Duke’s arrival and Troy’s demise, are jam-packed not just with little details, but also with the most gorgeous of textures and patterns. It’s as if Harvey pieced together fabrics or construction paper to build R-iko’s memories by hand. It’s a little reminiscent of printmaking, a little bit of old-fashioned Ben Day dot patterns. Either way, it mixes the feel of old and new processes just right for a book about traditional heroism clashing with modern economic and social reality.

Will I feel as compelled to follow We Are… Robin once the focus returns on multiple characters and the regular series art team is back in the saddle? I’m not sure, but I do feel like issue #4 was the break in the action I needed to get up to speed and appreciate a little of the psychology behind the book. Bermejo and Harvey have taken us into the book’s premise in the most thorough way I’ve seen so far, and left us with a feast for the eyes and mind in the process.