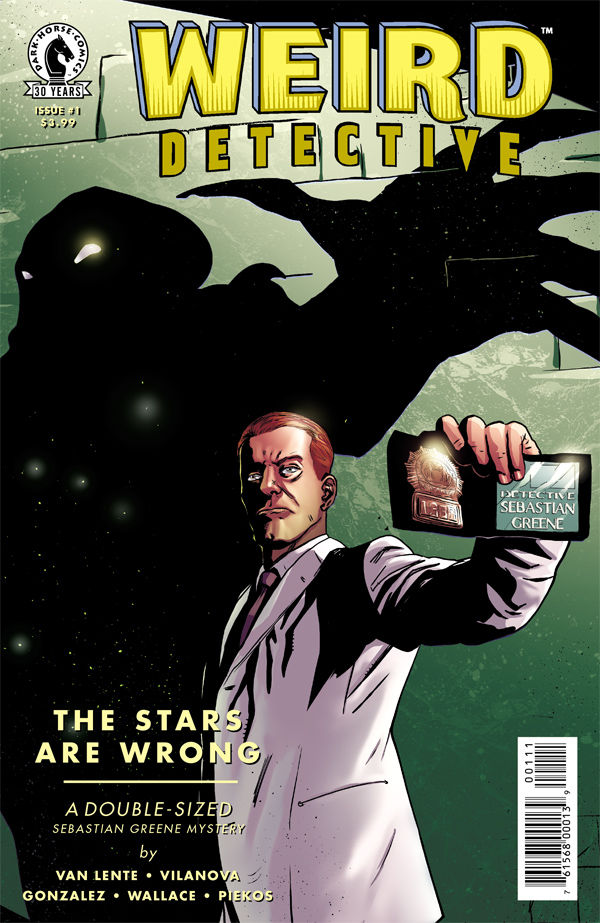 Weird Detective #1 opens with a cosmic observation about the mind being able to correlate all its contents. From there, writer Fred Van Lente and artist Guiu Vilanova serve up a comic full of horror and crime with an apparent side of science fiction.

The cover of Weird Detective #1 features a smartly dressed man flashing a detective’s badge at the reader. On the behind him, the man is casting the shadow of a Cthulu-like giant, with a star-spattered body and glowing eyes. From the start, Vilanova and cover colorist Mauricio Wallace give readers plenty to absorb.

Inside the book, Vilanova, Wallace (with co-colorist Josan Gonzalez) and letterer Nate Piekos present a sensory barrage as kids can barely contain their glee at a public pool on a summer day. Vilanova’s art is realistic and detailed, swaddled in rich, black shadows befitting a noir crime tale. The colorists keep the characters realistically toned throughout the story, but whenever the setting calls for it, sickly yellowish-green tones wash over the backgrounds and scenery. Piekos’ lettering is aptly appointed as the story demands, keeping the art clean, but serving the purpose of illustrating various sound effects, like a head bouncing off wrought iron railings or a baby screaming for comfort. Piekos provides different caption narrations for Sebastian Greene and his new partner, Sana Fayez. The letterer also gives the mental communication, branded mochadin, a distinctly different appearance from verbal communication, adding creepiness to the already imaginative story.

Mochadin, along with ranos and rennakesh, is presented as one of the other twelve senses (seventeen in total) that Van Lente has imbued Sebastian Greene with. Through the description of these other senses and their application to Greene’s duty as a detective for the Minor Crimes unit, readers get to know Greene and are able to start gleaning the fully-formed story that Van Lente has certainly crafted for this series’ lead protagonist. An other-dimensional being, apparently sent to stem the invasion from beyond, Greene is accustomed to working as a loan wolf. Fayez is assigned to work with him, which adds a buddy cop layer of entertainment and humanity to this story, as Greene masks his true identity and purpose. Sometimes his rationale involves Canada, which Van Lente presses to humorous ends throughout Weird Detective #1.

Considerably entrenched in the realm of horror, but equally formed from crime noir, Weird Detective is a story that gives readers a lot to absorb, a lot to enjoy, and even more to look forward to. A quick description of this story could be erroneously branded as “Van Lente’s take on the Martian Manhunter’s secret detective identity, John Jones,” but that description would be selling this story short. Van Lente has crafted a world so fully formed that Dark Horse seemingly had no other choice than to give readers a double-sized first issue. With forty-four pages of story filled with masterful art by Vilanova, this comic delivers for the price, and will certainly win fans over quickly. I took a look at this comic more out of curiosity of the title than anything else. Once I saw the cover behind the title, I couldn’t help but open it. Now, I cannot help but ask for more of Weird Detective. Now. Please. Even though I’m not from Canada, I really do enjoy the adventures of Sebastian Greene and want to read more of this crime noir horror buddy cop adventure mystery.