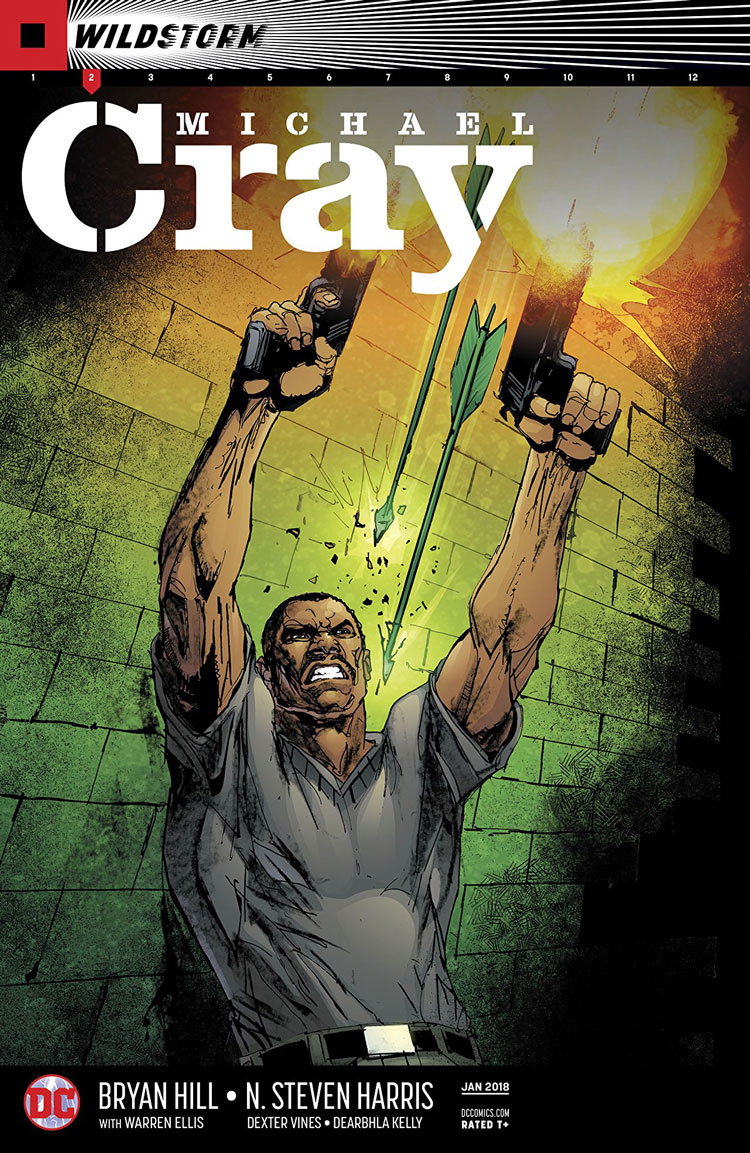 The life of Michael Cray grows even more complicated in the second issue of the twelve issue series features everything from getting his own team together, further explanations and usage of his fledgling powerset, and murder. Just another day at the office for Michael Cray.

The issue starts in what’s to be revealed a Victorian background and introduces us to Cray’s team that are making sure to stop him based around their plan to wall him in. Each of them get their own panel showing their place in the plan and a little about Cray in the process. The short conversations between the three are funny and in line with their leader about their collective line of work, that’s to say they all have their own thoughts on Cray.

Hill continues to build on the foundations of issue #1 while letting Michael carve his own corner in the Wild Storm Universe and the steps to letting him stand on his own are here. He writes Cray as a sly individual, an intellectual, and guarded enough to keep his team — and his handler Trelane — at an arm’s length even when the mission is a team effort.

Harris shows his work of capturing action and characters with his pencils early on in the Virtual Reality simulation. The panels are dispersed into smaller bite size spaces, showing how each panel adds to the overall flow of the page and isolation to the snapshot style of Michael moving about and eliminating his team with ease. Kelly on colors uses this to her advantage in several spots.

The colors are solely to help the characters stand out more with Vines’ inking in tow. Color snaps into focus with whatever scene Michael finds himself in, switching from dark to light while never compromising where Harris sets him up to be or missing a beat with the scene transition.

The more pressing matters of the book are told in a conversation with Michael’s doctor with close ups on both of them throughout their conversation. The two dig into the type of smart science that is featured all over The Wild Storm.

This dialogue continues the evolution of his power set and brain and it’s a focal point of this issue as time passes. Hill matches the both of them as smart people tip-toeing around the issue at hand and it’s written like a tension building thriller. These are people perfectly fine with the world that they live in and the writing reflects that. Instead of littering the background with signs or distractions.

We get the general gist of the area, wherever we happen to be and focus on the people and the talks that follow. Keeping the interest on the characters makes way for the eventual action and mission of killing Oliver Queen to take place and Hill doesn’t disappoint, throwing us into the plan without missing a beat.

The pacing for the issue might be too sudden and quick paced for some but that’s also part of the fun of Michael Cray’s world, it’s short, sweet, and to the point providing you with everything you need to know about the issue and the characters that inhabit it.

Wild Storm Oliver Queen is reminiscent of General Zaroff from the story “The Most Dangerous Game” by Richard Connell. He’s not our DC Rebirth Oliver to put it frankly. He monologues about humanity and being a monster that finally gets to hunt, the island teaching him his new found path. We don’t dwell on Oliver Queen and his teachings because the hunt is on and Michael Cray has a job to do.

The intricate and thoughtprovoking ideas of the day take leave for an explosive confrontation that takes things we know thus far about Cray and put them to use, lessons of the day per se. Kelly’s colors are on full display as the jungle setting is set ablaze and the fighting commences. The letters from Bowland are faintly used, letting the panels speak for themselves and we see every jab and blow from the fight! The fight takes a turn as Cray inadvertently uses his talents at his disposal to cut the battle short.

The remaining pages act as more setup for the next adventure and fallout of the Oliver Queen caper and throws some eye raising hints about our cast and potential plot lines for the next ten issues. The future’s looking bright for Cray, as seeds….or weeds are being planted for the future of the title and the progression of Hill charting his adventures is something to stick around for.

Michael Cray is a book brimming with quiet tension as it turns everything we think we know about the known DCU and flips it on its head in a new light. Combine that with the characterization of Cray who’s exactly the the type of character who can lead a book and with Hill’s smart writing keeping things focused on the cast and letting Harris, Vines, and Kelly do the heavy lifting in letting the art and colors speak for themselves is something the book does well.

Michael Cray knows what type of book it is and doesn’t lose focus along the way: all killer, no filler.