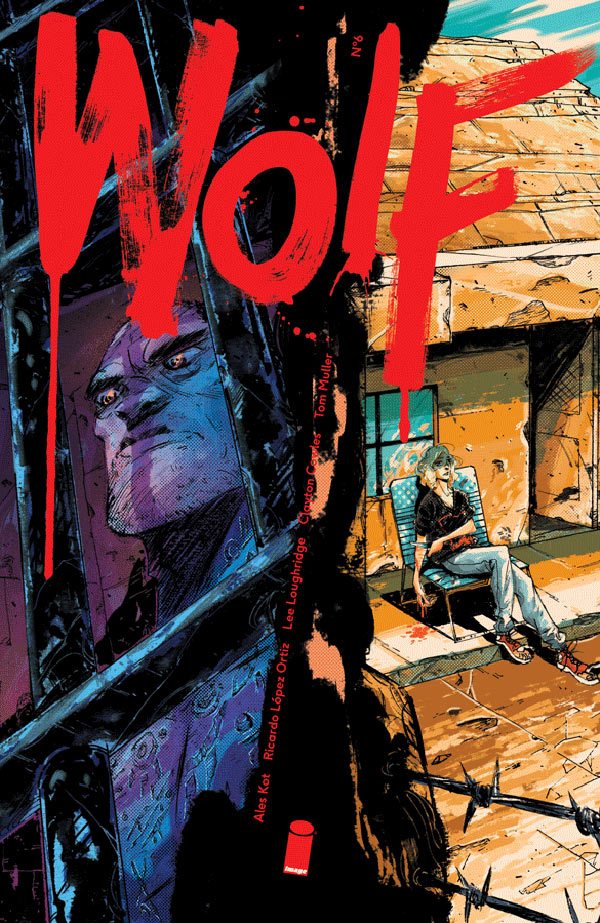 There’s fear, loathing, and several miles of desert to cover as Wolf’s motley crew assemble to bust Antoine out of prison.

When Ricardo Lopez Ortiz joined writer Ales Kot and colorist Lee Loughridge last issue for the arc opener, he brought a fresh new energy to the title that set a whole new tone. But as he settles in this issue, his work does a lot to clarify why his and Matt Taylor’s contributions play so well off each other. With Wolfe as the focal point of the first arc, Taylor’s loose, sometimes indistinct style worked to compliment the protagonist’s laconic personality. To Wolfe, for the most part things are fairly simple and he takes them as he comes.

Shifting to Ortiz as the focus turns to Anita brings with a headrush of kinetic energy, using sharp angles and frenetic lines to convey the intensity of going through puberty as a werewolf. Things slow down and Ortiz cools down from a mess of urgent lines to still textures. The perspective shifts from her recollection of the last time she saw Wolfe to Freddy Cthonic getting her up to speed on his own efforts to find their immortal friend while she’d been doing her own snooping. But the tension in his art persists, ready to lash out at any moment. Ortiz’s take on Anita’s werewolf form is a real treat that easily can shift from full bore murderous creature of the night to a confused and worried teenager who is also a giant wolf.

The execution of the issue is the most novel of the series so far, told mostly in captions down the left side of the page matched to panels down the right side to differentiate Anita and Freddy’s recollection of past events from the normal pages that weave in and out from it in the present as they fill in the gaps to combine efforts. With the introduction of Duane, Wolfe’s brother whose place he took in jail, comes scans of Anita’s journal intercut with gorgeous splash pages bookending Antoine’s arc from the moment we first saw him in flames at the top of the Hollywood hills to the impassive walls of the prison he’s currently incarcerated in. The penmanship on the first scanned page as Anita begins her investigation is loose and open but still shot through with capitals and sharp underlines, brilliantly evoking the agitated motion of a teenager, while the second gets more cramped and urgent as her frustration mounts.

There’s a deep reinvestment on the title from the entire creative team on this arc, who are clearly committed to bringing out a sense of fun and kinetic energy in the proceedings, which is a significant tonal shift from not just the first arc, but the previous issue as well. The last entry, which was Ortiz’s debut on the title, brought a similar energy level to Anita’s pages, but overall the issue slowed to a more somber tone when depicting Antoine’s incarceration and the flashback to his time in Iraq.

Similarly, Lee Loughridge begins broadening the palette on colors, opening with brightly contrasting oranges and blues for the flashback to Anita trying to drive across the desert as a werewolf. It tapers of for much of the scenes in the present, but he brings those contrasts back out to communicate the time lapses in the flashback stories, closing out the issue as the gang drives off in search of Antoine with a complete inversion of the blues and oranges that it opened with.

Ales Kot projects a brand new level of confidence on Wolfe, taking the first solid steps away from convention with Ortiz and Loughridge creating a distinctive look of their own.