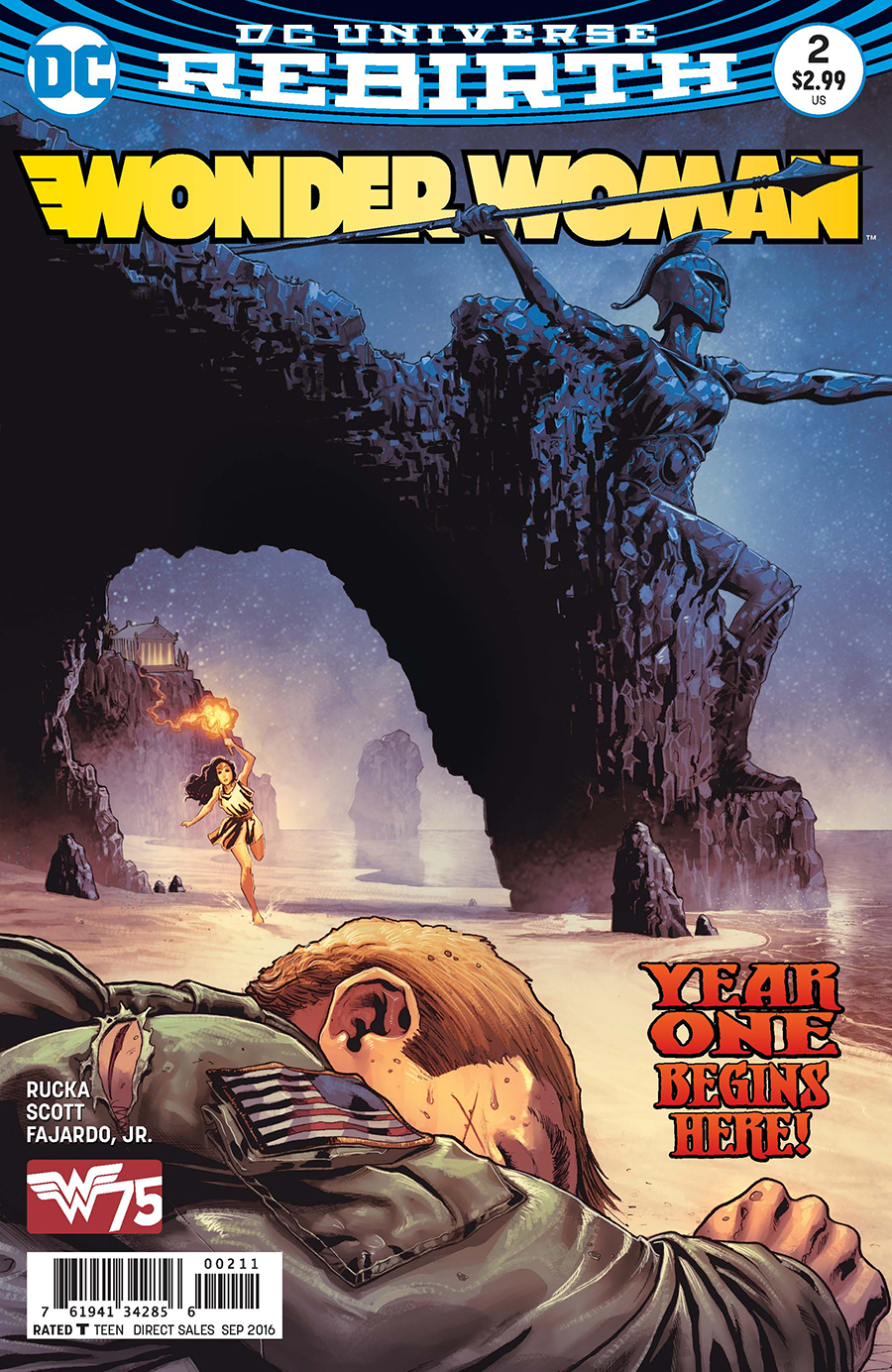 A look back at Wonder Woman’s origin once again, as Steve Trevor crash lands on Paradise Island, this time meeting a young woman who yearns to see what’s beyond the horizon while her sisters look to the stars. These two will find their fates entwined just as an ill omen threatens Diana’s future.

It is an embarrassment of riches to have not just one, but two storylines, each running once a month, on Wonder Woman, from one of the book’s most celebrated writers and two of the most astonishing creative teams in the industry. Three weeks ago, I was wowed by the intricate detailing and fantasy stylings of Liam Sharp. Now, it’s time to talk about Nicola Scott.

That’s if I can muster the words amid my utter and complete awe.

Contrast Scott’s youthful Diana to a fairly recent artist on the same title attempting to draw an adult Diana with infantilized features, and you only begin to see the mastery of this artist’s craft. Scott’s young Diana feels like an actual, living, breathing teenage girl, with an enormous range of emotion delivered with very slight facial variances. It’s majesty to watch how, from page to page, this young princess can move from forlorn to happy to bored and then maybe even a little snide — all with just minor eyebrow raises and lip tucks.

Most artists take this range and exaggerate features to get the desired results, but it’s emblematic of Scott’s prowess that every adjustment she makes is a subtle one, reflecting how most of us express ourselves physically over short periods of time. And more than just making Diana feel consummately human, Scott delivers a young woman you can’t help but fall in love with. When she looks saddened by her limitations, I feel sad for her. When she raises her eyes in a soft fear before a twisted, dead-limbed tree, I get a bit of a shiver too. And feel that sharp bite three panels later as if it were to my own wrist.

Between Scott’s naturalistic rendering of Diana herself, the landscape of the island, and the wildlife, it’s difficult not to step back a little in awe. This feeling is only punctuated by Fajardo’s soft, impressionistic colors wafting over the island grass, streaming between columns into the temple, and glowing out of Diana’s own warm expressions. As a result, everything on Paradise Island feels a little bit more magical than it does in Steve Trevor’s home world — as it should.

Rucka does an exceptional job setting up a very different — but in some ways, much more classic — rendering of Diana’s childhood, showing not just closeness with her mother, but with her friends/sisters on the island as well. It’s hard for me to discern whether the writer is setting up school girl crushes, intense friendships, or genuine same sex attractions among the young ladies — and in some ways, I suspect, all are probably true on an island such as Themyscira.

But nevertheless, the subtlety and warmth conveyed in the interactions between Diana and other girls, from latching arms to longing looks, is a great place to start expressing the origin of this sort of deep love for humanity Diana has. It’s an environment that couldn’t possibly produce anyone other than the kind-hearted Wonder Woman Rucka is known for writing.

You can sharpen a character. You can give her an edge through age and over time. But if you don’t begin with kindness, like with any human, it’s not something one can teach. Because Wonder Woman wasn’t born of strife. Her legend, as Rucka shows already in one succinct chapter, was born from love.

A series that genuinely gets better and better every single issue, Wonder Woman has far outweighed my expectations from the start — and those expectations were high indeed. Rucka, Scott, and Fajardo have begun something exceptionally beautiful here, from top to bottom, and it pains me to have to wait a month for the next installment. Thankfully, in two weeks, we’ll be graced with Liam Sharp’s next installment, and I may very well be saying the same thing all over again.