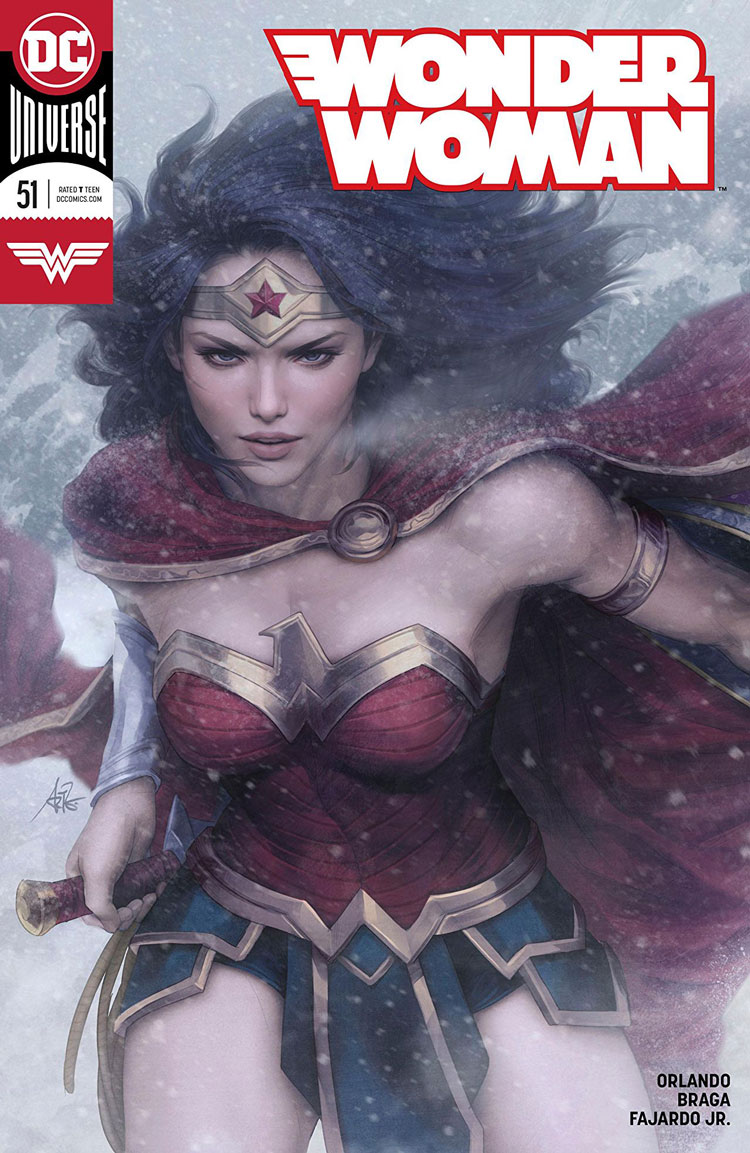 After defeating the assassin Mayfly in battle, Diana delivers her to the Slabside Prison in Antarctica — and returns to continue the work of befriending her, month after month. But will Moon Robinson turn the corner as Diana hopes?

There’s a lot to be said about how Wonder Woman is different from every other super-hero in existence.

Her creation, as the fulfillment of Charles Moulton Marston’s belief in the unique power of women, is so far flung from the pulp origins of most super-heroes of her era. Wonder Woman is no Doc Savage or the Shadow wannabe. As much as her introduction was meant to fill the role of a Superman for girl readers, an inspiration for their independence and self-esteem, she’s no mirror to the Man of Steel.

Superman is a fireman, reactive to danger, ready to fight the good fight and then move on to the next.

And sure, Wonder Woman may be the second in line to save that kitten up your neighbor’s tree. But she is so much more.

What this single issue illustrates so plainly — delivered elegantly by writer Steve Orlando and artist Laura Braga — is that Wonder Woman is in it for the long haul. If she puts out the fire that destroys your family’s home, she’s not only find you a place to live while she rebuilds your house, she’ll also make sure you eat three meals a day, and get a ride to work. She’ll research Facebook photos so she can duplicate every item inside and the exact color swatch of your walls, and even make sure that the notches in the door frame marking your kids’ growth from infancy to their teens are reproduced perfectly.

In short, she’s not just a fireman. She’s a healer. She’s a therapist, of sorts. Or maybe just simply, she’s the best friend you’ll ever have.

And who wouldn’t want that?

Even Mayfly can’t ultimately resist the compassion and care of the woman who once boasted she could “make a hawk a dove.” Orlando gives us these fleeting moments of interaction between the two women — one determined to wear a tragic history on her psyche like a shroud of anger, one determined to simply give all she has until the other is willing to throw that shroud to the ground.

It’s not difficult to feel for Mayfly, even to feel for her commitment to her own anger. Anyone who spends more than a little bit of time in therapy probably realizes how hard it is to let go, to release yourself from the burden of defining yourself by what’s been done to you, not by what you’ve done. There are going to be set-backs, to the degree that even as Orlando’s tale ends, you have to wonder if Moon will fall back into her old ways.

What I don’t have to wonder, after 20 pages of Orlando’s patient depictions, is whether Diana will be there waiting.

Teaming with Laura Braga on art that focuses far more on interpersonal glares and body language at rest than fight scenes — the latter of which are probably the only weak moments graphically — the creative team really highlight what differentiates Wonder Woman from all of her cohorts in armor or tights. Braga ensures Diana holds the room, no matter what is happening in scene, but never in a dominating way. It’s almost as if she is making the reader admire the Amazon, against our wills — her panel outlines a lasso that compels us to see the truth of who Diana is, and what she wants for us and everyone around her.

Small details, like Moon’s foot fidgeting, or the way she leans her head backward when lamenting her childhood, are Braga’s secret weapon throughout Orlando’s narrative. It would have been so easy to deliver a book full of talking heads that completely misses the visual power of redemption, not through savior behavior, but through friendship and compassion. All that nuance is retained, in spades, throughout.

No issue of Wonder Woman is a bigger break from what came before — and a stronger reminder of exactly who Diana is — than Wonder Woman #51 as executed by Orlando and Braga. The hero among heroes is in safe hands in the coming months, thankfully. And while it’s long overdue, it’s also great to know Diana has been waiting for us all along. We just had to find our way back to her.