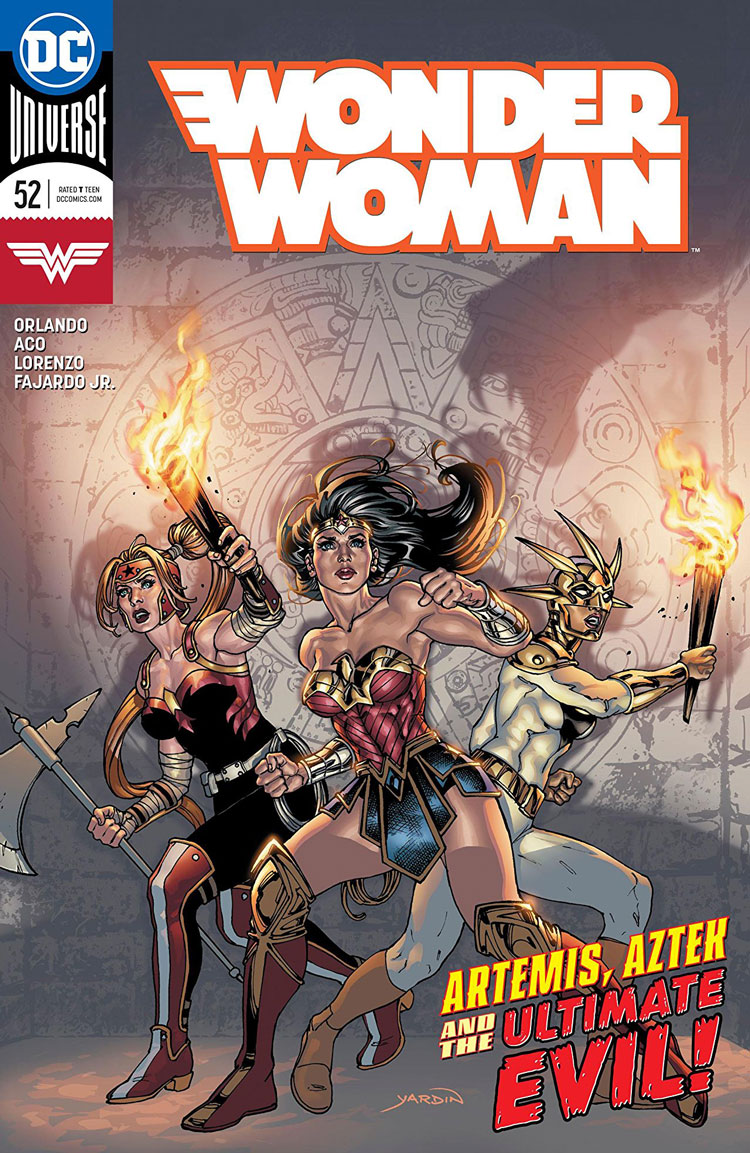 And you thought Diana’s gods were tough. Meet Aztek the Ultimate Woman, last warrior protecting the world against the Aztec god-gone-amok Tezcatlipoca. What Wonder Woman and Aztek are soon to learn is that a long-lost Amazon is trapped in the heart of the Thirteen Heavens — requiring a little more muscle. Enter: Artemis of the Bana-Mighdall.

Let’s not beat around the bush. If there was ever an artist born to draw the psychedelic spatial distortions of an ancient Mexican pyramid in 4D space, it’s ACO. After his gorgeous stints on DC’s Midnighter (again alongside writer Steve Orlando) and Marvel’s Nick Fury, ACO is unequivocally one of my favorite artists, and due in no small part to his ability to warp space and time so elegantly that the reader barely knows which way is up.

It’s the kind of page structure and scene-building that reminds me of classic Frank Quitely channeling Grant Morrison scripts, a hand extending from a maze of wild ideas and dimensional thinking that necessarily explodes in-between the panels. And the comparison doesn’t stop there, of course, as Orlando is undeniably channeling a little Morrison magic of his own, having resurrected Aztek from the mists of the D-list graveyard.

A version of the character who barely appeared in a half-dozen panels, Aztek — in this case, a young, indigenous, Mexican woman named Nayeli — is the driving force in this first part of four, bringing Diana and Artemis together once again to fight a mad god in Mexico. Her vision of Diana’s kin and Artemis’s hero may be the motivation, but it’s Aztek’s own sharp personality and fierce dedication to challenging the god Tezcatlipoca that makes her the perfect companion to the two Amazon women.

In the process of elevating the Ultimate Woman and her mission, Orlando and ACO take us on a wild journey into the heart of eighth metal technology that is so foreign and insanely crafted that it may as well be magic. It’s a world worthy of Diana’s interest, and yet so utterly foreign to the kind of crusty, Old World stylings of the Olympian set. And yet under the pen of these two gentlemen, Diana and Artemis take to it with natural ease.

It’s not a far cry to see Gal Gadot in ACO’s insanely beautiful rendering of Diana’s fierce determination and grace, but there’s something a little more macabre about this Wonder Woman. Maybe it’s a reflection of her surroundings in a 4D fluctuating space, or maybe it’s simply an aspect of the Amazon Princess (like last issue’s deep dive into the very nature of her compassion) that we don’t get to see that often. But it’s there, in the turn of a wrist and the way she seems to float above the page. She is not of the page. The page is of her.

The start of a brand new story that promises to lead Diana and Artemis to a few new corners of the Earth, Wonder Woman #52 is once again Orlando and ACO working science that looks like magic together. Like space unfolding, this book is a visual and character-driven delight, revealing more the deeper you let yourself fall into it. And I’m ready to go all in once again.