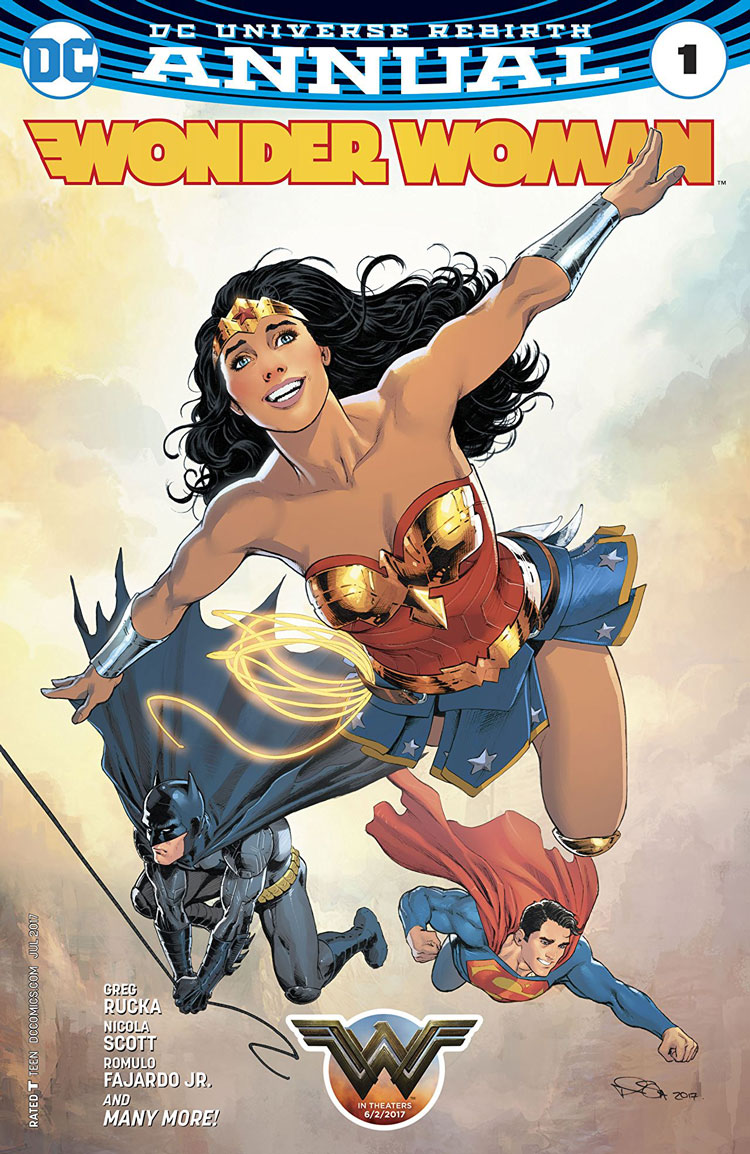 Four different tales of the Amazon Princess grace this Annual, beginning with her first meeting with Superman and Batman, and ending with facing off against a Kaiju on the Pacific rim. And throughout, we get to see a showcase of Diana’s relationship to conflict, violence, and killing, once again proving how complex a figure Wonder Woman actually is.

It is a common misnomer that Wonder Woman’s publishing history is inconsistent. She — like all super-heroes pushing past 70 years — of course has had her ups and downs, her middling runs butting up against extraordinary insights. But there is something about the work of those who truly get her (and that’s more than one would assume outright) that embraces what is actually complexity of character and philosophy, not actually inconsistency.

Because it is hard for humans, particularly Americans, to rationalize multi-faceted representations, particularly in the face of an increasingly polarized political atmosphere, Wonder Woman is often relegated to dismissal by fans who don’t want to wrestle with her depth of character. And this annual, butted up against both the current Wonder Woman run and Greg Rucka’s original, stands as an interesting encapsulation of the complexity of Diana’s experience and ethical determination in regard to peace, violence, culpability, and ultimately, truth.

Certainly, the world’s relationship to truth is under fire more than ever before, and Rucka’s first story here, alongside his “Year One” partners Nicola Scott and Romulo Fajardo Jr., reflects a very real gap between Diana’s fundamental goodness and the Batman’s cynical first impression. The twist, of course, is what reveals the very essence of Diana’s nature: she is not some cardboard cutout of a comic book hero. She is at her most core a truly good human being, and a smart one, whose complex understanding of how to diffuse conflict is second to none.

Scott’s rendering of Diana’s youthful look, placed firmly in the second act of “Year One,” perhaps reflects a young woman whose philosophies haven’t been tested as they would in later years. But what it doesn’t reflect is naiveté. Scott’s Diana is clever, confident, and firm with the men without being bossy. But by the end, she is the meter to which they need to measure themselves against.

And so begins a series of tales that keep coming back to the core conceit of “when is it alright to kill?” What is the truth behind that act of violence that must be wrestled with before execution? We hear repeated by Superman early on in Rucka’s tale that Diana managed to subdue all the gunmen alive. Flash forward to her defense of King Shark against an ultimately revealed plot to shift blame for a political coup. It would feel as if Diana were categorically opposed to the Markovian death penalty, but the reality is much more shadowed.

Vita Ayala’s King Shark is not a monster. Flash backward to Wonder Woman’s classic (and subsequent) confrontations with Medusa and Maxwell Lord — both that ended in her opponent’s deliberate death at her hands — and you have an interesting contrast. Monsters, it seems, come in every shape and size, but so too do flawed beings that may just look the part of a monster.

Ayala and Roe give a strong sense of how little a dilemma this is for Diana, but again, it’s not about black and white morality. It’s about the truth in culpability and to whom (and how) one must answer for your actions. We see a similar tale from Lanning, Kelly, and LaFuente wrapping up the issue, taking a literal misunderstood monster and giving Diana a very clear mandate for his protection. It’s a fun, energetic story, but it misses a bit of the pathos of the other three in the issue.

But perhaps that’s a fair trade-off in terms of what it does return to the narrative table, which is a certain lightness and innocent play that we get with Rucka and Scott’s early years and tend to lose even in the brightest moments of Wonder Woman’s stories in the 21st century.

Nestled into the center of the book is Michael Moreci and Stephanie Hans’ more challenging tale of Diana’s conflict, and ultimate mercy killing, of a warrior cursed by his own dedication to his people. It’s once again an interesting conundrum in terms of how Diana would rationalize the act of violence she needed to perform to save lives — and in the truest sense, this other warrior’s personal honor.

Moreci lays out the conflict without either overburdening Diana’s conscience or making light of the gravity of the decision. But, all told, it is Hans’ rendering of the battle, their sword fight across the snowy fields outside of the vulnerable village, that reflects the stakes of the inner conflict.

And these are yet only four glimpses of this complex weaving of truth with violence and peace, culpability and innocence, that seem to pepper the most honest stories about Diana. Wonder Woman Annual #1 doesn’t posit four points of view, but rather images out the true robustness of the Amazon Princess’s character. We may not want to accept that a fictional heroine can be so many things, have such a verisimilitude of philosophies that drive her character. It’s difficult to be sure. But that’s part of what makes Wonder Woman so rewarding, and so enduring, 75 years later.