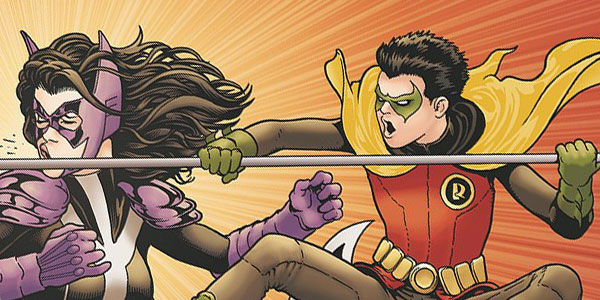 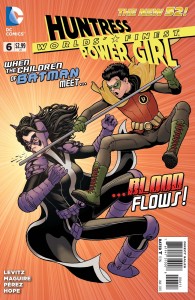 The children of the Batman finally meet, as Earth 2 refugee Helena Wayne faces off against prime Earth mainstay (and little bugger) Damian Wayne. It’s the Huntress versus Robin for the title of best offspring in what is probably the most fun issue of Worlds’ Finest yet.

One of the great things about a title like Worlds’ Finest (or its pre-New 52 precursor Superman/Batman) is the potential for touching on multiple characters in these two often very different worlds. Yes, Power Girl and Huntress make sense together, perhaps even more than Superman and Batman these days, but the real treats are going to be the moments of casual crossover — will Power Girl get caught staring at Nightwing’s butt, and how will Huntress react when two versions of Kara are staring her in the face? These are the moments longtime comic fans live for, and one of the key benefits to having a fresh history behind all of the characters. We can live that joy for the first time, all over again. The arrival of newest boy wonder Damian Wayne, the first of Kara or Helena’s expanded family to stop by for a visit, is a complete joy for me as a result.

Maguire handles the bulk of this issue, no longer dividing pages temporally with Perez, but taking on the Huntress’s perspective while Perez illustrates from Power Girl’s point of view. The division of labor still works pretty effectively for me, although it does make Kara’s appearance on the last page or so a bit jarring in comparison to those earlier in the issue. Nevertheless, Maguire delivers on what is certainly one of his great fortes — heroes fighting with just a bit of humor and irony in the mix. Every panel features a different smirk or expression on the part of both Helena and Damian, drawing focus in such a way that I feel the relative lack of background detail to be an asset, not the usual disappointment when it pops up in comics here and there. Maguire really nails Helena’s movements here, exhibiting on the page what her “no-so-brother” identifies as an inheritance from the Catwoman.

Levitz’s dialogue feels genuine for each of the characters, especially given the oddball nature of their meeting, and I’m particularly enamored by the verbalized observations each make as they battle. Where Robins learned to talk constantly when engaged in a fight, I’ll never know, as it clearly wasn’t from their father, but all of Batman’s children — genetic and adopted — seem to suffer from the same running of the mouth. In that sense, it’s a delight to see that commonality and more between the characters. The only thing that felt slightly off to me was Helena’s seeming openness about her true identity. After five years, why now? Nevertheless, I suspect a bit of that will be explained in the follow-up next month. While this issue’s plot was relatively light, starting a shorter, more whimsical story after somewhat of a dragging first four issues is a welcome change. Overall, Worlds’ Finest #6 was a totally fun comic book. Here’s hoping we see more of this style in the future of the title as well.