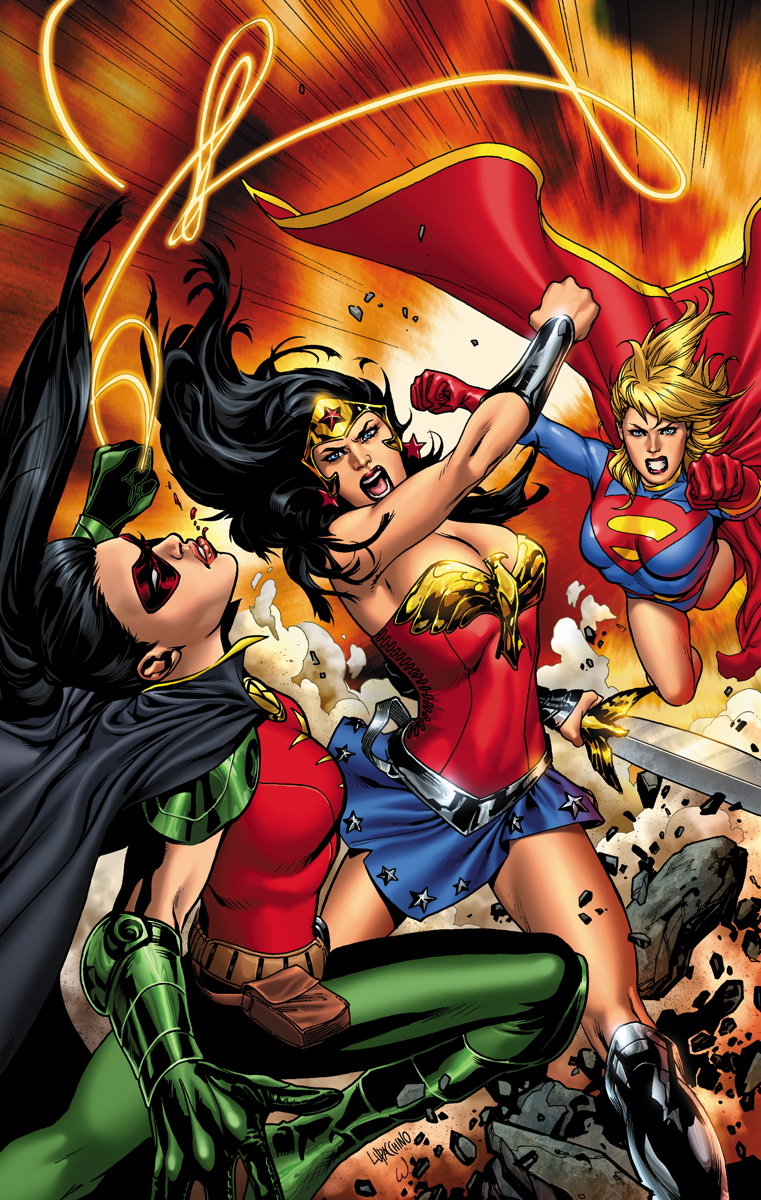 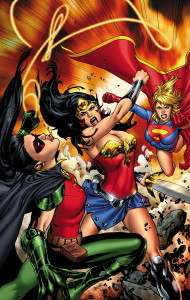 Time rewinds as we look back at the Huntress and Power Girl’s early days as crimefighters back on Earth 2 in the form of Robin and Supergirl, sidekicks to that world’s finest super-heroes. Each young woman takes the limelight for a story, culminating in a third concluding chapter that pits them against none other than the original Wonder herself, Wonder Woman, and her erstwhile daughter, the Fury!

Paul Levitz has been caretaking these two women since the day they left their home and found themselves amid a gaggle of other super-humans on Earth Prime, only occasionally looking back at their earliest days in the past year. As a result, these glimpses — deliberately few and far between — have a natural build-up that not only creates anticipation, but makes that undiscovered history all the more precious. Presented with new formative stories for each of the heroes, I’m left wondering why I was looking so forward to it. Worlds’ Finest Annual #1 feels less like an event, a rare gem of the series, and more like an inventory story.

We get to see Helena teaming with her father in the days just after Catwoman’s death. It’s sort of a strange balance between overprotection (but not too much) and complete confidence (but not really) for Batman to let his daughter run solo, and it makes for a somewhat muddled personality on this version of the Dark Knight. He’s neither the doting father nor the grieving guardian, and it doesn’t make for the most dramatic conclusions. As a result, the stakes don’t seem that high for Helena, and the victory pretty banal. Kara’s depiction is more compelling, sneaking off on her own to experience the world in defiance of her cousin’s directive (that Kal already knows is being violated and doesn’t seem to make a point to correct), and I appreciate the rendering of a girl who’s been kept in isolation suddenly being able to encounter a young person of the opposite sex. However, the resolution on that encounter is pretty sudden, and again, Kara’s reaction is neither devastated or cavalier, but somewhere half-heartedly in-between.

The real trouble with this issue, though, is that it was sold as THE encounter between Wonder Woman and the two youngest of the Wonders, and that exchange takes up the whole of 4 out of 38 pages. I don’t like to be a page counter in evaluating the quality of any book, but that encounter could really have been something special, and what we’re left with is a cliffhanger I’m not sure continues on in the monthly series, and a brief confrontation that leaves me pretty unsatisfied.

Neves’ pencils are fair throughout, the best renderings being of the most opposite type: Supergirl in her “secret identity” as a civilian and Batman in action in the first of the three stories. His Batman and Robin channel some strong, classic super-hero action, with Robin’s facial expressions coming out perfectly throughout the course of the fight. Kara too exudes a perfect beauty in the scenes where she first meets Ken, but as the issue progresses, the linework gets less and less controlled, leaving several instances of all of the women looking distorted in the face and oddly rough-hewn. Fury is rendered harshly, which is ok for the character, but the underlying Amazon grace just doesn’t shine through as it has in other renditions to date.

High expectations led to low satisfaction in this case, as Worlds’ Finest Annual #1 took what should have been a special event along the lines of the Silver Age annual crossovers of worlds, and made it into a story that could have been told anytime, and with little fanfare. I, like many Earth 2 fans, want a deeper look into what made the Huntress and Power Girl who they were before their recent travails — not to mention clues about the world of 5 years ago — and unfortunately, I came away with little to none of that. Here’s hoping the next flashback opportunity can dig a little deeper.