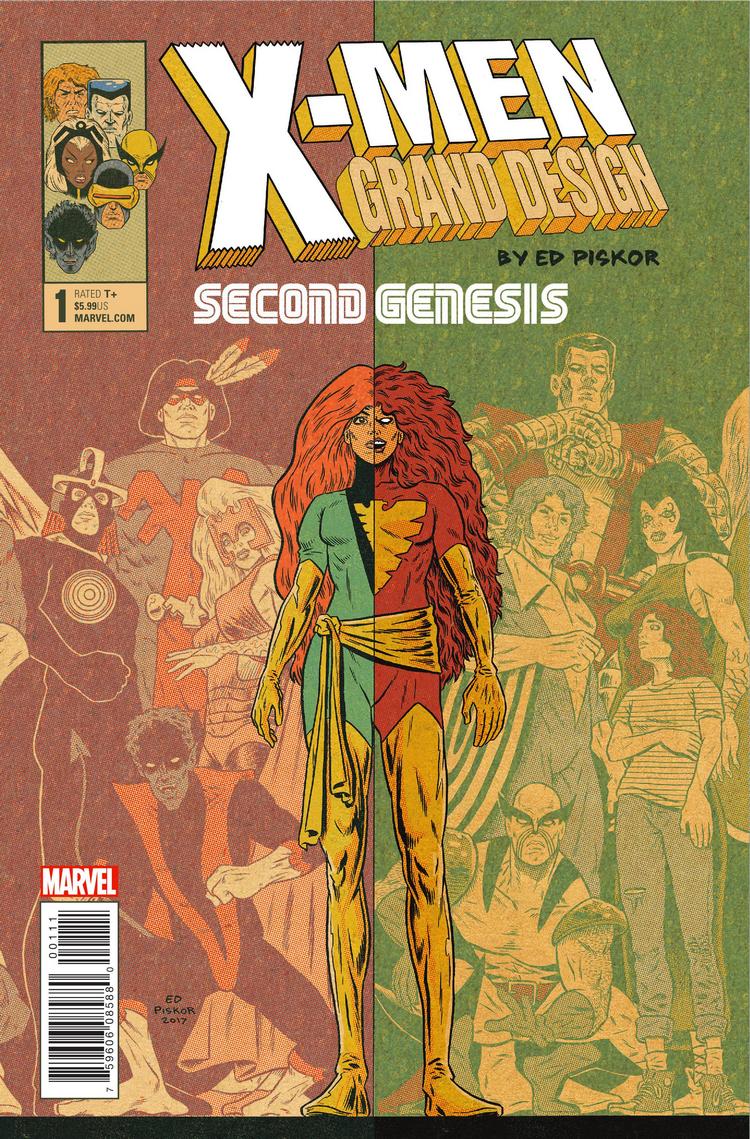 “Of course, trouble, for the X-Men, is often around the corner at a moment’s notice.”

The completion of X-Men: Grand Design – Second Genesis #1 marks the mid-point of the planned six-issue limited series in which cartoonist Ed Piskor has set out to retell the first 30 years of X-Men. This particular chapter picked up with the first relaunch, hence the subtitle. Although it might seem difficult to imagine how five years’ worth of X-Men storyline from Giant Size X-Men #1 (1975) to Uncanny X-Men #138 (1980) could fit into forty-one pages, Piskor manages it here. From the introduction of what was at the time the new X-Men team all the way through the Dark Phoenix Saga, it’s all here in a quick-paced sequence that demonstrates the truth of the line quoted above.

The writing and artwork are just as effective as in the previous chapters, with the grand scale of the X-Men universe on full display. The level of detail in each panel constantly impresses me; there’s a ton of storyline per page. One of the neat effects in the artwork is the use of bright white for certain panels, which makes them stand out on the yellowed paper. It’s a fun adaptation of the technique of using different color palettes for passages taking place outside normal space-time, modified for the paper on which this comic is printed. The number of characters and settings that have to be juggled for this comic don’t prevent it from being clear and understandable, which speaks to how well-planned it is.

When reading, it’s certainly noticeable which storylines get more page space compared to others; the most prominent examples of this disparity was a single moment getting a whole page and certain issues being summarized in one panel each. All things considered, I think the choices that were made make sense. Storylines that ended up affecting later stories understandably take up more time than the side adventures. As before, there are panels that are very recognizable reimaginings of iconic scenes, from Phoenix’s emergence from Jamaica Bay to Kitty Pryde arriving at the Xavier School. The story is familiar in a way that still feels new because it’s a different creator’s version of the story. There is something lost, but simultaneously something gained. There are certain moments that cannot replicate the feeling of reading the original, because the years of X-Men storylines that have passed necessarily affect how the story comes across. There are fewer surprises, as information revealed later is woven into the story from the start, but there is a sense of connection between the disparate parts that is appreciated and impressive. There are ways in which this book connects together storylines that were retconned together, making the whole tapestry seem somewhat more cohesive than it may have seemed as the original books were coming out. One story leads immediately to the next in ways that makes the story retroactively feel like one big narrative that was actually planned from the beginning.

Having greatly enjoyed the previous two issues, I had looking forward to this one as well. There was an additional reason for my anticipation as well, though: this was my first time reading a re-telling of an X-Men story after having read the issues on which it was based. I had wondered when starting this series whether it would serve as a good entry summary point for new fans or if it would be better for readers who are already fans. After reading this far, while I don’t think It’s necessary to have read the specific issues on which these stories are based before reading X-Men: Grand Design, familiarity with the characters most definitely helps. There are moments hinting at stories that fans are meant to already know of, and their meaning would be lost without at least a passing familiarity. This series that seems destined to become a classic in its own right once completed. There are fans who weren’t alive when X-Men first started; it’s fascinating to be around when the stories missed the first time around are being retold from this perspective decades later.

There have been recent announcements of an upcoming new X-Men storyline, and yet despite all that is happening in current continuity, the older stories are still worth revisiting – whether in their original form or through this retelling. Superhero comics often provide chances to read new stories about old characters and chances to see flashbacks of older scenes in a recent story. The chance to read a retelling of older beloved stories that rivals this series in breadth and depth is much more rare. It’s definitely an opportunity to take up by reading this book.