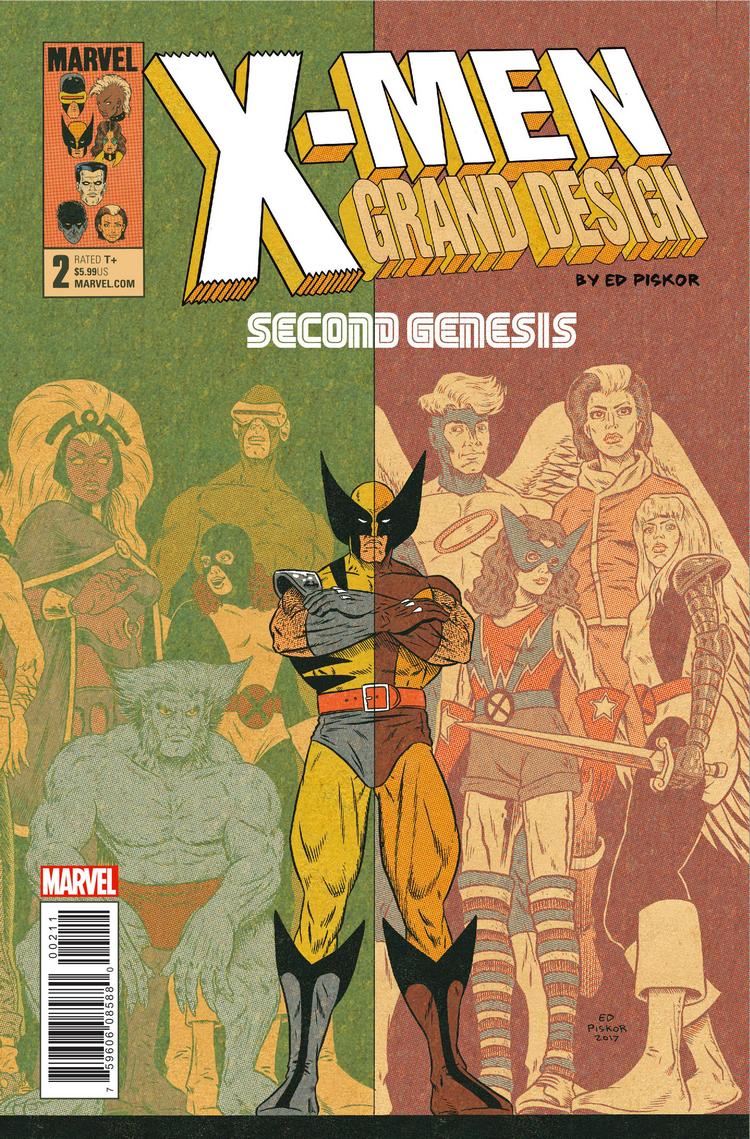 It should be common knowledge by this point that pleasant occasions don’t last long for the X-Men.

X-Men: Grand Design – Second Genesis #2 is the fourth issue of Ed Piskor’s six-issue comic that aims to retell the history of the X-Men from 1963 to 1992, covering about 280 issues plus some supplementary content. This particular issue, released last week, starts with the post-Dark Phoenix era of the X-Men and ends with the de-powering of Ororo Munroe (Storm).

Covering Uncanny X-Men #139 (1980) to Uncanny X-Men #186 (1984), condensed and retold in quick succession, the comics of this era introduced many changes to the X-Men’s status quo with stories that are perhaps known to many fans through adaptations. While reading this issue, which contains stories from some of the earlier X-Men comics I read, I was reminded of how I came to comics fandom via adaptations and how retellings can get fans interested in reading the originals.

Before I started reading X-Men comics, I was familiar with some of the characters and themes from this era but not familiar with the exact stories themselves. For instance, Rogue has been featured in cartoon and film series, but her story in those has been changed compared to the original. Additionally, the themes of “Days of Future Past” can be found in many X-Men stories, even those which do not have the specific plot of the two-issue story in Uncanny X-Men #141-#142. Personally, I’ll always think of the X-Men: Evolution’s Bayville High School principal whenever I hear the name “Senator Kelly”.

After seeing multiple retellings of the stories in this issue and more-recently reading the originals, reading this issue served as an interesting commentary on which part of X-Men canon have so influenced the way that X-Men are seen in popular culture by large percentage of superhero fans. This story is itself a retelling, but in the same medium as the original, bringing the stories back home in an interesting way.

Both the writing and artwork in this book continue to be amazing. There have been multiple times in this series where each page reads like a mini story in and of itself, focusing on a particular storyline or theme. Amid the choices that are made about which storylines to spend more time on, there is also the choice of how to make connections between disparate arcs.

In this era of X-Men (as in many others), there are multiple storylines happening at once; unlike the arcs in the previous issue of Grand Design, in which much of the content was leading up to the Phoenix and Dark Phoenix Sagas, the period of time covered in this issue introduces and continues many plot threads that sometimes weave together but are sometimes just part of individual stories. The ending has a plot thread leading to it, but there are also other plot threads that are left to follow. As such, connections have to be made that perhaps weren’t there, while those that actually were in the original are reinforced.

Rather than emphasizing the “Days of Future Past” timeline itself, this issue instead places the emphasis on the day of the Brotherhood of Evil Mutants’ attack and how that day comes to symbolize the first step toward further persecution of mutants. There’s a page that shows what the various X-Men were doing when the Brotherhood attacked, including a panel of Kitty Pryde and Steve Hunter watching television coverage of the attack. Resembling that panel with Kitty and Stevie, God Loves, Man Kills has a passage in which the X-Men are at Xavier’s School for Gifted Youngsters are watching a debate between Professor Charles Xavier and Reverend William Stryker regarding mutant rights.

That passage resonated with me after I read the graphic novel, and I think Second Genesis #2’s similarity to it effectively depicts the message of Days of Future Past even without the specific details. In the original two-issue story, X-Men are heading into the fray, as superheroes ready to fight the villains. In this version, they are watching these events unfold while they themselves are living their lives, afraid of what is going to come next. It’s a change that in some ways brings these super-powered characters down to Earth.

It brings to mind the feeling of remembering where you were when something life-changing or world-changing happened. It resonates because real people affected by such persecution cannot see into the future and don’t have superpowers. The everyday fear ends up hitting home in a way that’s just as effective the shock of seeing a horrible future timeline, because that horrible future timeline is doubtless being imagined and dreaded as a possibility by these characters, even if its not shown explicitly on the page.

In terms of the writing, as the story has continued, Uatu the Watcher’s narration has changed in style. Throughout, certain passages read as grand declarations while others read as regular narration that would be seen in any comic book. The earlier parts of the story included a lot more declarations than the currently storyline. I think this might be because the previous arc included retconned information inserted into Silver-Age X-Men, making that part read more like legend.

One amusing point in this latest issue was seeing how, despite having an almost-omniscient narrator, a story can still use the limitations of the narrator’s knowledge as a story-telling device. In this case, the certain passage where this happens provides a way for the story to skip a certain very convoluted side series, but it also provides a way for the narrator to not know any more than what the main characters and fans knew at the time of the story’s release. There’s been a combination of both techniques (sometimes revealing plot points earlier than readers knew them at the time, while keeping other plot points a mystery to be revealed later) used in this series.

In terms of the artwork, Piskor has a talent for distilling storylines and issues into panels that best portray the overall feel of their respective stories. There are moments in this issue that summarize memorable scenes between: Rogue’s decision to join the X-Men; the X-Men and the Morlocks; Scott Summers and Madelyn Prior; and the X-Men and the Brood. There’s a good mix of big moments as well as small moments that show the essence of characters’ personalities.

Despite little moments of confusion, everything fits together in a way that makes it seem like prior events lead inescapably to subsequent ones, including callbacks to the previous arc (made possible due to looking at these stories in hindsight). Some of these callbacks are to minor moments in the previous arc, only noticeable upon going back through the story. It makes me wonder at the great deal of planning that must have gone into this book.

A point of note is that this series has finally reached storylines centering on fan-favorite characters such as Kitty Pryde and Rogue, who were new members of the team at the time, while further continuing and developing the storylines of characters like Ororo Munroe. These three are among my favorite characters, so this fact made the book even more enjoyable. The series also shows the connection between the X-Men and Carol Danvers, who is only with the team for a short but memorable while, a story I was only passingly aware of until recently.

While characters who were mostly in other X-books, such as the New Mutants, do show up in this story, they do play a peripheral role; it’s just as well, because retelling the entire stories of the many other X-books that were being published during this time would require more pages than this series has been allotted or even other miniseries entirely.

Kitty’s enthusiastic attempted at becoming a full-fledged X-Man as well as Rogue’s attempts at gaining the trust of the other members of the team are some of my favorite storylines. Storm’s development, as she transforms both internal and externally, is shown as well. The book ends with a pivotal moment in Storm’s storyline, which is more of a cliffhanger than the ending of the previous arc, or even the ending of the previous issue.

There are a number of moments in X-Men history during this era that could have been chosen as the ending; I think based on this ending and based on the cover of the next issue that Ororo’s further development will be a main theme. For fans who’ve read the originals, this is a fun revisiting of these characters origins and memorable moments; for fans who know these characters mostly though the adaptations, this is an informative and enjoyable summary to become more familiar with the source material that inspired their favorite stories.

The Second Genesis arc of X-Men: Grand Design shows how what was once new has become classic. I’ve been a fan of the X-Men for a long time, and one of the things I think of is how this series is most well-known for stories from this era. In other words, it’s a series known for its reinventions and sequels. These past two issues of X-Men: Grand Design have retold an era that many comics fans associate with introducing characters and themes that they most associate with the X-Men. Many of these storylines and themes are also the basis of several adaptations of the series, some of which have read fans to go back and look for the comic on which they were based.

This arc was a reminder of how changes introduced in a series can become beloved and reimagined in so many different ways. It’s a relevant message to remember as we discuss the future of these superhero multiverses and the potential for changes going forward. What’s new to us will likely become the next generation of fans’ source material for their imaginations, just as what was new to fans in the 1980s has become the source material for ours. It shows as well how the details may change, but the theme at the heart can endure.