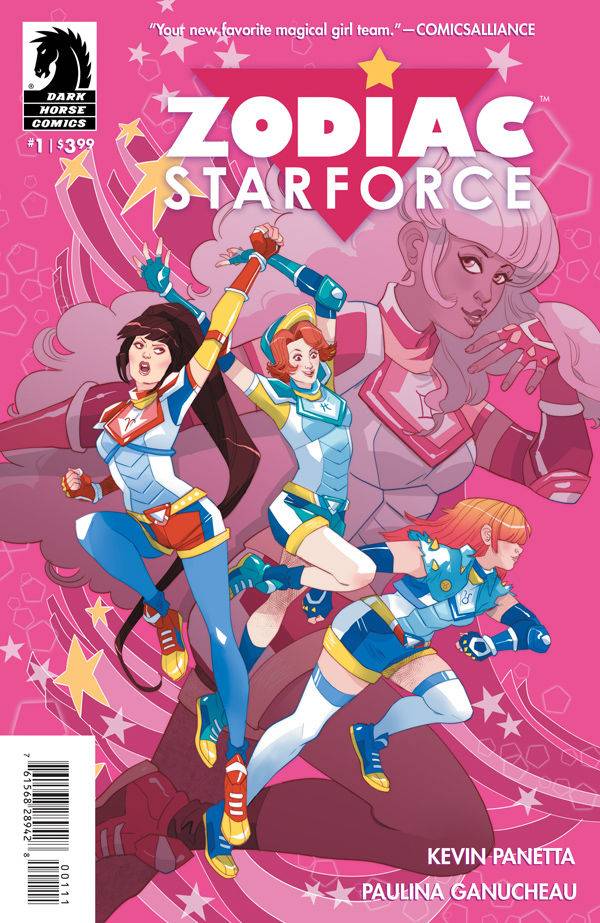 Wow, Zodiac Starforce, you have my attention. I wasn’t sure what to expect of this new comic by Kevin Panetta, who has written short stories for the Bravest Warriors comic books, but now I’m itching to see more. So, what’s it all about?

We’ve got a magical girl team with astrological codenames, (and no one is over the age of 16, which I love) who got their powers from a Goddess called Astra. Prior to the story’s beginning, they defeated the villain Cimmeria (or so they thought) and returned to their normal, high school lives. So instead of this being a typical origin story of a team getting together, it picks them up two years after they won the battle. The team has lost its way, and the characters are trying to become the people they will be as adults, which basically means they’re experiencing the extreme highs and lows of high school.

This issue certainly starts off with a bang – Emma has fallen asleep when she’s supposed to be studying for a Biology test, and a huge grizzly monster appears! We get the feeling that the world has been relatively peaceful up to this point, that no one has needed the girls’ protective services. Paulina Ganucheau’s character design of the monster is brilliant; she uses deep shades of blue that beautifully compliment the soft pinks, creams and yellows that have dominated the pages up until that point. The monster haphazardly stomps through the school like the Hulk, and Emma has no option but to risk her life and escape through unconventional means.

The looming threat causes Emma’s friend Kim to seriously consider getting the team back together, which seems like a great opportunity to build back their friendships, too. As the girls debate what they think the monster means, and if the evil Cimmeria has returned, I feel their tension and I’m rooting for them. And I love that a lot of this conversation takes place at a house party, it grounds the series in reality. They are just regular 16 year old girls, but tasked with extra responsibilities.

Another aspect that I really enjoyed in this issue were the references to the horror genre; its characters and creepy situations. Those moments felt very refreshing, and came with an appropriate amount of humor. They helped to further draw us in to the pressing situation, and also the events of the house party.

The issue takes a glorious turn when Emma faints, and we’re thrown into a wash of her unconscious. It has a magical, dreamlike quality that remains consistent to the color palette of the issue, but adds depth of character and building tension. It was one of my favorite moments, and when Emma was snapped awake by her friends, I was right back in high school reliving a party.

As the issue came to a close, I felt completely on board with these characters and their friendship circle, which, like all high school friendships, comes with a healthy dose of drama. I’m invested in their goal to contact Astra and investigate what the hell is going on, and I know their adventures are going to be treacherous. If you’re a fan of Gotham Academy, Giant Days, or The Runaways, I strongly recommend checking out this book. It was a pleasure to read, and I eagerly await the second issue.