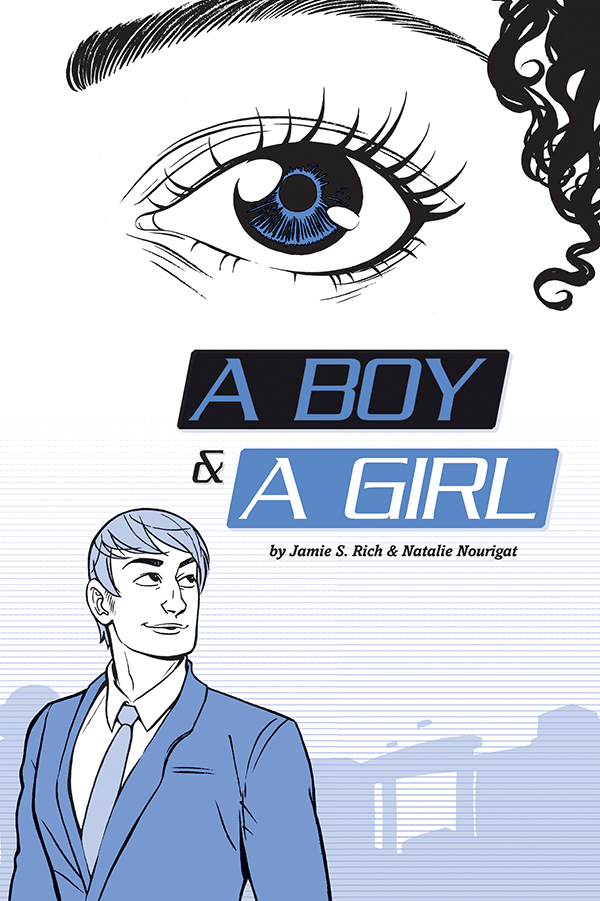 Oni Press has released information about Jamie S. Rich and Natalie Nourigat’s A Boy And A Girl, in stores December 11, 2013. 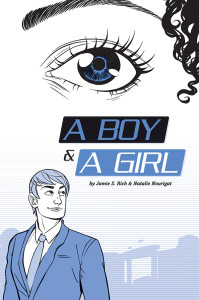 Portland, OR (October 29, 2013) – December 11, Oni Press is proud to be releasing the full-length graphic novel A Boy and a Girl, a collaboration between writer Jamie S. Rich (12 Reasons Why I Love Her) and Natalie Nourigat (Between Gears). A romance set in a not-to-distant future, A Boy and a Girl is a story about what it means to be human, fall in love, and all the inherent complications that arise from both.

“The comic was a true collaboration in that we built the story together,” Nourigat explained. “Jamie asked me what kind of stuff I wanted to draw, and what kind of characters I’d like to tell a story about, and we basically went from there.”

The story that emerged was one of Travis and Charley, two people in their early twenties trying to survive in a world where robot servants and flying cars are commonplace. The wealthy live in ever-taller skyscrapers, and the common citizens go about their days far below.

“That post-collegiate coming-of-age feeling of not being sure you’ve chosen the right path is fairly universal,” Rich said, “and it doesn’t necessarily go away, even as you get older. Natalie and I were both sick of slacker characters, young people being shown as not doing anything because they have no ambition. We thought it would be far more interesting to show characters who really want to do something and are on the cusp of life, even if they aren’t sure what is going to happen next.”

Thus, Travis was cast as a college student whose major in “digital ethics” is leaving him a degree with very little practical application, whereas Charley has signed up for a government program that will soon send her to parts unknown. They meet on what is essentially her last 24 hours in town, and they are determined to make the most of it.

“It was important to both of us that Charley be a confident, self-assured woman,” Natalie said, “and that she not be the antidote to Travis’ confusion. They share a common goal, when it all comes down to it. Which is probably why they fall in love with each other. And why they can have fun together. First and foremost, A Boy and a Girl is a fun comic book. We wanted you to read it and have a good time, the rest is just bonus content.”

Advance praise for the book has been strong. SF Weekly included it in their fall graphic novel round-up with books by the likes of Art Spiegelman and Jim Steranko, calling A Boy and a Girl “a completely disarming take on the world’s oldest storytelling trope.”

David Lafuente, an artist on the Ultimate Spider-Man comics and the upcoming adaptation of Neil Gaiman’s The Graveyard Book: “Jamie and Natalie enter the sci-fi realm to tell a love story full of secrets that echoes Michael Winterbottom. Charming characters, tight plot and beautiful lines. A fantastic book, I couldn’t put it down.”

Ben Acker, co-creator of Thrilling Adventure Hour: “A Boy and a Girl is a wonderful sci-fi romantic comedy, but not necessarily in that order. If you like people and/or things, this is the book for you.”

And Michael Allred, creator of Madman and currently the co-writer and artist on FF for Marvel Comics: “I’ve been a huge fan of Jamie S. Rich’s writing since day one and am always crazy excited to see each new project. That excitement is multiplied as he joins Natalie Nourigat’s exploding artistic talents on A Boy and a Girl. This book is a beaut’! Incredibly clever and charming, it gets my highest recommendation!”

A Boy and a Girl has 160 pages of story and art, printed in black-and-white with a special blue ink for tones, and it retails for $19.99.