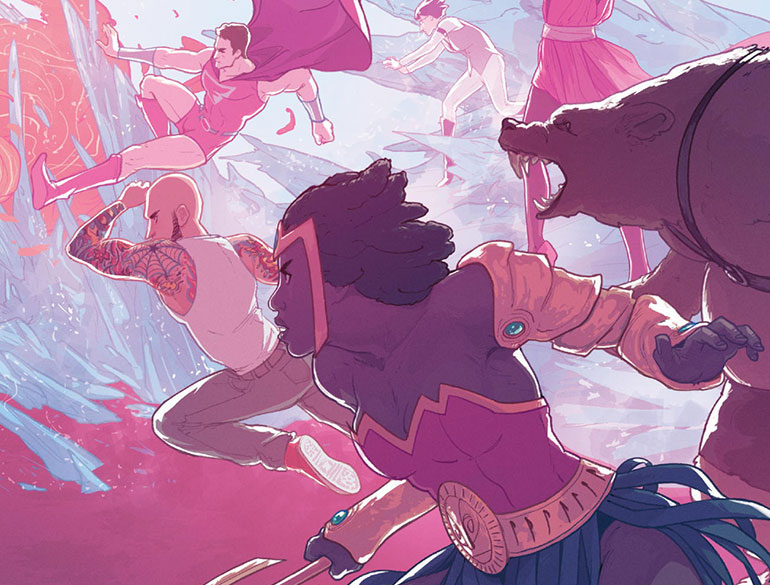 When he was 13, Joe Glass was a “massive X-Men fan,” and while there is said to be an obvious analogy made between the plight of mutants and queer people, he didn’t see any at that time.

The writer later learned there were queer characters in comics, but they were either rarely appearing side characters, or their identities were “masked so strongly that, without understanding the cues and codes setup to communicate that someone was queer,” they passed him by.

Today, the landscape has evolved, with no small thanks to Joe himself. The writer’s queer superhero team, The Pride, is seeing its big omnibus release from Dark Horse Comics today, and, as Glass explains, The Pride came out of his own desire to see queer people like himself in comics. 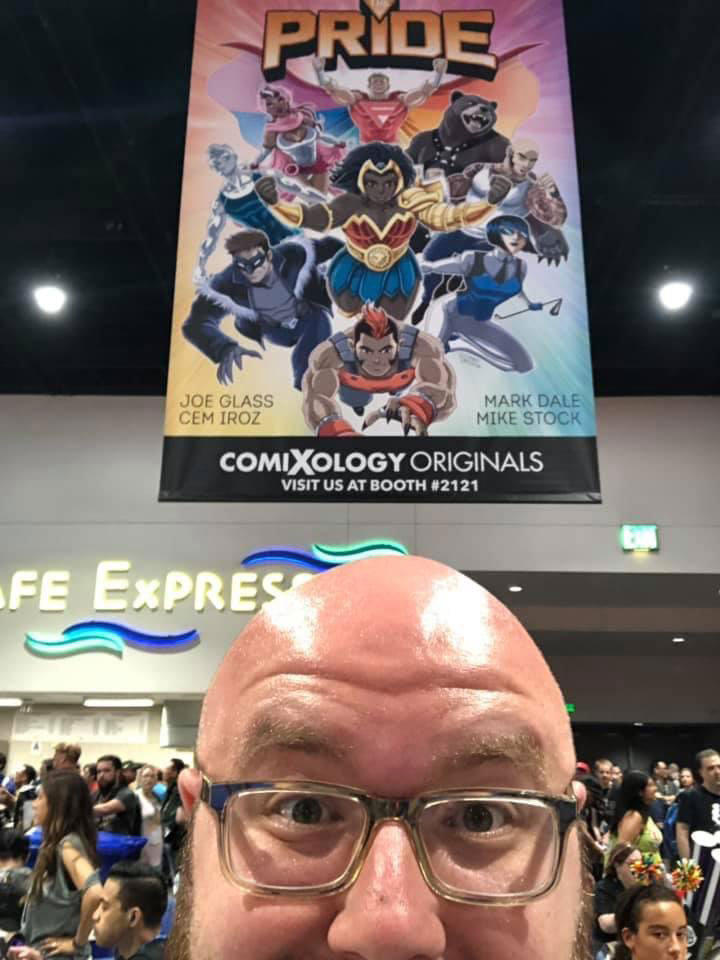 He started working on the initial concept for The Pride when he was 15, and it took 10 years for him to publish the first issue. Glass says some of the delay came from “not being sure that anyone wanted this besides me.” Then, he worked with Drew Davis and PJ Montgomery on the comic Stiffs, and they read one of his scripts for The Pride and encouraged him to go forward with making it into a comic.

Glass describes entering the comic industry with Davis, Montgomery, and artist Gavin Mitchell as being “like bulls in a China shop.” They group worked together on Stiffs while Mitchell was still in university, and after they encouraged Joe to work on The Pride, the group thought, “yeah, Gavin can work on two comics while going through university.” Glass notes, “that didn’t quite pan out,” but the group learned from its mistakes and these creators were successful at self-publishing both Stiffs and early editions of The Pride. 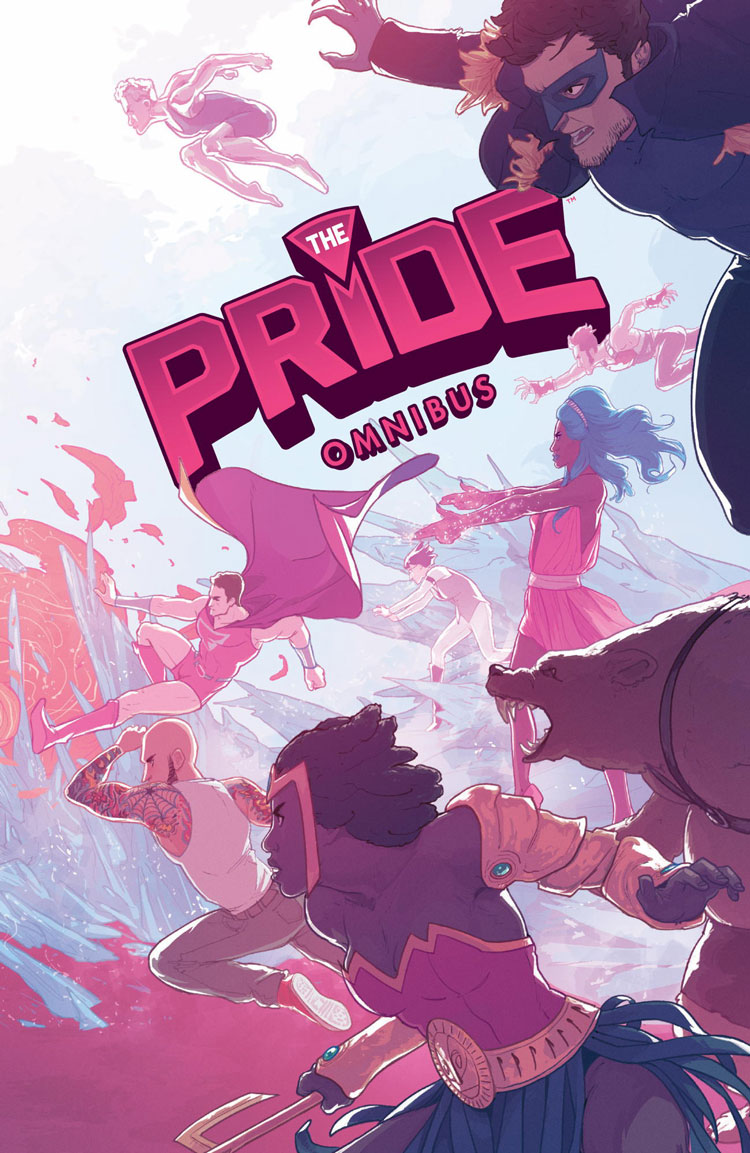 Despite initial concerns that there wouldn’t be interest, The Pride did well. At Glass’s first show where he had copies of The Pride, he says, “The number of people’s faces that lit up when I mentioned ‘queer superhero’ made me start thinking that this might be something people were interested in.”

Because of the self-published nature of The Pride, and Mitchell’s other work, Joe needed to find artists for the series. He reached out to other creators he had met at comic conventions or online, at a time when Project Rooftop was updating regularly and Tumblr was at its height, “and not the pile of rubbish where it is these days… To be honest, that’s how I got artists who would now become big Marvel and DC names, like Kris Anka… it was literally just messaging someone out of the blue” and asking if people would come onboard in some way, even if it was just for a cover. 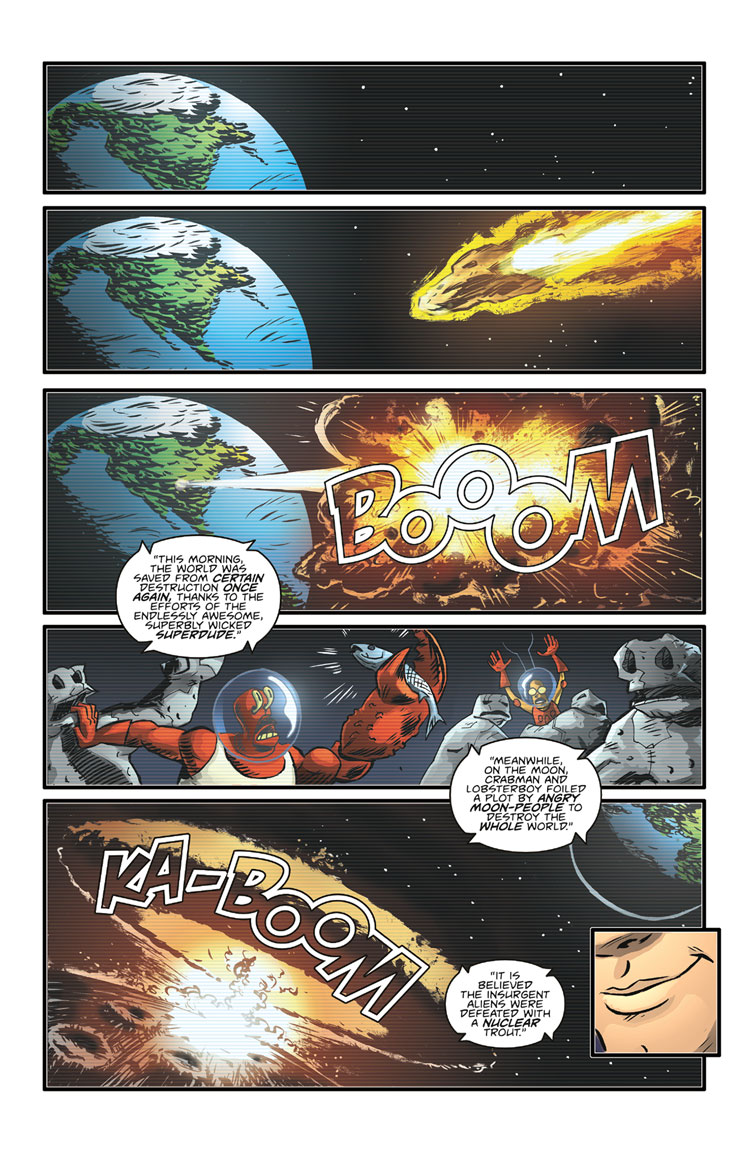 The Pride was initially only released as a physical series, sold at conventions or via on online store.  In 2013, that changed when the online comics platform ComiXology announced  ComiXology Submits, which allowed independent, self-published creators onto the platform. Glass says ComiXology was immediately supportive of The Pride and even asked him to be on a panel at San Diego Comic-Con International, to talk about the series and the Submits initiative. The Pride was later included in a bundle of ComiXology Submit titles, and from there, “reach seemed to skyrocket.” 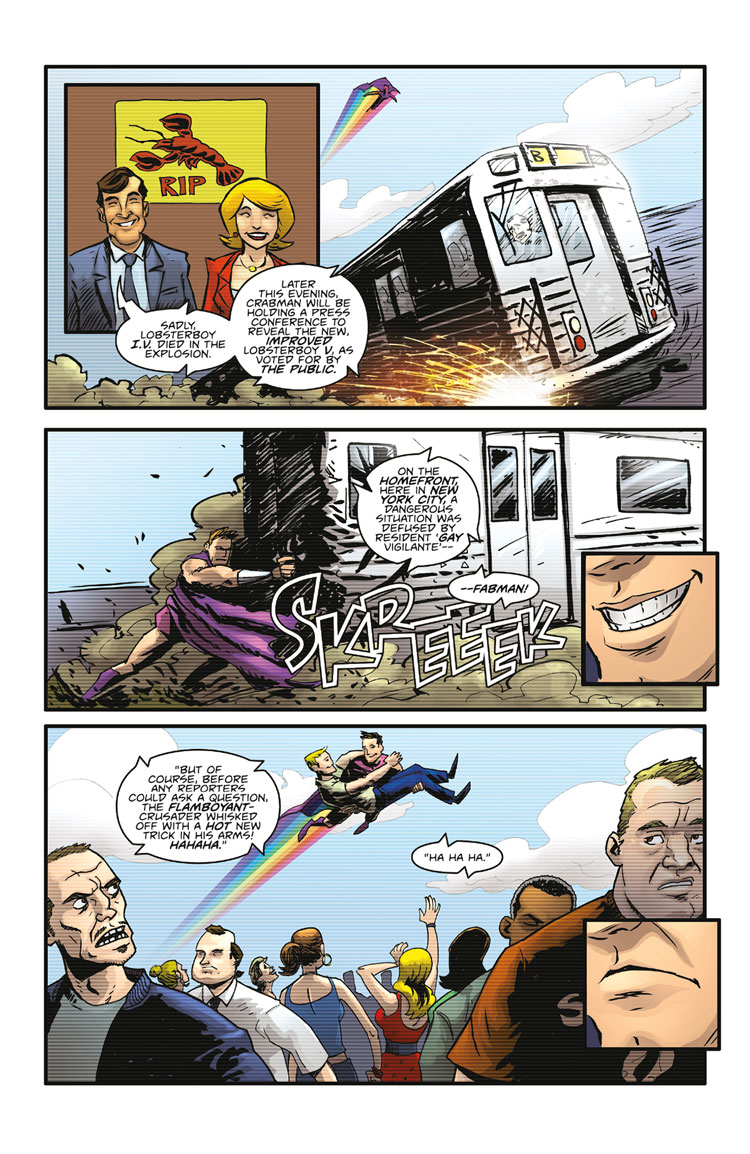 After the work launched on ComiXology, The Pride began to outsell Joe’s other comic, Stiffs, for the first time. Glass began placing rainbow flags at his convention booths to mark it as a safe space and give fans “a little element of calm in this  crowded room” in artist alley. Glass says people would come to his booth and discuss coming out in school, or parents would pick up the book for their kids who had just come out. 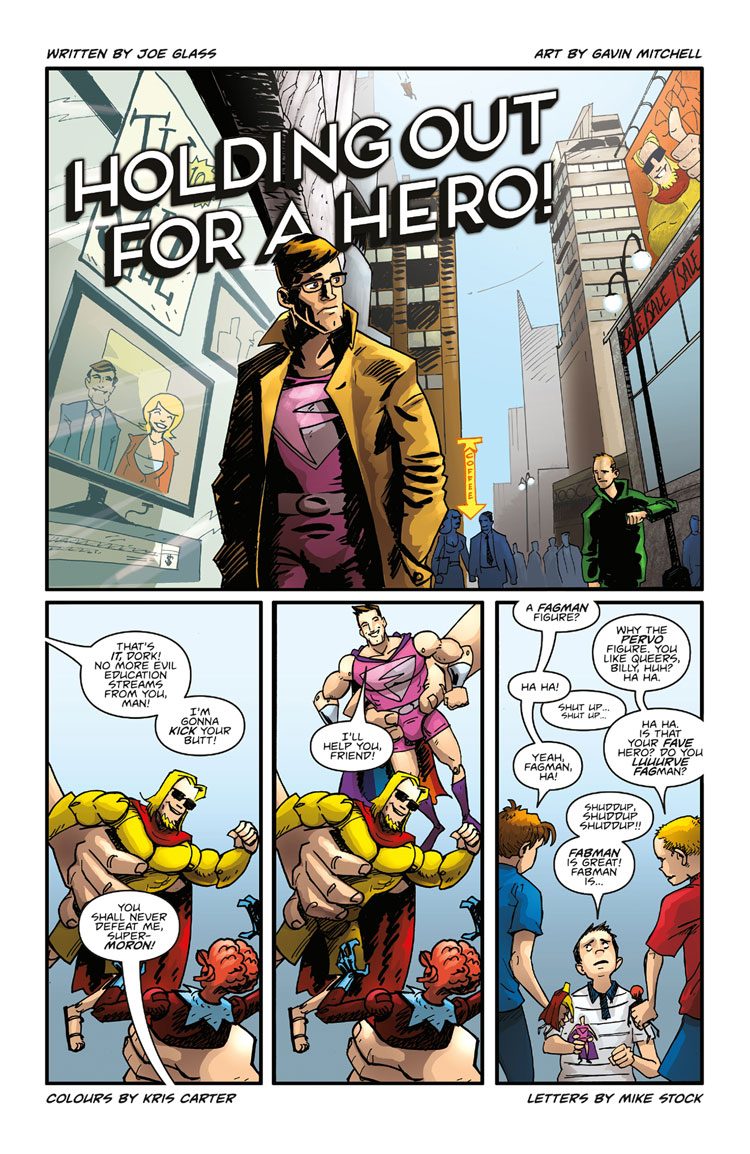 One of the problems in mainstream comics, Glass says, is often that diverse characters aren’t backed by diverse creative teams. He says, “If you’re going to have representation, diversity, or show [marginalized] communities, you need to involve them… if you’re doing it without their involvement, you’re probably not going to get it right. You’re just an ally, putting your voice over theirs.” 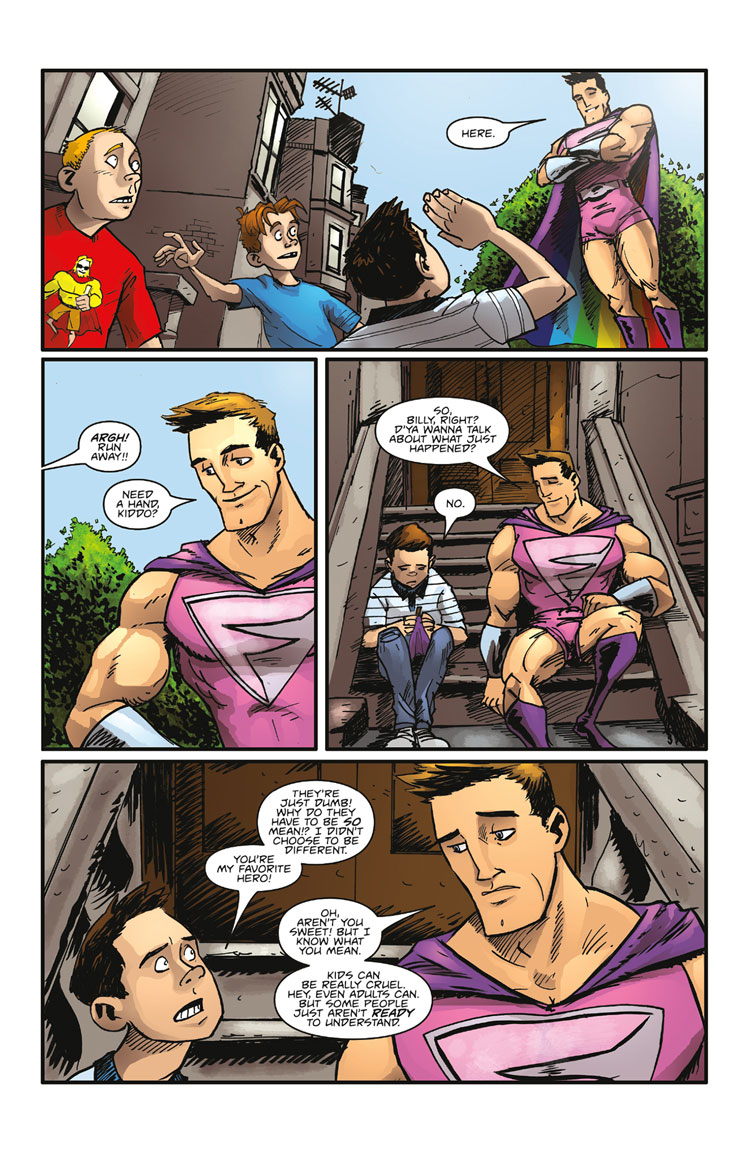 He connects this to a larger problem in comics: Often, editors will dismiss a comic with a minority lead for not selling as well as a tentpole comic with multiple media tie-ins. Glass says, “You have to understand that, when you have that kind of title… there are elements out there who will automatically [ignore the title if it has a diverse lead], and if you’re not bearing that in mind when calculating sales figures, you’re not helping.” 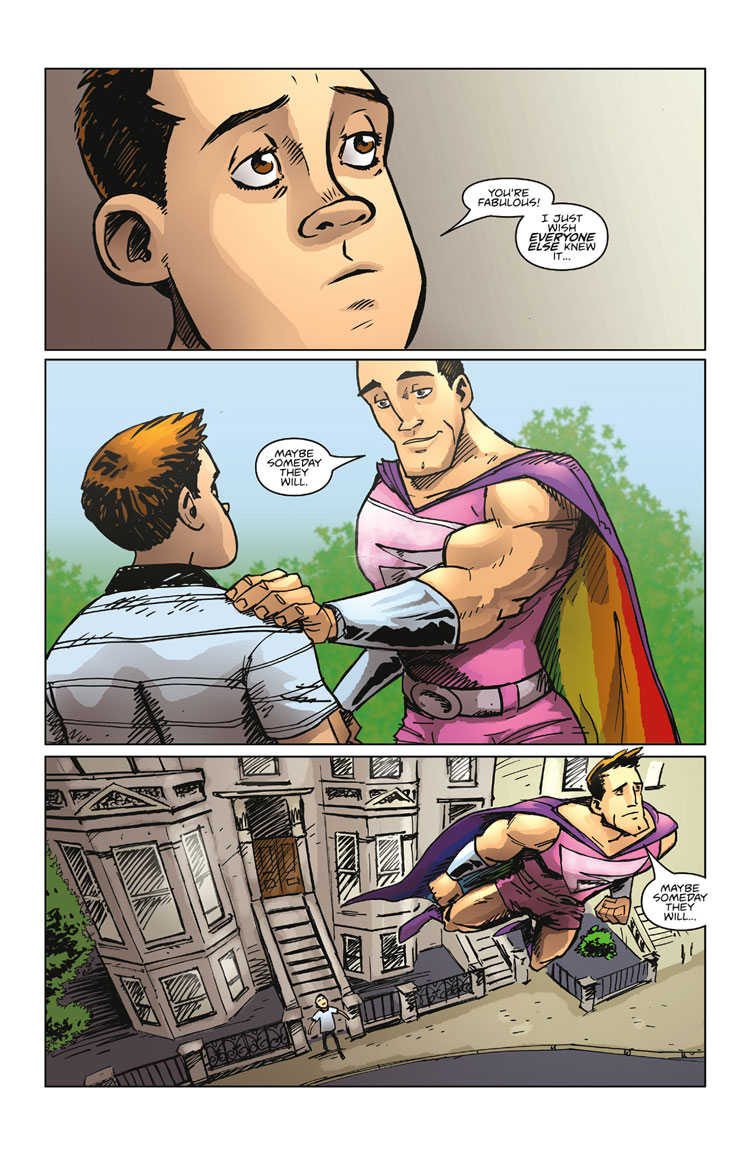 To that end, Glass says he tried to make The Pride accessible to a wide array of audiences by taking “what was categorized perhaps as a queer issue, and relaying it as a human issue.” He explains, “Just because [something] is considered an LGBTQ issue doesn’t mean that only LGBTQ people are going to understand it.” This allows readers of all kinds to extend empathy to the story’s characters and relate in some way.

Glass has also been approached by queer people whose first exposure to comics is The Pride. Unlike cinema, Glass explains, comics often have barriers to new readers, to the point that even if a long-running comic does introduce new, diverse characters, interested readers may not know where or how to start with the series. 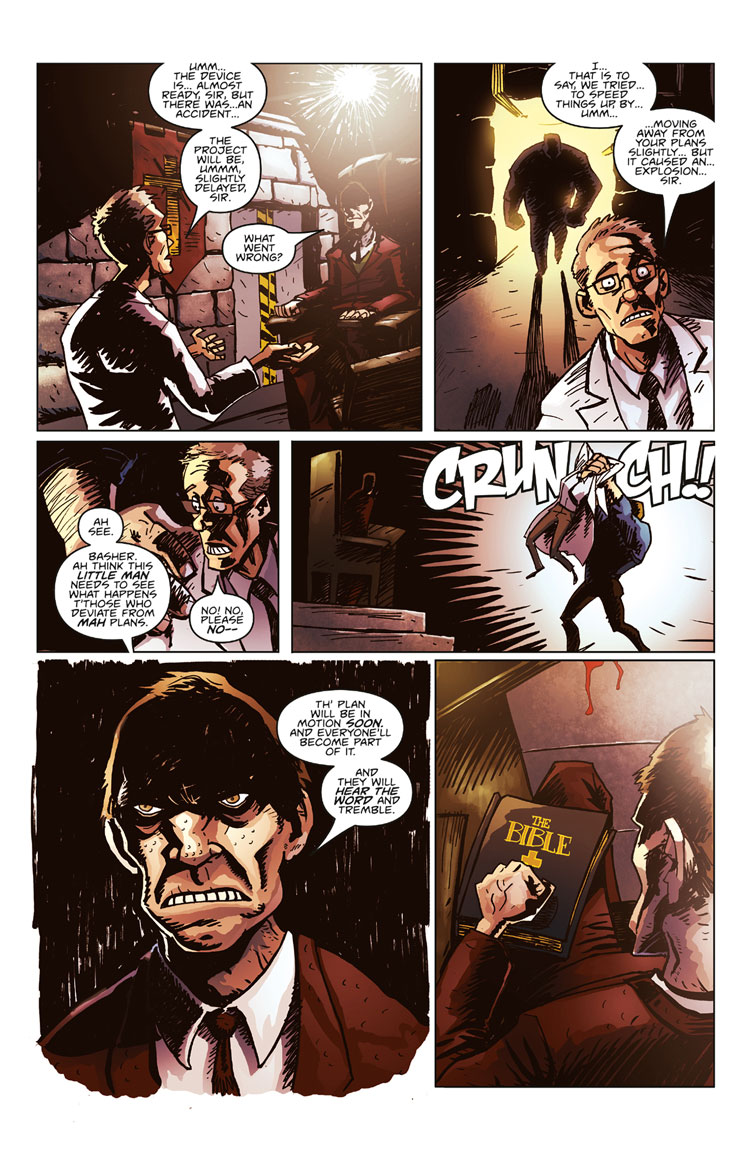 Surprisingly, much of the pushback against the book has also come from queer people. Fabman, the founding hero of The Pride, is a campy gay man whose superhero costume is pink with a rainbow cape. Glass describes him as “so much fun to write, because there’s so much about him that I immediately relate to.” However, Glass says a lot of people in the LGBTQ community don’t like him, “because he’s wearing a pink superhero costume and he wears a rainbow flag and he’s flamboyantly and loudly gay… He’s got a bit of a habit for sleeping around.” 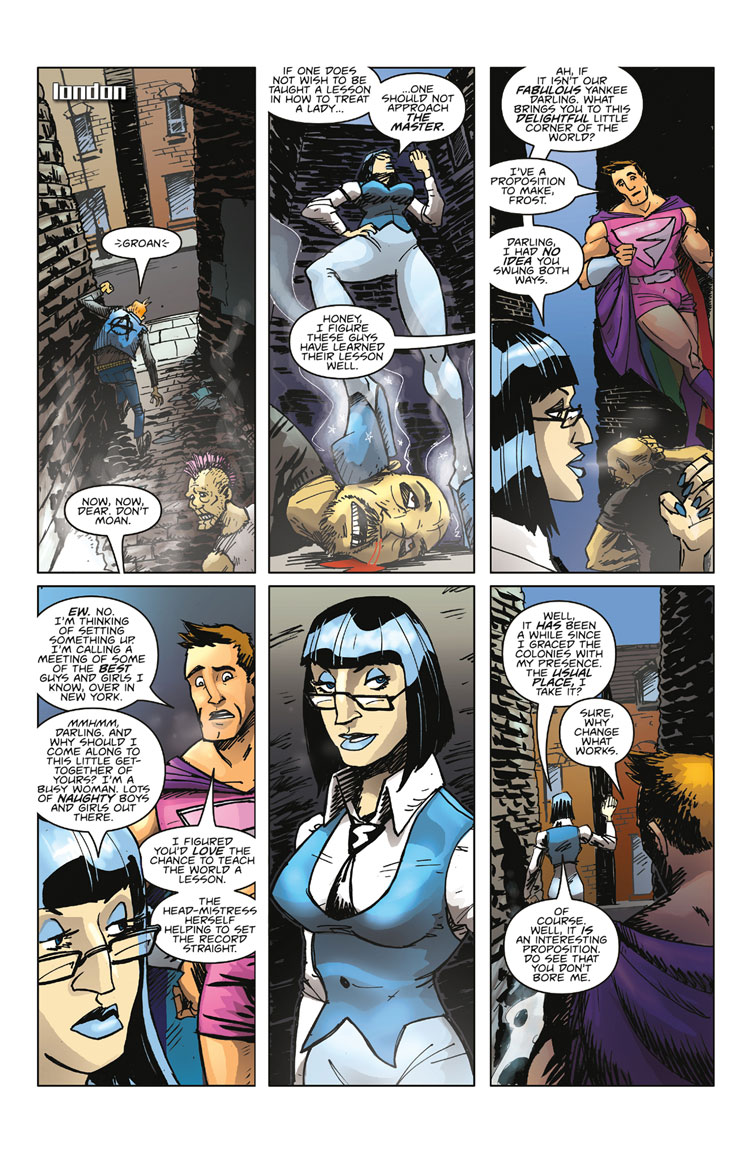 According to some readers, Fabman embodies negative stereotypes about gay men. Glass argues that stereotypes aren’t inherently negative. “I know tons of gay guys like that. I’m one of them,” he says. “We have the right to be heard and see ourselves in our entertainment as much as a less flamboyant and more masculine acting or monogamous queer character.”

“It certainly made me realize and reflect on my own coming out,” he continues. “When I was first coming out, and all my friends were straight and everyone around me was straight, I would say ‘I’m gay but I’m not one of those gays.’ I would try to lessen my campiness and I would try to act differently, I’d wear all black, and I would do everything I could to not be loud.” 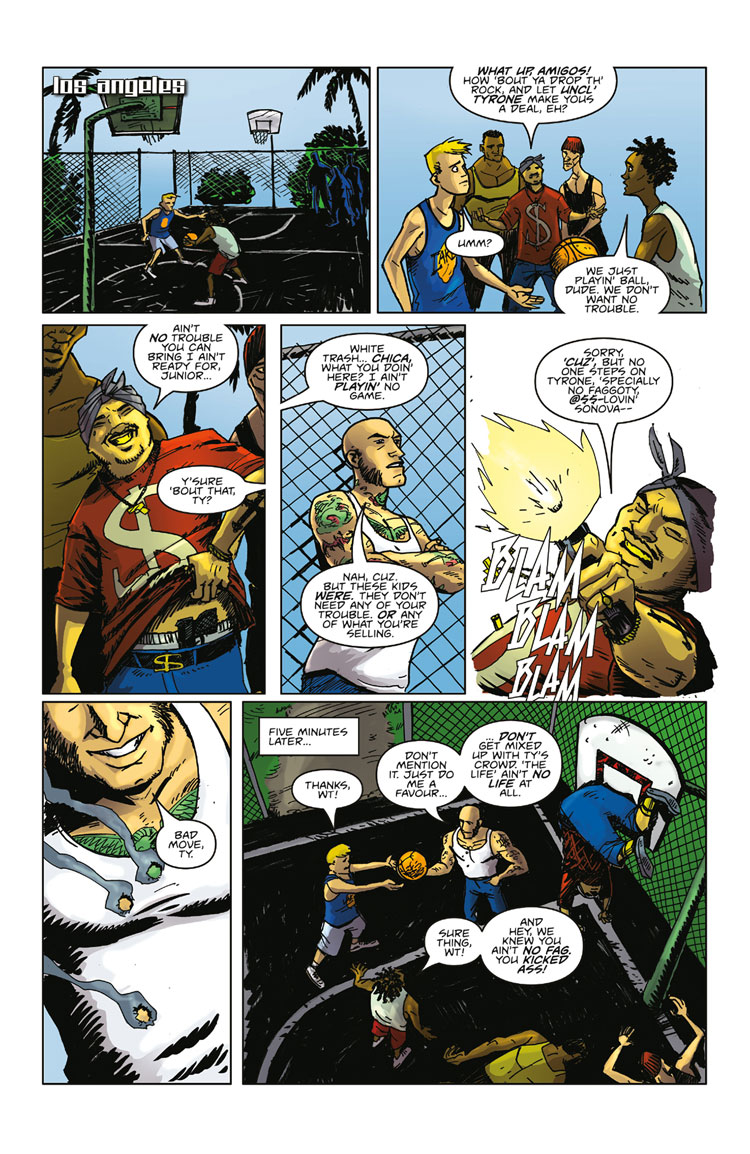 For many queer people, this will sound painfully familiar. ‘Covering’ is the term often used here – hiding aspects of your identity to appear more palatable to others. It’s not a fun feeling.

Glass explains, “It got to the point of realizing that I was out of the closet, but I was still holding a wall around myself and still not being honest about who I was as a person.” He says people who see him at comic cons now, covered in glitter, would never imagine what he used to be like.

“We have this kind of animosity toward the idea of a camp gay man, or flamboyant gay men, or all the stereotype ideas of gay men who sleep around and don’t necessarily follow heterosexual notions of what a relationship is. And I find that so odd because… look at a character like Tony Stark. If [Fabman] was a straight character who slept around, they’d laud it as a machismo super awesome dude, but if you have a gay character do it, they’re a stereotype.” Glass wonders, “Why are [they] so determined to make a gay guy shut up? And the fact that it comes from within our community just feels like something we have to continue to explore and discuss. Because it’s something that continues to harm us.” 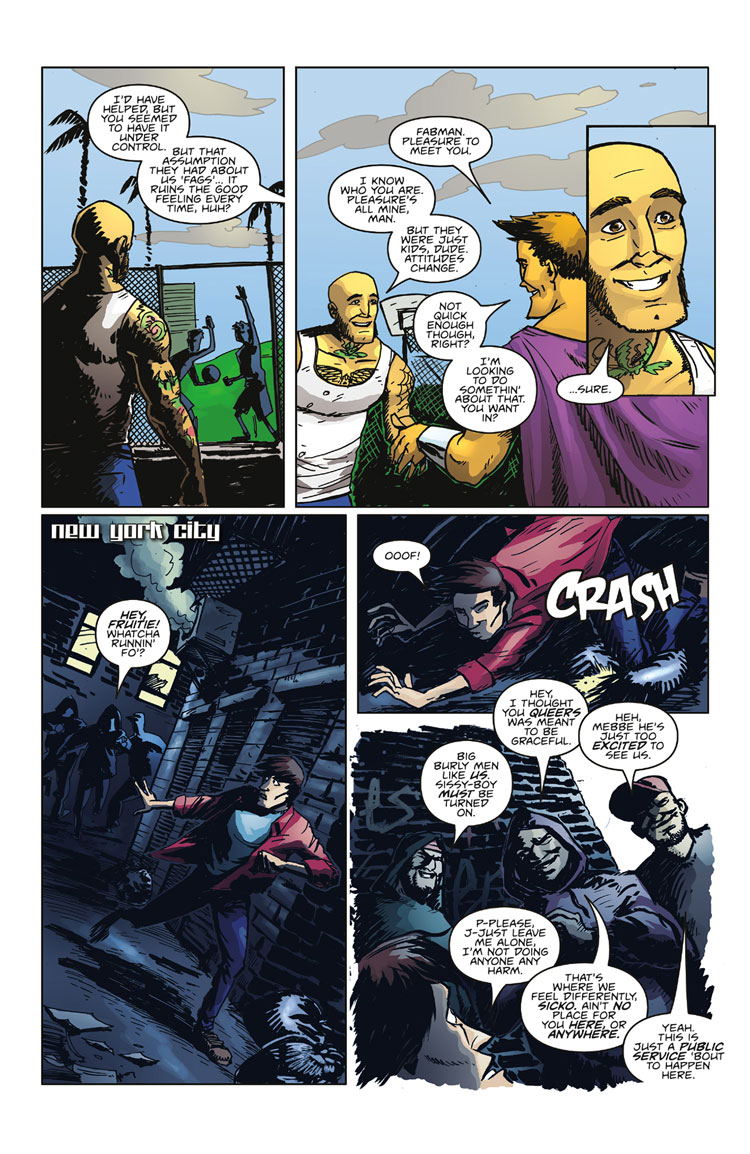 The idea that queer creators need to moderate their stories to satisfy some abstract idea of “good representation” is unfortunately neither new, nor getting better. Aevee Bee’s 2016 piece “Against Representation” captured this well: “The marginalized who take risks in representing themselves must be taken seriously even when we do not agree, because the opinion of one of our own we disagree with is worth infinitely more than the bland asset of someone with no skin in the game.”

Some people haven’t gotten the memo. Glass says the push for more representation in media has put so much emphasis on positive representation that it has limited how queer people can depict themselves, almost turning into a modern version of the old Hays Codes. “It’s very bizarre to me, this idea that if we to have good queer representation, it has to be only a certain kind of queer. It has to always be a superhero, or a positive protagonist, or they can’t ever die. They can’t ever have anything awful to happen to them. They can’t ever be sad. I’m just like, no, that’s not true… we should have queer stories which are broader.” 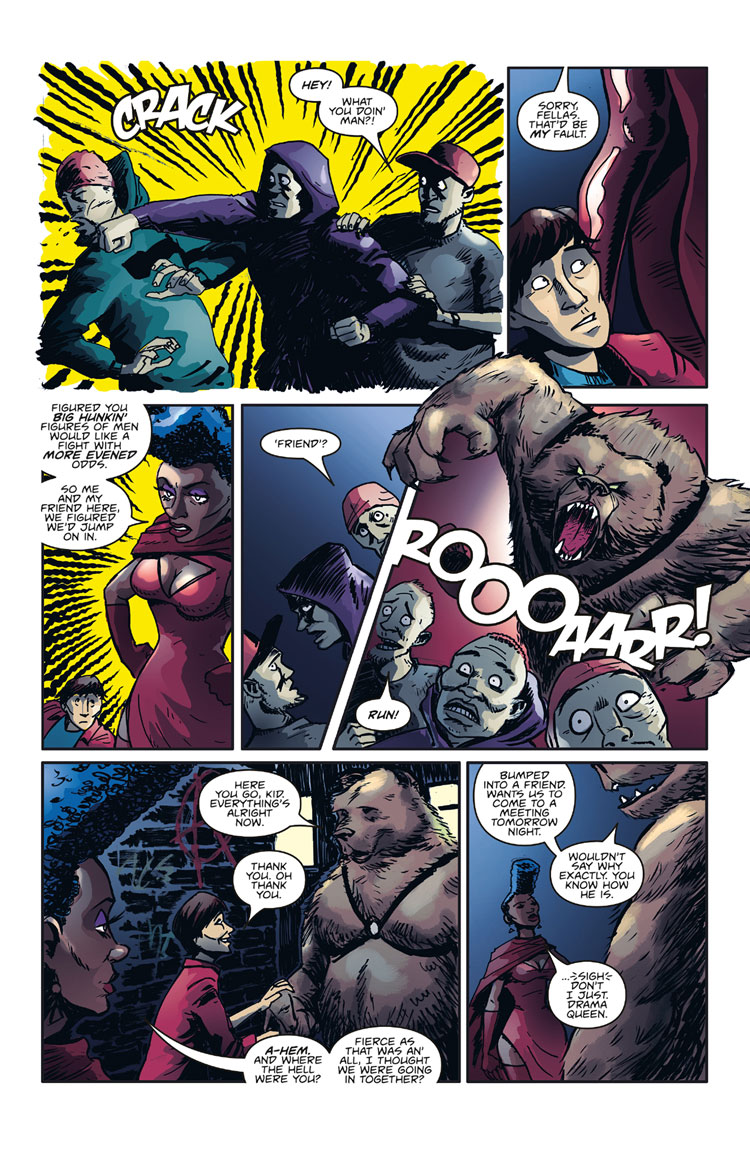 Glass is obviously excited to continue The Pride. He says he likes the idea of other stories being able to exist in the same universe, and he wants to continue to expand inclusivity in the series, with “not just other aspects of the LGBTQ spectrum but also other aspects of identity. Minorities who maybe don’t get to regularly see themselves.”

Fans who re-read The Pride omnibus might want to pay closer attention to Morningstar, who has been a background character for the first two seasons as a member of the superhero team Justice Division. Glass hopes to build him up in future installments. 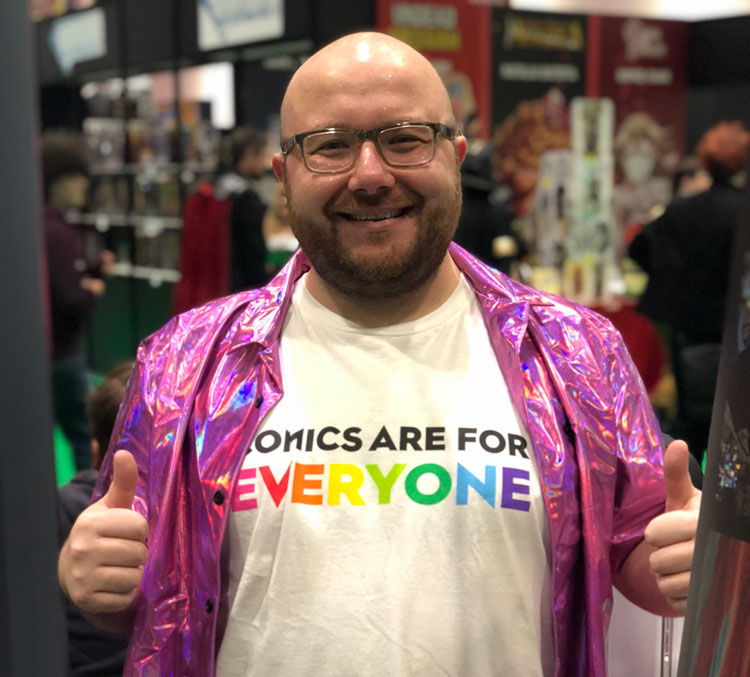 As for new fans, Glass hopes more people will discover the series from the new Dark Horse release. This will be the first time The Pride is available in bookstores, and he’s hoping “it will find a lot more readers and particularly young, queer readers who felt that maybe superheroes weren’t for them… and they’ll find something which feels made for them. Because that’s what The Pride is; it’s made for the LGBTQ community and LGBTQ fans, wherever they are.”