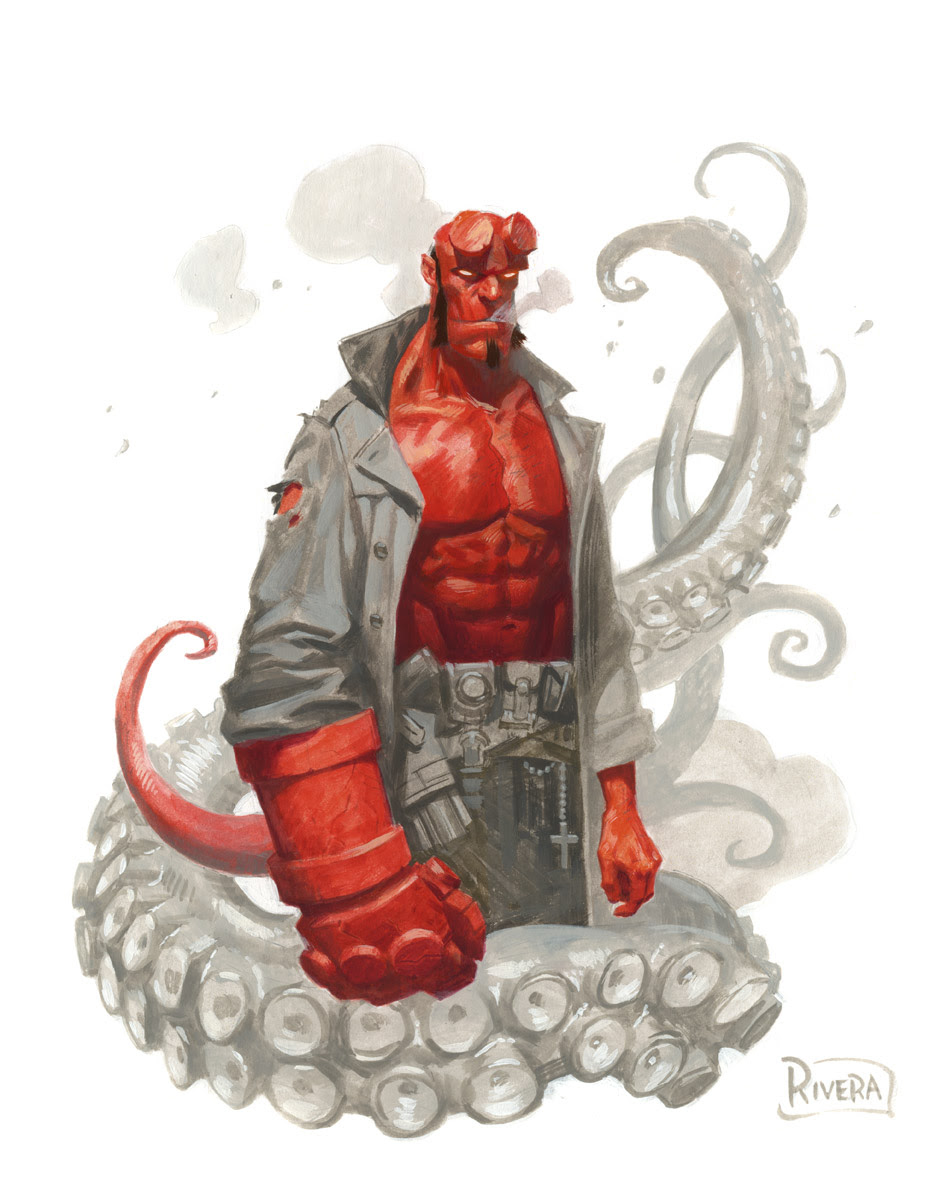 (July 7, 2015) And you thought the fireworks ended on the Fourth of July? In advance of San Diego Comic Con 2015, Dark Horse Comics revealed today a series of major announcements for the strange, shared Mignolaverse of comic books and graphic novels comprised of Hellboy, Abe Sapien, BPRD, Frankenstein Underground, Lobster Johnson and Witchfinder. In a year in which a new dinosaur has been named after Mike Mignola’s most famous creation and Dark Horse Comics has teased that “the impossible will happen” in the Mignolaverse, today’s news brings still more surprises: a new series, a new one-shot special,  new high profile collaborators and the departure of a longtime writer.

“I’m excited,” said Mike Mignola. “I’m always excited to work with Ben Stenbeck and it’s great to finally see his take on Hellboy. And I’m excited about working with Chris Roberson–He’s bringing a wonderful new energy and a lot of new ideas to Hellboy AND THE BPRD (and a couple other books we aren’t ready to talk about yet). And I’m excited about the amazing way John Arcudi is wrapping up BPRD HELL ON EARTH. Of course we are all sorry to see him leave the title but he is doing such an amazing job on his way out. I will be forever in his debt–He is really responsible for making the BPRD what it is and while I’m excited about where that book is going (can’t say anything about that yet) everything we do in the future will be built on top of the rock solid foundation John created.”

“I’ve been an enormous fan of Hellboy since the very beginning and I’ve got the action figure and lunch box to prove it,” said Chris Roberson. “BPRD has been and remains one of my all-time favorite series, so getting the opportunity to work with Mike Mignola in exploring Hellboy’s early days as a BPRD agent is an incredible thrill.”

“I won’t lie; it’s kinda sad,” said John Arcudi. “Mike and Scott handed me this universe so long ago, and to say it’s been a creatively rewarding experience doesn’t even start to cover it.  From day one on up, I always worked with some of the very best artists in comics, and we’re talking about eleven straight years here!  Of course I’m happy about that, and about having seen the Hell on Earth arc through from beginning to end — but I know there’s still a lot of story to tell, and I don’t want to go stale on this team after the huge solid they did for me, trusting me to play in this fantastic universe.  That wouldn’t be right.  I want to go out while the stories still feel fresh to me, and to Mike, and to Scott.”

I was shocked when John said he wanted to move on,” said Dark Horse Editor-in-Chief Scott Allie. “He’s been essential to growing Mike’s world, the first guy we trusted to bring his own personality to the big stories, making the characters his own in lots of ways. For all the planning that goes into the Mignola books, there are actually things in John’s climactic run of BPRD that we never thought we’d do. He’s leaving BPRD with a bang. After Hell on Earth, we’re tackling Mike’s biggest mythological material, bringing in other voices like Chris Roberson to tell this next wave of stories, and everyone kicking in will be reading and rereading John’s work, me included, to make sure we get it right.”