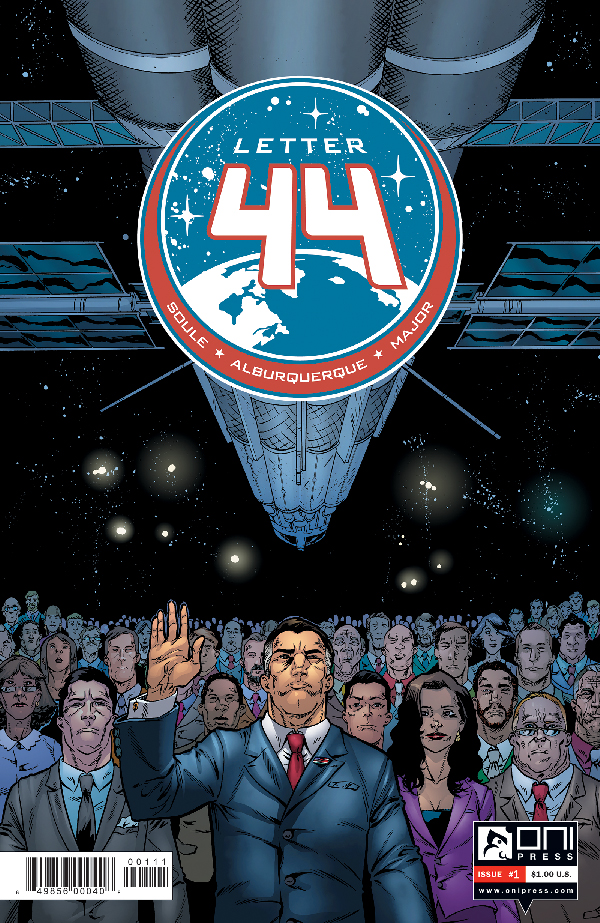 Oni Press has announced a second printing for the sold out Letter 44 #1 by Charles Soule & Alberto Jimenez Alburqurque. 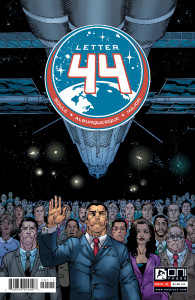 Portland, OR (October 18, 2013) – A new President, freshly inaugurated and faced with an impossible scenario, a spaceship full of American heroes flung far across our solar system, unsure of whom or what will greet them, and a lone structure of unknown origin floating untouched in the vacuum of space.

These are but a few of the elements that have led to the maiden voyage of Charles Soule and Alberto Jiménez Alburqurque’s LETTER 44 #1 to sell out of its initial 22,000 copy print run!

“I am thrilled that so many people are finding and enjoying the first issue of Letter 44!” said Soule. “This is a series that is going to some amazing places–literally–and it’s fantastic to have folks along for the ride. Go Space!”

Riding high atop its unique premise and eye-catching art, LETTER 44 #1 premiered in a special black and white variant edition at San Diego Comic-Con earlier this year, fueling fans’ desire for the series to finally premiere with Guy Major’s vivid colors. Fans and retailers responded thunderously, depleting Diamond Comics Distributors’ stock of the specially priced $1 issue in less than a day.

“Letter 44 is a fun and original concept and is this week’s Challengers Choice book,” said Challengers Comics’ Patrick Brower. “Not just because it’s from Oni Press, whom we love, and not just because it’s written by Charles Soule, who is on fire, but also because it is a good book, worth way more than $1.00. As a retailer, this book is a wonderful addition to Challengers’ shelves. As a fan, I cannot wait for issue #2. Thanks, Oni!”

Holding its introductory price of $1, LETTER 44 #1 will be receiving a second printing with a new cover by superstar artist Javier Pulido (Daredevil, Hawkeye), scheduled to hit shelves on November 27th, the same day as LETTER 44 #2!