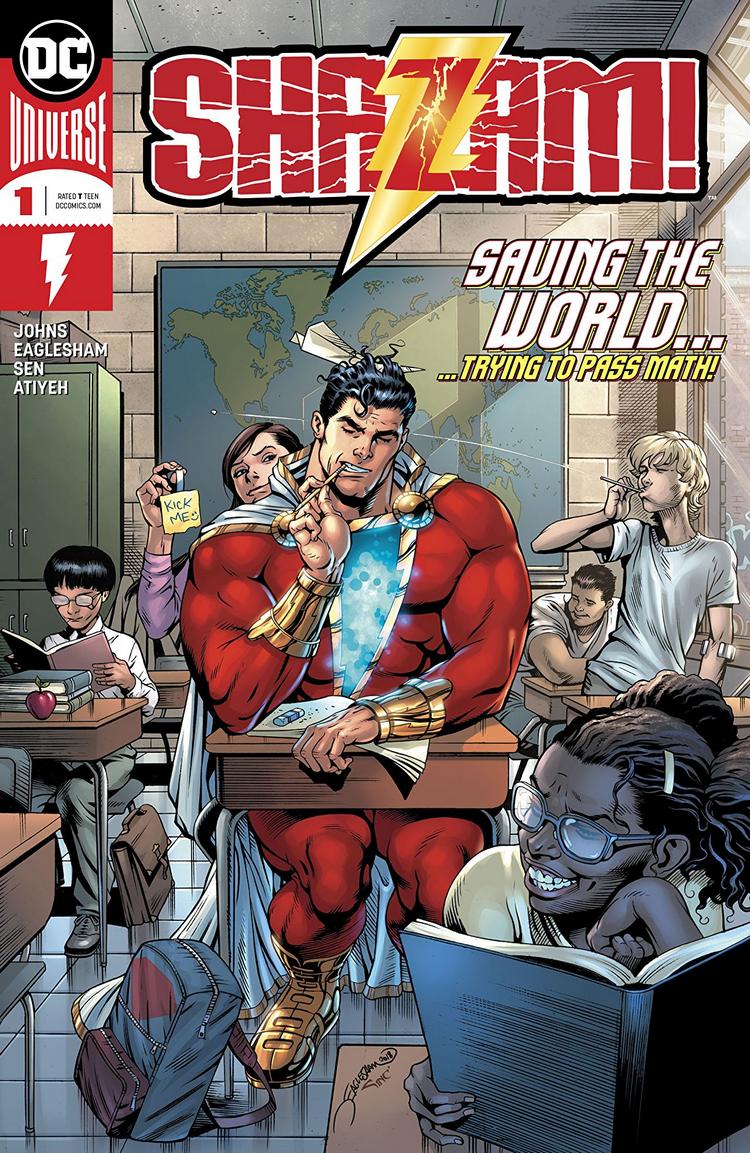 Anyone who knows me, knows that I’m a sucker for any comic that can perfectly capture the nostalgia and feeling of what made all of us want to read comics in the first place. The childlike sense of wonder and excitement, the heroism, and the stories that feel as if they were plucked right from ancient mythology are all things that beautifully encapsulate that old school comic feel. Shazam #1 is the perfect balance of the old and the new and its quite the adorable ride. Geoff Johns and Dale Eaglesham have crafted a solid first issue that introduces you to the most important aspect of the Shazam comic and quite possibly comics in general, the power of family.

In his first issue of the series Geoff reintroduces us to the Rock of Eternity and the mythology surrounding it while retelling the classic origin of how Billy Batson came to possess the power of Captain Marv…..Shazam. It’s at this point that Geoff then delivers quite possibly the most adorable and nostalgic part of the book when a group of robbers wearing Justice League masks attempts to rob The Museum of The American Revolution and the Shazam family springs into action as their super powered counterparts. John’s does a fantastic job of crafting very defined personalities for each other children which shine through in their superpowered forms as well. I’ve always believed that part of the appeal to Shazam is the fact that he is the embodiment of everything children and even adults dream about when they read comics. Shazam is the embodiment of our desire to go from regular old us to the super powered way that we see and imagine ourselves and Geoff very clearly recognizes that. Though Shazam possesses the wisdom of Solomon its always refreshing to see that the childlike wonder and enthusiasm of Billy Batson and the entire Shazam crew beautifully shines through and allows them to have some fun with their powers.

Geoff John’s writing is only elevated by Dale Eaglesham’s beautiful art and Mike Atiyeh’s fantastic colors, which feels like the perfect fit for John’s story. The marriage of the their talent perfectly combine and elevate each other’s work. Eaglesham’s artwork is so full of motion and personality that it causes John’s writing to simply leap off the page. Atiyeh’s colors are so beautiful and vibrant that they keep the fun and energy of the series going at all times. These three put together a pretty fun first issue that almost has a Spider-Man: Homecoming feel to it.

Overall Geoff Johns, Dale Eaglesham, and Mike Atiyeh have put together an extremely fun and youthful first issue to what I’m hoping is a very long running Shazam series. Johns, at no point, tries to run from the fact that he is dealing with a group of children who have the ability to transform themselves into superheroes and he not only has fun with that, but he lets them have fun with that. Throughout the issue you can tell that Johns absolutely adores this character and all of the characters and mythology that surrounds him. He maintains a sense of wonder and amazement that is just beautiful and there are multiple times during the issue where you will find yourself smiling. Johns also does a fantastic job of really driving home how important and powerful family is and there is a line in the comic where he writes “For family is the true power of Shazam”.

There is a surprise at the end of the issue that I won’t spoil for you, but I will say I’m very interested in seeing where Johns takes it what he does with it.