We are freshly into April, and with the turning of the calendar we get a new Shop Talk! Chris Humphries, owner of Alpha Comics, joins us to discuss current trends in the industry, the big releases of the past month, and what books will occupy the top spots on the charts for April! 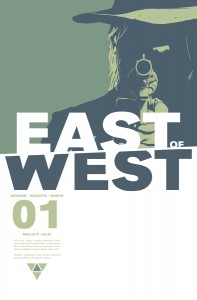 Aaron Long: East of West lit up the Internet this past month. What was the reception in the shop? Overwhelmingly positive? Or reserved compared to the Internet fervor?

Chris Humphries: I knew East of West was going to be a hit so I ordered issue #1 on par with the big Marvel Now sellers. I thought that would last me until #2 came out. Those copies actually sold out by Tuesday. It even out-sold all the DC titles with the exception of Batman for March. That’s even more impressive when you consider there weren’t any previews of the book online until shortly before the release.

AL: Age of Ultron has been hitting the stands fast and furious. Have you seen an uptick in interest since the beginning of the series, or a drop off as the series has continued?

CH: Right now Age of Ultron has a upward momentum. More people are getting onto the series. I’m seeing a lot of people playing catch up and getting the whole series so far, including the tie-ins.

AL: Batwing’s big reveal happened this past Wednesday. Has the creative shakeup given this title a spark in the eyes of readers? Or are the fans primarily carry-overs from the beginning?

CH: Batwing actually has no audience at the store. I stopped ordering it months ago. I did however bring in the new issue if someone was interested. No one picked it up. Batwing just seems to be a character that not a lot of people care about. 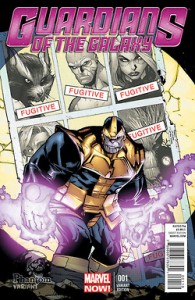 AL: Thanos Rising dropped this week, and pages from Infinity are starting to drop. Since the Thanos appearance in The Avengers, have you noticed this character on more people’s radar in the shop? Has he become an A-list draw as a villain for your readers?

CH: There is definitely a draw to Thanos thanks to the Avengers movie. Trades of the Infinity Gauntlet are constantly moving. A lot of people were excited for the Guardians of the Galaxy Phantom Variant with Thanos on the cover. Thanos Rising is moving at a good pace too. Naturally I overstocked because the character is a big hit these days.

CH: Jupiter’s Legacy #1 is going to be a monster. I wouldn’t be surprised if it made it’s way into the top 10. For dollar rank Detective Comics #19 will likely take the top spot because of it’s price point.