Shop Talk with Chris Humphries of Alpha Comics returns for the second installment of 2013, this time filled with discussion of Marvel Cosmic, the Kirkman franchises, and the interaction between shops and crowd funding movements like Kickstarter. Without further ado, on to the main event! 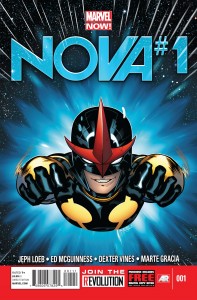 Aaron Long: Marvel Cosmic comes back full force this month with Nova and Guardians of the Galaxy. How has the buzz been for the books in the shop?

Chris Humphries: People are talking about these comics. The creative teams are very strong on Guardians and Nova. I think people are also interested in these comics through curiosity on where the Guardians of the Galaxy movie will go.

AL: Invincible #100 just hit the market. With the huge popularity of The Walking Dead, have you noticed a spike in the other Kirkman titles like Invincible, Super Dinosaur & Thief of Thieves?

CH: The Walking Dead is a huge hit in the shop here. However the majority of these fans have been introduced through the TV show and haven’t gone deep into the comic culture just yet. Invincible doesn’t have a large audience at the shop. Thief of Thieves does well.

AL: This month sees the end of Death of the Family. How is this Bat-event comparing to Night of the Owls?

CH: One thing that I’m noticing about Death of the Family compared to Night of the Owls is that the titles outside of Batman haven’t really gotten a boost in numbers. The die-cut covers moved really well but with the following issues returned to normal numbers. With the Owls story-line, Nightwing saw a significant and lasting boost in numbers. 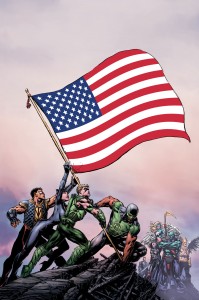 AL: A crowd funding question for you: are Kickstarter and Indiegogo places that you keep an eye on for books you figure may intrigue your clientèle or do these outlets really run parallel to the direct market?

CH: When it comes to self distributed comics on Kickstarter, if people are interested in a comic and they pledge, they will get the comic. I can’t pledge as well and hope to sell that same comic a second time to the same person. Another issue is that I can’t afford to pay for product that I wont receive until 6 months down the line. I also have concerns about not receiving the product at all. But then there are crowd-funding projects for comics that are intended for regular distribution. These comics get the same chance as any comic has in being ordered through previews, only these comics also have more visibility because of being promoted on the internet.

CH: This is a tough month to call. I think Green Arrow should show up in the top ten. Justice League of America should also have a good ranking to start, but I don’t think it will hit the top spot. I can see Uncanny X-Men possibly getting the #1 spot thanks to the success of All-New X-Men.