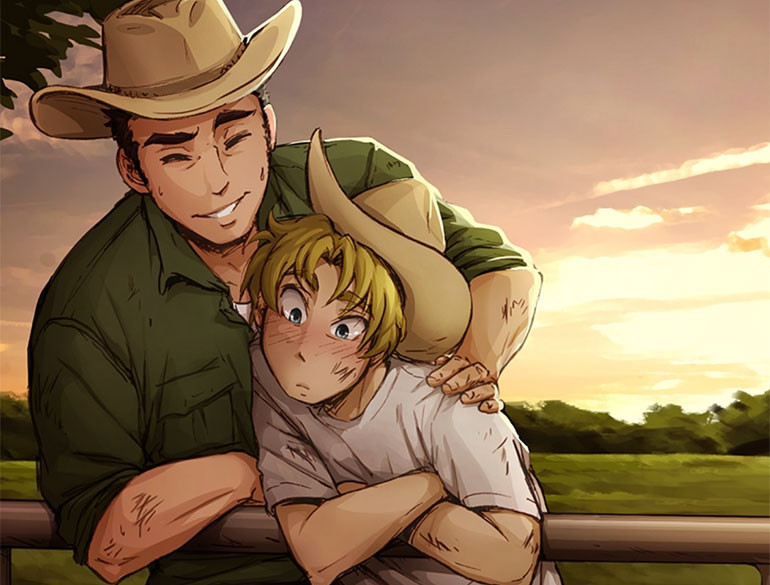 “Can two dudes ride the same horse,” she asked into the phone. Adding it to her mental list of research questions she’s already asked.

Red didn’t know if two people could ride on one horse or what happens when someone is bucked off a stallion or what the typical schedule is for a ranch hand or when the appropriate time to say ‘Yee-Haw’ is. She isn’t a cowboy but one of her characters is.

Her questions caused some confusion when this punk artist suddenly began asking for country music recommendations, attending rodeos, and even buying those sexy cowboy calendars. 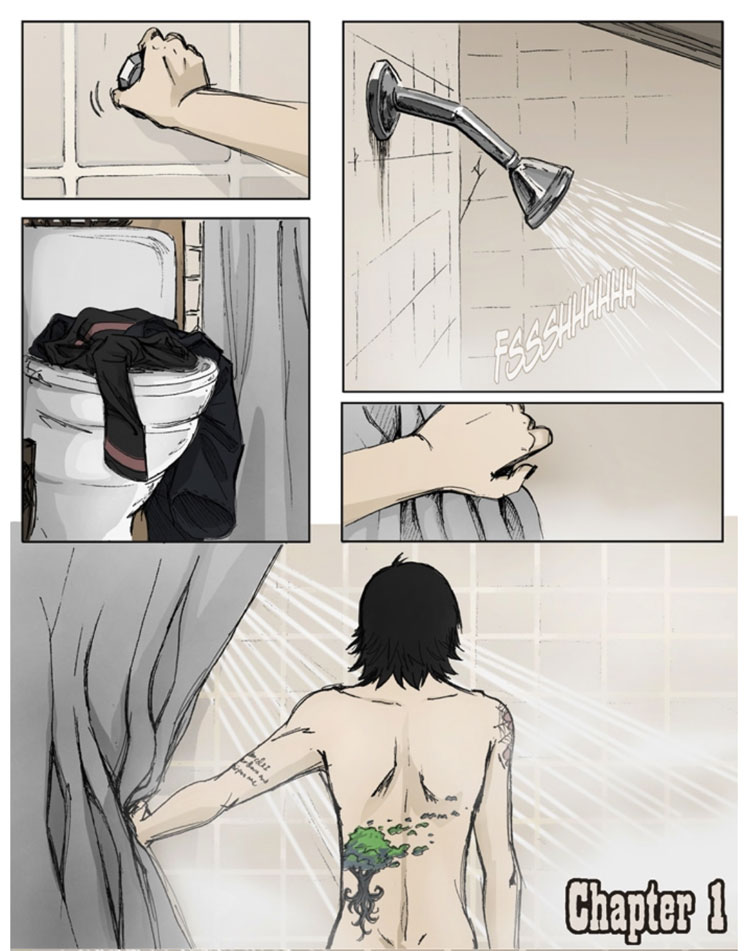 Spurs and Stripes is what she said to explain to her friends and family why she’s so interested in the western lifestyle. This is a gay webcomic bringing together two characters, an emo and a cowboy. Their lives and hearts intertwine throughout the slice of life webcomic. As a punk and horror lover, webcomic creator RedHerring (or just Red) received some raised eyebrows — which raised even higher when she explains that it’s for a gay webcomic.

While she was growing up, Red had a phase of reading cowboy romance novels. As a fan of genre, she knew that it did exist such as Brokeback Mountain. But it didn’t seem like the genre had caught on in webcomics. Venturing into an entirely different genre as she is primarily a horror writer, she wanted to create her own cowboy romance webcomic. Red created the world of Spurs and Stripes with some hot and heavy country romance. She added Kylee, a young emo as a fish out of water to spice things up. 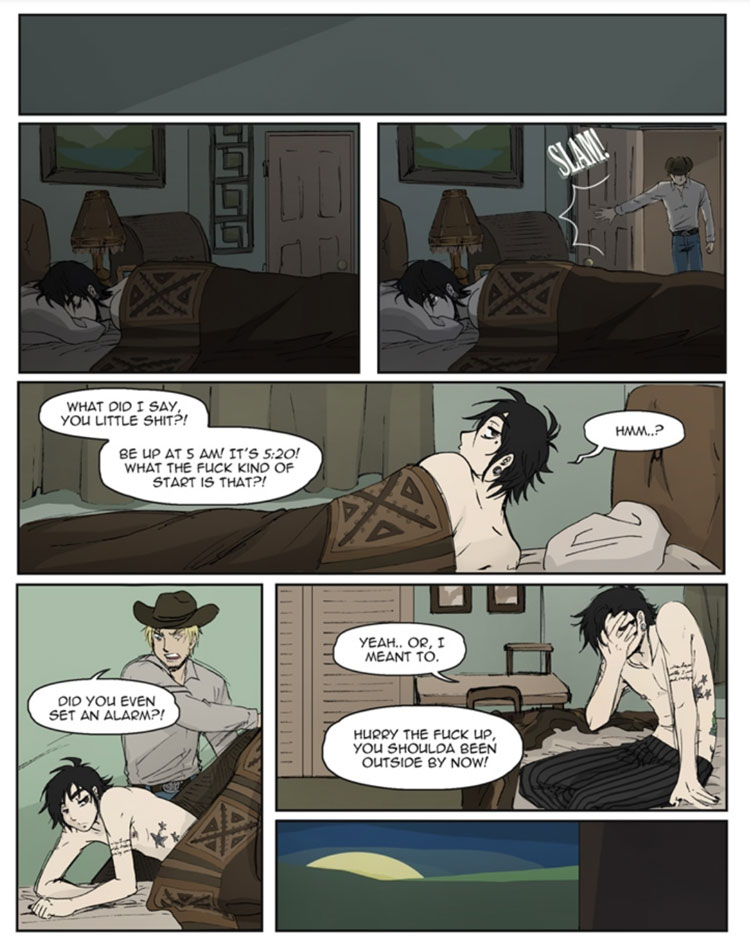 This NC-17 webcomic is full of romance, drama and sexual tension. The story follows Kylee an emo delinquent caught selling drugs in Texas, and Kimrick, the no-nonsense cowboy in charge of Kylee’s community service. Kylee follows the stereotype of 19-year-old punk including rock music, eyeliner, and angst. Kimrick follows the stereotype of a 27-year-old cowboy; country music, plaid, and a strong work ethic. What they have in common is their sexuality and their stubbornness resulting in a love interest between a rebellious teen and a stoic cowboy.

Red’s art is more of a traditional anime style which shows in her work. With sketchy linework instead of one pass outlines, she gives more character to her characters. That’s one example of how she sets herself apart from other artists. It’s been a style she’s been building on for decades. 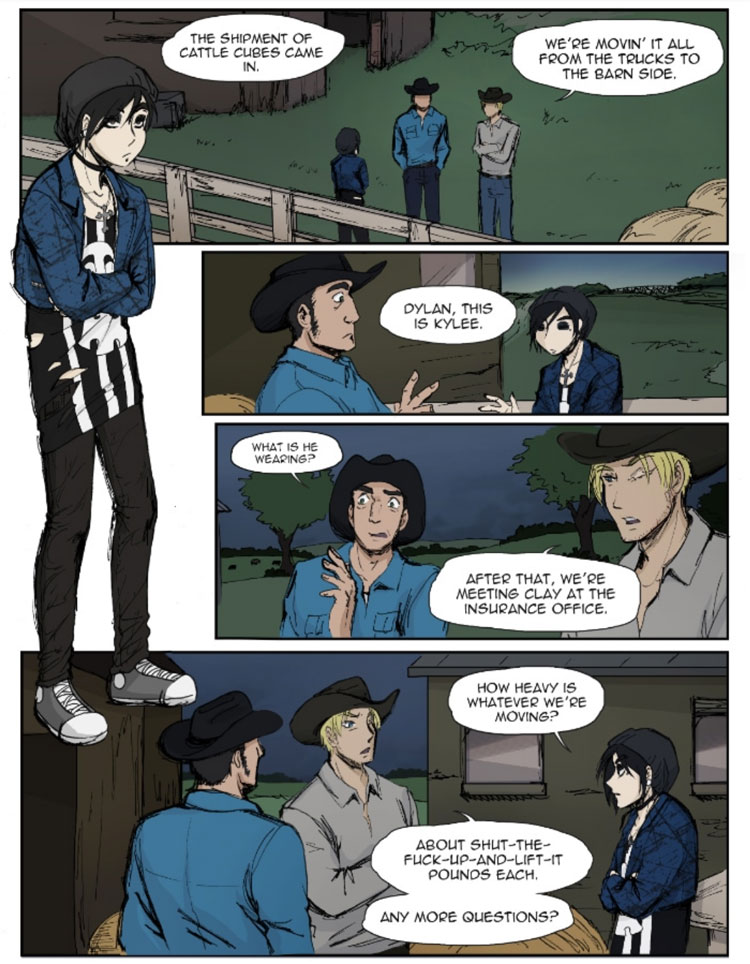 As long as Red can remember, she’s been an artist. It runs in her genetics after all. With a successful graphic designer as a father and endless support from him and her family, art was always a prominent part of her life. During her childhood, she’d draw and draw. Her school notebooks were always filled with artwork. As a kid, the subjects were cats and Pokémon, for example. Now her notebooks are filled with artwork of a cowboy persuasion.

Thinking back to 2015, the start of Spurs and Stripes, this isn’t where Red expected to be even though she isn’t quite sure where she is at the moment. It’s wonderful though, she thinks.

Spurs and Stripes is her passion. This is a project that she’s worked on for nearly 5 years posting artwork of her characters each week.

Knowing that one day it’ll end is bittersweet for both her and her audience.

A freelance writer with several published articles for publications including Burlesque Bitch, The Griff, Toxic Dolls, as well as working with the Institute for Investigative Journalism in Nov. 2019, Dylanna Fisher has been published in The Star and Global Edmonton. She’s been immersed in the webcomics community as an observer, reader and enthusiast for years.