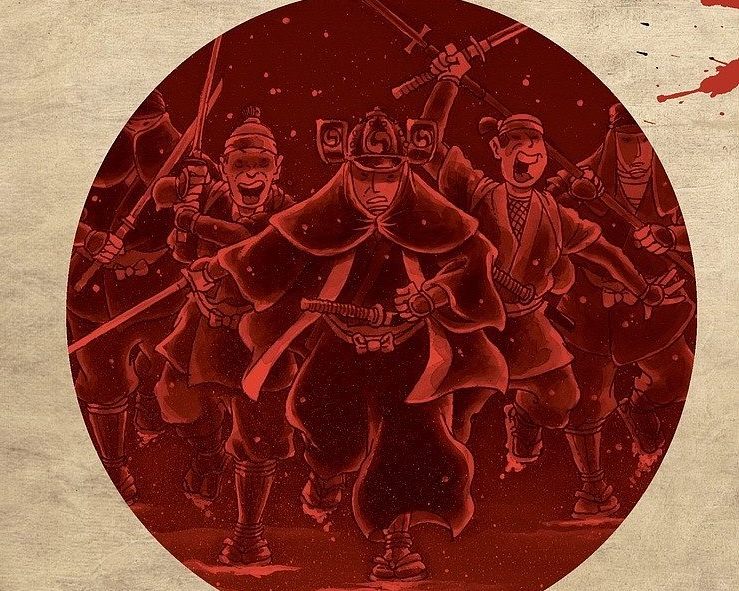 It obvious that the story of the 47 Ronin has been a subject of adaptation and revision for hundreds of years, so the 2014 Dark Horse adaptation is in tremendous company. There are obviously numerous Western comic and Japanese manga adaptions, some of which are more faithful to different aspects of the 47 Ronin story than others. What is the ‘root’ of the narrative then that these comics and literary works are drawing from?

The back-matter material from Issue #1 of the Dark Horse adaptation mentions the adaptation version called bunraku, or puppet plays. This version of the story serves as one of the prime sources which Mike Richardson and Stan Sakai draw from, although they obviously correct one of the key issues with the bunraku version, namely that all the names were originally changed. Lord Asano, Lord Kira, Oishi, etc… are all called by very different names in the Kanadehon Chūshingura version of this story. Americans who want to read the play-version of this story can find English translations thanks to Donald Keene. Despite the differences in names, both the translated Keene play and the Richardson/Sakai versions both engage in one important point. In “A Guide to Reading Chūshingura” by Bryan W. Van Norden of Vassar College, the key issue of dramatic tension is described as follows:

“… the story has been told from a variety of perspectives […] but the first major fictionalized account (and still one of the most popular) is the bunraku (puppet play) version […] co-authored by Izumo, Shōraku, and Senryū. The play and the incident of the Forty-seven Samurai both belong to the Tokugawa Era. During this long period of peace and prosperity, the samurai class seemed increasingly irrelevant, particularly in the face of the rising merchant class. As a result, the incident of the Forty-seven Samurai seemed moving because of the almost quixotic nobility the samurai showed. […]The story has inspired Japanese audiences (and can equally move Western ones) for a variety of reasons, but one of the primary themes is the tension between giri (義理) and ninjō (人情). Giri is one’s “socially defined obligations,” while ninjō is literally ‘human feeling.’ …”

Sakai’s art in particular should be addressed in their depiction of Oishi throughout the Dark Horse work. There are numerous examples of when Sakai depicts Oishi’s expression as being fraught with tragic expression, such as when he cryptically addresses how Lord Kira’s involvement in Asano’s demise is not something he will ever forget and that he will be dealt with in time. Oishi’s lingering resentment towards the man his lord tried to kill demonstrates a conflict between giri and ninjo in that, according to social conventions, Oishi should be bound to obey the will of the Shogun (who praised Kira), yet his feelings concenring ninjo show he had deep emotional ties to his dead lord, Asano. Some would argue the entire pursuit of revenge by the 47 Ronin presents a clear choice to commit to ninjo over giri.

The Dark Horse comic utilizes specific dates and times in accordance with historical record at the tops of chapter changes between Issues #1 and Issue #2 specifically. The importance here is that, in the comic as in history, Lord Asano engages in his altercation with Lord Kira and then commits suicide all within 24 hours. Specifically, Lord Asano and Lord Kira engage in their struggle in the morning and Lord Asano dies before nightfall. This presentation in the comic in in accord with the historical court documents, yet the comic also presents “what” sparks the conflict between the two men, i.e.: Asano is kicked in the face and insulted by Lord Kira, thus sparking his murderous outburst. This is part of the heritage of the fictionalized version of events. This element matters for a comic in the same way it mattered to those who originally re-told the story during the Edo period. Author/scholar Stephen Turnbull elaborates this aspect of the story in the Foreword to the novelization of the 47 Ronin story put out by Tuttle Classics. Turnbull writes:

“The reality is that no records or personal letters exist that could shed any light on the nature of the grievance about which Asano had protested and which had driven him to his impasse, and the simple reason why we will never know the truth behind Asano’s motivation lies in the fact that he never had a chance to defend himself in a court of law or even to make a statement to the authorities who rushed to condemn him. The palace records reveal the incredible speed of events. Asano attacked Kira sometime before midday the order placing him in custody was issued at 1 p.m.; the order for his execution was delivered at 4 p.m. and he committed seppuku (ritual suicide) at 6 p.m.”

The Dark Horse adaption, via Sakai’s art, embraces the classical depiction of both Asano and Kira. Both men adhere to narrative elements which make their role in the narrative engaging for modern audiences today in the same way it once did during the Edo period. Sakai depicts Kira, for example, as a mugging, scheming, and greedy figure. Likewise, Asano is presented as a stoic and virtuous figure who puts up with Kira’s abuses until he snaps. Sakai and Richardson’s beautiful depiction(s) of these characters runs counter to history. Turnbull says how “the populace of gaudy Edo Japan sought the more tangible heroism of a bygone era. Kira Yoshihisa represented the ordered, dispassionate, bureaucratic and very boring world of the Shogun’s administrative staff, not the adrenaline-fueled province of the samurai swordsmen.” Turnbull also says how “in Chushingura, Kira Kozue-no-suke Yoshihisa is an out-and-out villain, an attribution that is essential if his murder in very suspicious circumstances is to be transformed into an uplifting account of samurai virtue.”

The history of the 47 Ronin, as Turnbull says, is one where the confining and bureaucratic environment of the Tokugawa Shogunate forced men into a conflict where they were forced to chose between their obligations and their feelings. The strict, stiffing world of samurai who no longer had wars to fight made for a world where men were expected to find reasons to present themselves as honorable. The deeds between Kira and Asano make for fantastic drama as a narrative, which Dark Horse adapts beautifully. By embracing the historical dates and names of the 47 Ronin story, while also following through with the fictional accounts of what we have no records for, the Dark Horse adaptation of the 47 Ronin story serves as a fantastic introduction to the basics of the story and the history of these samurai’s final days. 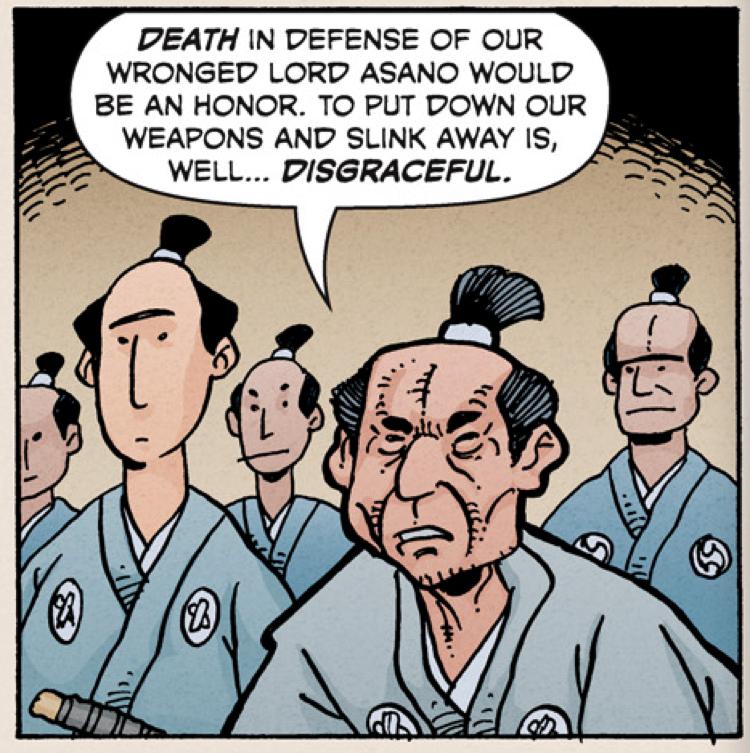 I hope that the links provided provide enough background reading material for those who wish to dive more deeply into the fantastic story of the 47 Ronin. There is also a great book about the Shogun who oversaw the execution of Lord Asano and the 47 Ronin, Tokugawa Tsunayoshi, for those who want to know more about the political environment that spawned the tensions within the story where etiquette and values are concerned. Columbia’s website also provides these interesting accounts concerning the story for those who want alternate reading material alongside the comic by Richardson and Sakai.

Next time, a deeper investigation into the Tokugawa Shogunate period through the comics Lone Wolf and Cub, The Samurai Execution and The Path of the Assassin. All three of these comics have the incredible Kazuo Koike involved as the writer. Kazuo Koike also was involved with the Dark Horse adaptation of the 47 Ronin story as an Editorial Consultant.