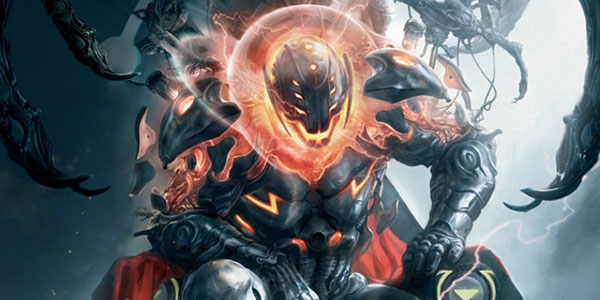 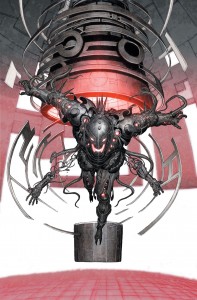 At Comic-Con this year, which wrapped up its last geek-laden booth of treasures two weeks ago, it was announced by Joss Whedon what villain would be appearing in the Avengers 2 film. The villain will be so vital, in fact, that its name will be a part of the new film’s title. This villain is Ultron, the mechanical super-being who has not only seen a resurgence in Marvel Comics thanks to the Age of Ultron event, but who is also one of the more famous (and infamous) villains the Avengers have ever tackled.

While some ask “Why no Thanos?” and others ponder villains they would rather see, Ultron’s selection presents a few amazing points to discuss — not only about the character itself, but also about how machines are viewed in American comics. Needless to say, we have a long history of nefarious mechanical entities like Terminator, Skynet, Cylons, Glados, and many more. Where and how then does Ultron fit into all this?

Sins of the Father

While at heart Ultron can exist as his own unique entity, one that does not need to be dissected or viewed on a character flowchart to be understood, a key part of his mythology has always encompassed the character of his creator: Hank Pym. Pym, a founding member of the Avengers and frequent changer-of-his-super-hero-identity-title, is arguably the smartest man in the Marvel Universe (although I am sure Reed Richard fans would have something to say about that). Unfortunately for Hank, many writers have also taken to presenting him as a character whose flaws can be both in the range of “understandable” and “you built ANOTHER killer robot, Pym?” 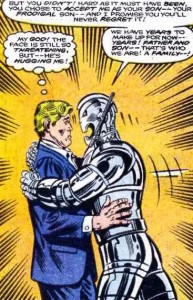 Given that Pym has been presented at times with a genius — albeit less than stable — mind, it is interesting to note that his creation of Ultron uses a copy of his brain patterns in the machine’s design. When Ultron was revealed to have been created by Pym four issues after his first appearance (occurring in issue 57 of the original Avengers run), this set the precedent to connect Ultron to Pym. Ultron becomes a machine enraptured by hatred of its creator as well as one who wants everything Pym has… including Pym’s wife, Janet. These actions rather darkly connect back to the Greek myth of Oedipus, the Greek king who was responsible for killing his father, wedding his mother, and basically disturbing every child who ever had a high school English class.

Some writers have been divided over where the line is drawn on Ultron being responsible (as far as a thinking machine can be held responsible) for his evil and where he is simply corrupted by Pym’s brain patterns. Of course, what that says about Pym is rather damning, hence some writers have ignored it in favor of making Ultron come off as more “super villain” than “flawed machine.” These ideas, that of ‘what makes us good or bad’ was written about by William Godwin, father of Frankenstein author Mary Shelley.  Godwin frames the argument as ‘Nature vs Nurture’ and it has been a debate taken up by science-fiction ever since.

Still, regardless of the continuity of action that writers might choose to use, Ultron has been bound to Hank Pym for a majority of the character’s existence and the two are inevitably always going to be linked back to each other in time. 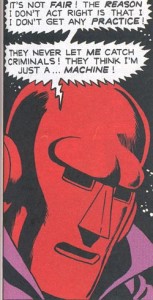 If comic book robots have one theme, it is rebellion. Almost down the line, if a reader looks at some of the most famous robots in comic history, they all rebel against their creators. One of the first robotic heroes in comics was The Human Torch, first appearing in Marvel Comics #1. The machine (an android technically, as it was modeled on the human form) turns on, ignites into flames, rebels against its “father/creator” and then strikes out on its own. While The Torch did not become a villain like Ultron, it certainly kept with the theme of wanting something other than what its creator intended for it. Another of the most famous Avengers, the Vision, appeared as a machine-child of Ultron. In a moment of irony, Vision eventually rebelled against his own rebellious creator and joined the Avengers instead of destroying them. Even on the DC Comics side of the equation, the character Red Tornado (again, an android) rebelled against his villain creator T. O. Morrow and helped the Justice Society instead of destroying them. With rebellion running through stories of the Creator and the Created as such a powerful theme, one must ask, where does this all come from?

While the Bible is one of the biggest examples people might jump to, one should pause to look at another work first – Milton’s Paradise Lost. It is from this text that almost all notions of Satan as a “rebel” angel emerge, thus placing the idea within the purview of a fictional text and not explicitly a spiritual one. In Paradise Lost we see the “origin story” of Satan and how he fell out of the Lord’s favor. Milton’s epic poem would become a Western template for the whole idea of rebellion for countless generations, so much so that many people believe aspects of that poem are in the Bible. 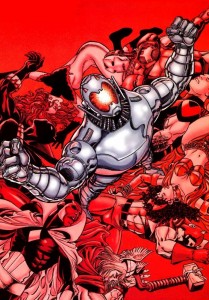 Milton’s Satan and Ultron, as well as many other classic mechanical villains, all follow the same idea: a Creator’s “greatest/best” creation turns against the creator and tries to supplant/destroy him/her/it. The rebellion fails, but permanent enmity lasts between the creator and the fallen creation.

Humankind in the West has always viewed ourselves as possessing a soul, or spirit, or unique quality that divided us (on some or many levels) from ‘lesser’ things, i.e. animals, lawn furniture, garden gnomes, etc. Presenting a Creator like Pym whose machine Creation turns against him is, in a weird sense, keeping with the Western literary tradition. While Mary Shelley did wonders for humanizing the creature in Frankenstein by showing how Victor had failed as a creator, the end results were still enmity and pain as the lasting bonds between the Creator and the Creation. Another older myth (which was an inspiration for the comic by Steve Niles entitled Breath of Bones from Dark Horse ) is roughly called ‘The Golem of Chelm,’ in which a rabbi named Eliyahu created a stone creature called a golem. Unfortunately, the golem becomes too dangerous to be allowed to remain alive and Eliyahu removed the spell/word-of-power that animates the Golem so as to save the whole of existence.

Age of Ultron and Beyond 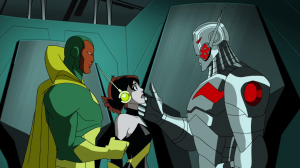 The past year has seen a large up-swing in content focusing on Ultron. Ultron was repeatedly used in the TV series Avengers: Earths Mightiest Heroes and he was also used in the comic-event Age of Ultron written by Brian Michael Bendis. The story re-frames many concepts famous about Ultron by this present point in his story life-span: Ultron constantly evolves and grows stronger, Ultron seizes the Earth and re-makes it in his image (amusingly, this was done in the animated DVD-film Next Avengers: Heroes of Tomorrow), and Ultron has a means to his own end thanks to Hank Pym.

While the nature of the Age of Ultron comics might be viewed as divisive to some fans, the fact remains that the popularity of his character remains strong after 45 years. Wherever Joss Whedon goes with the character (reports claim Pym will not be used for the origin story of Ultron itself), one thing will remain consistent – The Avengers will fight an enemy capable of handling them all at once and whose designs will almost certainly consist of world domination. In any case, one can only hope one of Thor’s famous lines is uttered: 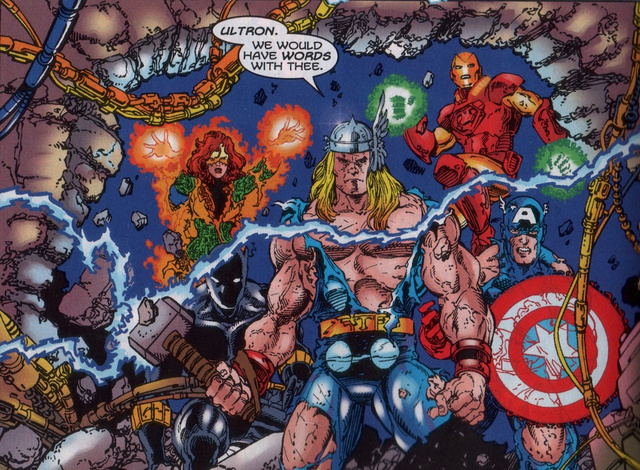