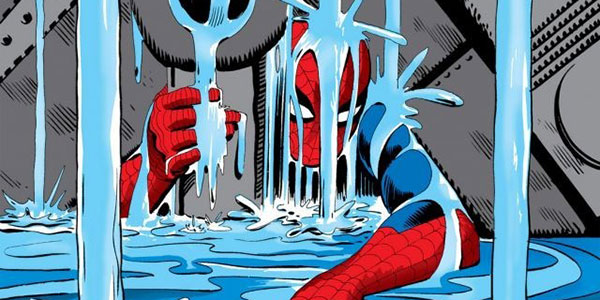 Within the American comic-book origins that started with Siegel, Shuster, Kirby, Lee, and Goodman, the ability of their costumed heroes to combat the forces of crime was paramount. The primal element of the superhero’s makeup was his ability (supernaturally or normally) to combat elements within a city or a nation that lead to the emotional or physical pain of others by illegal means. While this end of the superhero aim was rather clearly established for the earliest comic superheroes, the means of how they came to embrace a life towards that end has been diverse, as diverse as the multi-colors on the bright and flashy colors that the heroes of the 40s-70s adorned themselves in.

Of the dominant means that brought about the heroic impulse in heroes there are at least four major “origins” of the superheroic impulse. The first is in tragedy, in being a person who underwent a loss that shifted the hero’s perspective away from his own desires and outwards towards the desires of others. While this unique impulse is primarily Western (Eastern heroes, as we well explore, have different sensibilities) perhaps no better Marvel hero captures the humanity of this experience than Spider-Man.

Prince Hector and the Spider Factor

While the introduction to a discussion about Spider-Man might be bizarre, one of the most tragic heroes of literature to discuss first is Prince Hector of Homer’s Iliad. The noble son of Troy was a character whose life, literally, was defined by the poor choices of his countrymen, his family, and the gods above who worked against his kingdom. The story of how Hector holds two aspects that are key to understanding heroic loss. First there is the aspect of Hector as a Trojan, as a man who watched his kingdom be assaulted and, worse still, who watched as he realized he slew the cousin of Achilles. Few choices made by any character in the whole of Homer’s story can be as doomed as that one, bloody deed. Hector, despite his circumstances, behaved with honor and he knew that, no matter what, he was to honor the gods (even as they assailed his land), to honor his family (even if his brother had helped start the Trojan War) , and to honor his enemy (even if that enemy, at first, showed him no such religious or battle courtesy). Hector was a man who understood the responsibility of what his title and his power as a warrior required him to understand. So, as we are discussing Spider-Man, you can see how the responsibility Hector held with his power is important to examine.

The second thing that lines up Hector and Spider-Man is their commitment to the battling of unstoppable odds, to making sure that no more lives were taken by the enemies at their city’s gates. While it is true that the scale of the war against the Greek and the Trojans is different than the scale of criminals against New York, one thing is certain – they are both unwinnable. Hector never stood a chance against the Greeks because his story is already over. Spider-Man can never defeat all the crime in New York. Neither, however, have anything to do with the nature of what best supports the raw power of a tragic hero. A tragic hero is born from some painful act or sorrowful revelation, yet they are heroic because they turn that grief into something that glorifies the best of their culture. Hector and Peter Parker are to different kinds of tragic heroes, each holding a position at opposing ends of time and narrative space, but they are still both heroes and their stories are worth examining.

Spider-Man commonly brings comic reader’s attentions to one of two aspects depending on the kind of hero they thing he is. One reader might think of the clownish Peter Parker in the Spider-Man suit who uses humorous jabs to demoralize/enrage his opponents while he foils their schemes. Other readers might recall instead the grief stricken Peter holding his uncle as he lay dying in the street for doing the right thing. Both these elements, the grief and the humor, are the primary elements in the iconic image that makes up the ‘twin mask’ symbol that represented the different aspects of Dionysus and of Greek theatre itself. Spider-Man might not be the first hero one would look to for a representation of the ancient theatre, but Peter does indeed have a life that is polarized between the absolutely hilarious and the utterly tragic. 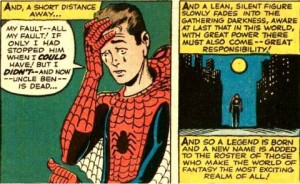 Spider-Man himself started as a hero who was in no way on the road to being anything other than a petty bully at best and a villain at worst. He pitted his supernatural strength against those who were naturally weaker than himself (in a sense becoming the very kind of bully who made his life miserable), he ignored the impact his family had on his personal life when he would put off their needs, and he even turned a blind eye to crime, not out of indifference (which is already rather bad), but out of a kind of dark justice (which is worse!). At one point Peter, when talking about the bully he received, says “This double identity jazz is for the birds! I can’t take much more ribbing as Peter Parker! Sooner or later, someone’s gonna loose a mouthful of teeth!” At another point (after more bullying) he says “Some day I’ll show them! Some day they’ll be sorry! –Sorry that they laughed at me!” Peter had some genuine psychological issues regarding being bullied and giving him superhuman strength and agility was, at first, not explicitly the best thing for him. But then, as most of comic and movie fans now know, a member of his family died because of his actions and that death turned him from just a sad-sack with strength into a superhero. This moment of tragedy played out according to one of the most classic definitions of the term set down by the Greek thinker Aristotle. It is as follows:

“Tragedy, then, is an imitation of an action that is serious, complete, and of a certain magnitude; in language embellished with each kind of artistic ornament, the several kinds being found in separate parts of the play; in the form of action, not of narrative; with incidents arousing pity and fear, wherewith to accomplish its katharsis of such emotions. . . . Every Tragedy, therefore, must have six parts, which parts determine its quality—namely, Plot, Characters, Diction, Thought, Spectacle, Melody.” [Translation by S. H. Butcher]

Peter losing his uncle was the spark that opened Peter’s eyes to the world around him, to the nature of life and death, to how one action in his own life was playing out everywhere in New York. Spider-Man was created in 1962, a turbulent time of intense violence and riots for the citizens of New York. Between 1965 and 1972 the rate of robbery (the kind of crime that killed Uncle Ben) in NYC shot up from 28,182 to 97,682! Aggravated assaults went up from 27,464 to 39,145. Violent crime went from 58,802 to 145,048. New York was under assault from a wave of situations that compounded upon each other in a nexus of bloodshed. Peter Parker willingly decided to don a mask and fight that rising violence with the gifts he had acquired. While Peter came late to the Responsibility Party that Prince Hector had been raised in, Peter joining the cause of combating the evils that beset his home are no less heroic that when Hector first called his men together to face the approaching Greek forces.

Spider-Man had a foundation of tragedy, one that that would repeat itself frequently as he first lost his uncle and then, most tragically some might argue, he lost the first love of his life. The death of Gwen Stacy is believed by many to be the defining moment when the tone of what a comic was or was not could be shifted from silly capers and fisticuff fights to something darker, something more elemental. Some called this moment the transition from the Silver Age of comics to the Bronze Age, just how some might argue the creation of the Iliad as a written text transitioned from the oral past to the literary narrative future. Still, despite the actions that constantly assailed Peter Parker, he continued to still be maintained as a humorous character across his countless iterations. 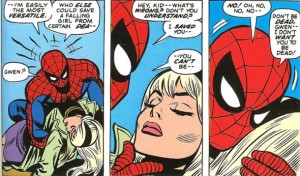 The importance of comedy in our lives is one no American be a stranger to, especially (for some) when times are darkest. The dominant idea some have for Spider-Man is that he is a figure who manages to laugh even when things are at their gravest. In Avenger teams he is often the character to crack a joke right as Galactus appears on the horizon and all other heroes are left without words. He laughs when he is being threatened with death, when his plans go wrong, and also when he needs to cheer up his friends or fellow heroes.  Regardless of which variation of Peter Parker you enjoy, one of the largest compliments many people had for the newest of the Spider-Man films is the fact that Garfield’s Parker was so very funny. Humor and laughter are the soul of Peter/Spider-Man’s character and they are important for keeping him around and being relatable.

Humans all go through horrible events that test us, that challenge us, and that threaten to transform us from a noble thing into a barbaric thing. I bring up The Iliad because Hector was, perhaps, the ideal hero who maintained his virtues in the face of annihilation and enemies who were stronger than himself. Hector was an ideal as much as he was a prince. Spider-Man does not start in the same vein as Hector, but both are figures who maintain themselves in the face of conflict. Spider-Man’s humorous jabs became his means of weathering the storms that the ship of his soul had become tossed upon. In a very revealing article about the nature of humor regarding 9/11 Daniel Kurtzman wrote the following:

“Many things about America changed, but you can’t kill humor, any more than you can kill a human emotion,” Siegel of the Onion said. “You can’t kill sadness or fear or joy. Obviously people are going to laugh and people will still be sarcastic and snide and ironic and winking and insincere. That’s a good thing. That’s a sign of the return to normalcy.” [the full article can be found here.]

The highest quality of a tragic hero is that he does not loose himself to the darkness or pain that set him on the heroic path. Many genuinely amazing villains started as heroes but became corrupted or twisted over time. Spider-Man might not seem like the stoic, immovable hero of the Greek stories but in his heart? In the heart of Spider-Man, and all Spider-Man fans, there beats hearts that will never let their lights be enshrouded by darkness and pain.

Laugh on. Live on.