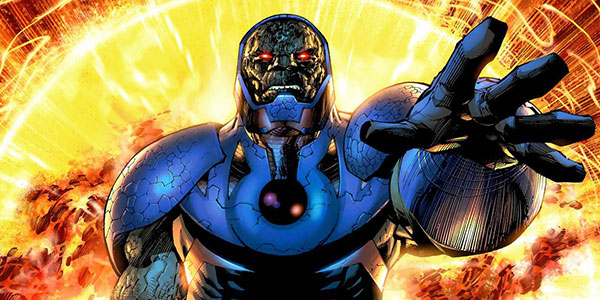 I. Am. The. New. God. All is one in Darkseid. This mighty body is my church. When I command your surrender, I speak with three billion voices. When I make a fist to crush your resistance, it is with three billion hands. When I stare into your eyes and shatter your dreams and break your heart, it is with six billion eyes! Nothing like Darkseid has ever come among you: Nothing will again. I will take you to a hell without exit or end. And there I will murder your souls! And make you crawl and beg! And die! Die! Die for Darkseid! 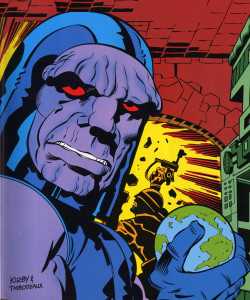 Since before recorded history humanity has asked the question “are we alone in this universe?” While we have crafted (or been inspired by the divine to craft) stories that explain the foundations of our universe as being manufactured by the unseen entities some call “gods,” we have not simply felt that the need to regulate the material world to the hands of unseen forces.

We have also created the supposed manufacturers of our own misfortunes. Deities such as Apep, Set, Nemesis, Lucifer, Shaytan, Amatsu-Mikaboshi, and others have been devised to cement in our cultural subconscious how agents of higher power than mortals arrange misfortune and strife. They create an opposing (yet, oddly rational) force for us to attribute events in our lives. In the mythos of comics, this is no different.

Enter Darkseid, perhaps one of the most enduring and long-lasting of the villains created by the famous writer and artist Jack Kirby. While mortal villains like Lex Luthor embody human vices and evils, Darkseid is distilled cruelty itself. Darkseid’s canonical origins portray him as the Machiavellian overlord of Apokolips, a hellish world where his might is the only law. His status as a “might makes right” ruler places him (cosmically speaking) in the same league as earthly deities like Ares. Darkseid epitomizes a totally fascist view mixed with an absolute monarchy – the existence of Apokolips exists for the ‘state’ and Darkseid is the state, the planet, the law, and the final decider of all life. Darkseid also commands hosts of unholy demon agents, all manner of hellish beasts, and his war-engine spans dimensions and the very cosmos itself. Like Angra Manyu, Darkseid is opposed by his own Ahura Mazda, the lord of New Genesis called Highfather. Between the names of the planets ruled by these cosmic god-kings, parallels to the Christian and Jewish faiths cannot be ignored.

The Equation of Suffering 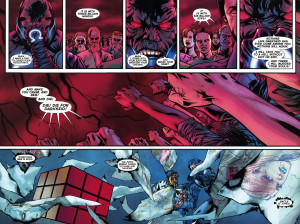 If Darkseid is the force behind the malevolence and evil that exists in the DC Comics universe (or, at least one of many sources), what kind of factors does he use to enforce his will and how does this connect to readers? One of Kirby’s more fascinating elements to Darkseid’s character history, as well as the pantheon of Fourth World characters he created, was the Anti-Life Equation. Darkseid is not, strictly speaking, a “static” character, even if he might seem as such. Normally Darkseid’s methods include sending out hosts of agents to world (mainly Earth) who cause trouble for heroes and villains alike. The heroes then either find that Darkseid desires Earth or he requires somebody/something and Earth is one part of his bigger agenda. While it is rare — and terrifying — when Darkseid himself takes action, he tends to reign from Apokolips and manage. However, he manages with a purpose. He covets the Anti-Life Equation, a fabled force that will give Darkseid power over the universe. Exactly “what” this force is has been subject to many, many interpretations over the  years. However, Grant Morrison has provided one idea that is worth a moment of consideration. In his seminal work Final Crisis, Morrison posits that Anti-Life Equation is an actual mathematical formula for human subjugation:

The concept of mathematically devising the sum whole of human suffering might seem simplistic, but then again so is the idea of saying an evil deity is responsible for, say, war and disease. Morrison’s concept of the Anti-Life also turned Darkseid into a kind of twisted and evil Buddha. Where in Earth’s religious traditions the Supreme Buddha, Siddhartha Gautama, achieved enlightenment after conceptualizing the elements of the human “life equation” that made up suffering (Right Understanding, Thought, Speech, Action, Livelihood, Effort, Mindfulness, and Concentration) so he could alleviate man of its pain, Darkseid’s desire for the Anti-Life Equation is physically and spiritually the opposite of this. Still, Darkseid and Siddhartha are both seekers of the truth. For Darkseid the truth is that all life should be bent to his whims and those who oppose him should be destroyed. A simplistic, bloody, and straight-forward concept, one whose desires have brought many super-heroes under Darkseid’s boot. In his own story, Darkseid is the hero. Imagine a monarch who sees a whole world (or universe) under the yolk of endless, pointless suffering. He sets out with his army to correct this error and to bring peace and stability to those he meets. 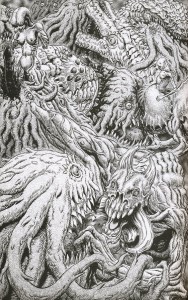 The ability for man to comprehend its own existence and to compartmentalize its sins into “ideas” is one way to help ourselves understand why we do what we do. Another powerful comic created in Japan goes one step further than Kirby did when he created Darkseid to present a genuine embodiment of human suffering. Kentaro Miura’s amazing manga series Berserk, a comic that has run since 1990, had the culmination of part of its decades long plot in a character getting to meet “god” itself. This character had had a life which required him to think on the suffering of not just those close to him, but also to those who have followed him in war and who have died in his name. Upon meeting “god,” a entity which takes the shape of a giant, beating heart, he inquires why evil exists in the world. “God” the explains that it is humans who have created evil. At the dawn of the world mankind could not conceptualize that nothing was in the shadows of the primordial world. This “god,” which is also known by the title of The Idea of Evil, explains how it created all manner of suffering and evil to bedevil man … because man demanded that something exist in the shadows.

Darkseid and The Idea of Evil represent forces that posit the concepts of evil that declare, “What we are is a fundamental part of existence, either as an opposition to good or as a self-made part of human reality.” These characters posit the notion of Evil that is a constant plague to man, yet it is heroes who oppose these forces. Unlike Superman’s battles with Luthor, a struggle that is the constant battle between humanitarian desires and greed, the kinds of heroes who oppose Darkseid and The Idea of Evil are those who do not yield to the terror of what these “evil gods” represent. These characters are embodied in Orion (DC Comics) and Gatsu/Guts (Berserk), two struggling warriors who have lived a life steeped in blood, yet they are warriors who encapsulate the “never say die” attitude when facing unbeatable opposition. Humans have posited that “Evil” exists, yes, however we have also posited that these forces can be defeated. If it is not a priest in ancient Egypt who recounted how the Pharaoh’s spirit bested the cosmic serpent of darkness, Apep, it is the clergy of the Christian church who declares openly that Satan has no power if you have faith and if you are defiant. 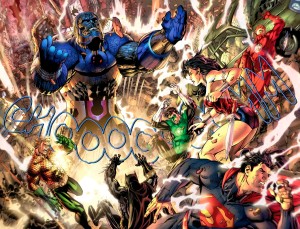 Mankind has created reasons for endless evils, but we will continue to create endless heroes to foil their supposed plans. The Nature of Evil, then, is to be defeated so that stories of the hero’s victory can be recorded forever.

Every pen set to paper or every key on the keyboard declaring good works, kindness, victories against suffering, compassion, and stories of love? Those are the times we spiritually and mentally take up arms against Evil and defeat it. At least, for that moment. The real challenge is marinating the vigil against Evil forever and passing on tales of our victories to the next generation.