Welcome to The Lost Panel, a look at comic phenomenon from days gone bye, brought forth from obscurity for your reading pleasure! This one-shot article has been written by Paul O’Connor, curator of The Longbox Graveyard, an excellent blog focusing on comics, primarily from the Silver Age. Many thanks to Paul for writing up this fantastic article about a legend and a magnificent pose. -AL

The Lost Panel: The Buscema Slouch!

To kick things off, I am spotlighting … the “Buscema Slouch!”

The Buscema Slouch is a pose which Marvel Comics artist Big John Buscema used as visual shorthand to depict indolence, lassitude, and corruption. Buscema’s most famous use of the pose was in Silver Surfer #4, above, where a drunken Loki is in the grip of such languor that he’s heedless of the upended gauntlet emptying onto his thigh from his own nerveless hand.

Never one to let a good pose go to waste, Buscema would use to this position throughout his career. In fact, he used it again, just a few panels later, in the very same issue.

It is in no way a criticism of John Buscema or any other artist that he recycled poses in his work. Every artist has a toolbox of visual tricks they use to tell a story. The measure of a comic book artist isn’t so much whether they recycle poses so much as it is the quality and the efficacy of the poses they recycle. Considering the daily volume of pages comics artists must produce, re-using poses is a necessary evil.

The Buscema Slouch was usually restricted to villains, and often shows sloth or gluttony. Here Buscema uses it for The Collector. Note that like Loki, the Collector also holds a goblet, to better demonstrate his self-indulgence.

Buscema also uses the slouch to show power, often positioning his figures on a throne. In the scene above, Zeus isn’t exactly a bad guy, but from his pose and the object of his affection we instantly know that this is a man of the senses …

… and the same can be said of this member of a pre-Jack Kirby “Eternals” from Fantastic Four #114.

Of course, when power is combined with corruption, the Buscema Slouch is even more effective, whether it is a cold war military hack …

… or the monarch of Latveria, who certainly knows something about ennui …

… and who also understood that a fine way to make a display of power was slouching on his throne, Buscema-style, when some hapless bozo was ushered into his presence!

Sometimes John Buscema used this pose for the good guys, too. Here we see Quicksilver’s temptation telegraphed through his posture, as he listens to Magneto’s honeyed lies:

In that same issue, Hawkeye adopts The Slouch, entertaining brooding thoughts of his own. The index finger to his forehead indicates thoughtfulness, but maybe there’s a hint of Clint’s old evil ways in his careless posture, too.

But first, last, and always, there is Loki, the poster child for each of the deadly sins so adroitly demonstrated by the Buscema Slouch!

And now comes your part, dear reader! Can you find other examples of the Buscema Slouch? Who can identify when John Buscema first used this pose? Was it original to Buscema, or did he get it from some earlier artist? Can you find examples of other artists using this pose? Also … can you find where John Buscema used The Slouch during his signature work on Conan the Barbarian? With all the corrupt pigs lounging on the thrones of the Hyborian Age you’d expect to see this pose all over the place, but my quick review of Buscema’s work on the Cimmerian turned up not a one! Post your discoveries in our comments section, below!

That will do it for this inaugural edition of the Lost Panel. My thanks go to Horace Austin and the guys on my Twitter feed for helping me track down these images, and to Comicosity.com for hosting this column! Thanks for reading, and for more insights and reviews from classic comic books, please visit my home blog, Longbox Graveyard, where every Wednesday brings you a new column on old comics! 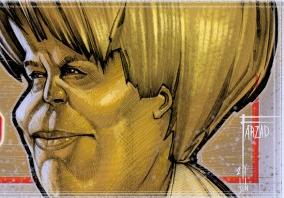