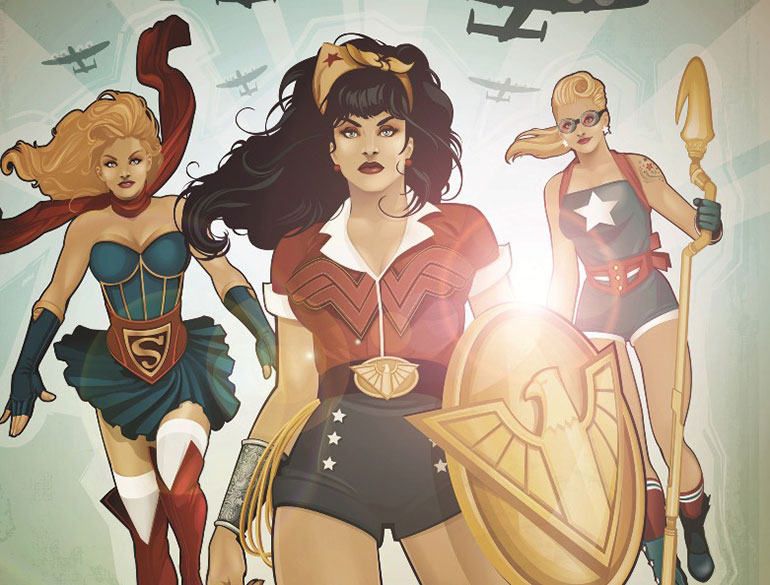 When the superhero comics series Bombshells began in July 2015, I had high hopes for what the story could potentially be. The premise was about a group of female superheroes fighting against the Nazis in World War II. Two years later, after the first volume has been completed and the second volume Bombshells United has just begun, I’m glad that the series has exceeded my expectations.

I’ve realized that Bombshells provided me with a super-hero story that I had been looking for, but had been having difficulty finding. In addition, the book’s diversity and themes of perseverance — in times when the world is filled with despair — provided a helpful message of hope right when incredibly needed.

When I started reading comics in earnest a few years ago, I had the impression that there was a mismatch between the types of super-hero stories I wanted to read and the types of stories that I was seeing. Having grown up with the X-Men, I had an affinity for stories in which heroes fought villains whose motivations were based in bigotry. I was also deliberately looking for books with diverse casts of characters. 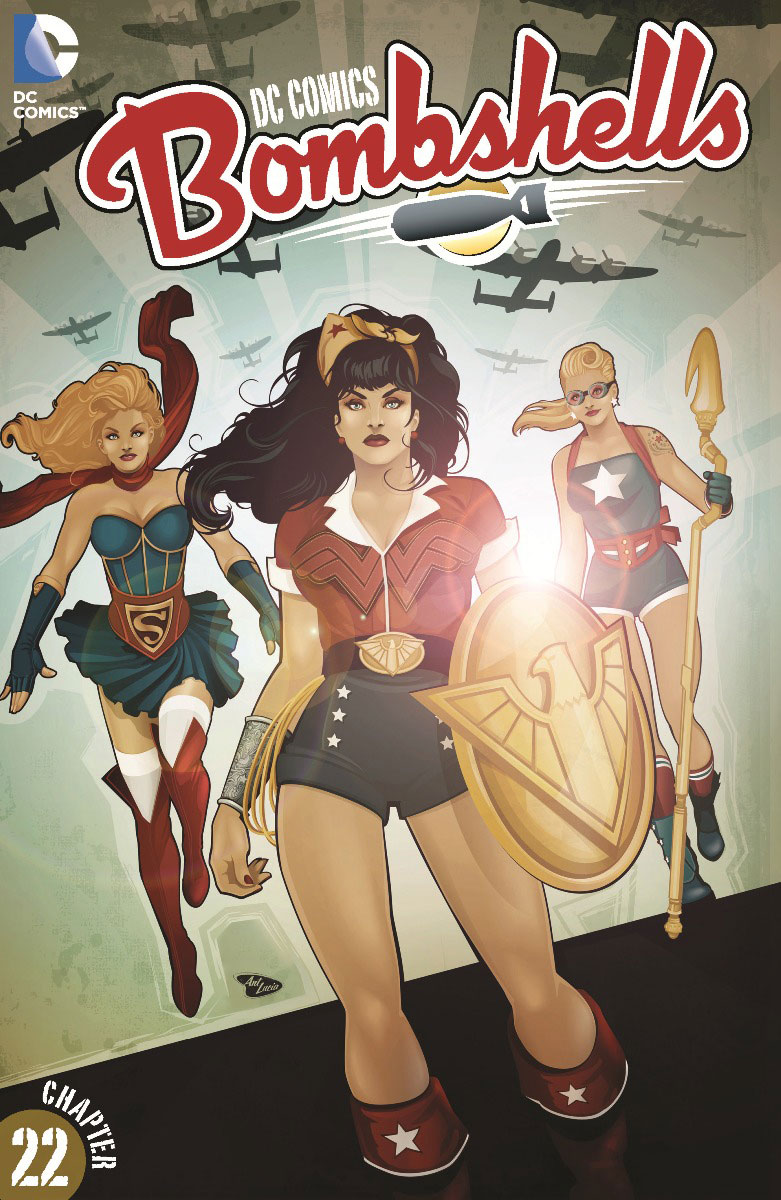 While I found some books that I really enjoyed, I also wasn’t sure what to read next after the first few series that had been highly recommended by other fans. I suspected that many comics with superheroes fighting villains from previous eras might have dated content and I got the impression that stories about moral heroes fighting villains had somehow gone out of style at some point in comics publishing history.

Part of this impression was likely due to being a new comics fan who was not yet familiar with the sizable canon of super-hero stories. Part of it was likely also due to the fact that several events and storylines I read featured super-heroes fighting one another. I wanted stories in which the super-heroes fought villains, in which moral heroes were trying to do the right thing, even when it’s difficult.

Bombshells matched exactly what I wanted to read, and It was published right when it seemed especially relevant. The story had a diverse cast and includes very obvious statements of inclusion in the text. The team includes Jewish, queer, and Romani women fighting the Nazis during World War II, a fitting choice to show characters who are part of the demographics targeted as the ones defeating the Nazis in the story. The characters save civilians and help refugees fleeing violence. 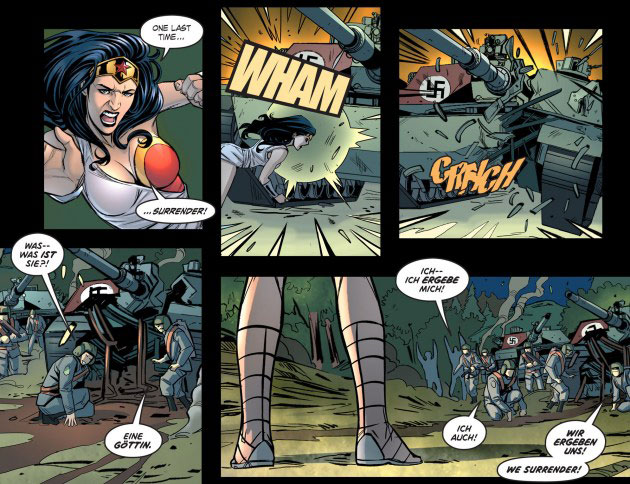 Interspersed throughout the series are the backstories of the characters, so that we learn more about their values and motivations. I’ve always enjoyed character development in stories, even super-hero stories that tend to be action heavy; the fact that this series took the time to establish the characters and their relationships was much appreciated.

Being a newer reader, I had often found that I was missing character development that had probably occurred in earlier series I hadn’t read, and so reading this series from the beginning and feeling like I was really getting to know the characters was a great experience. Reading about a team of friends coming together at a time when heroes seemed to be breaking up friendships was more than welcome.

At a time when many fans were feeling left out and insulted by the books about heroes we love, Bombshells offered heroes who expressly stated messages of inclusion and defending others. 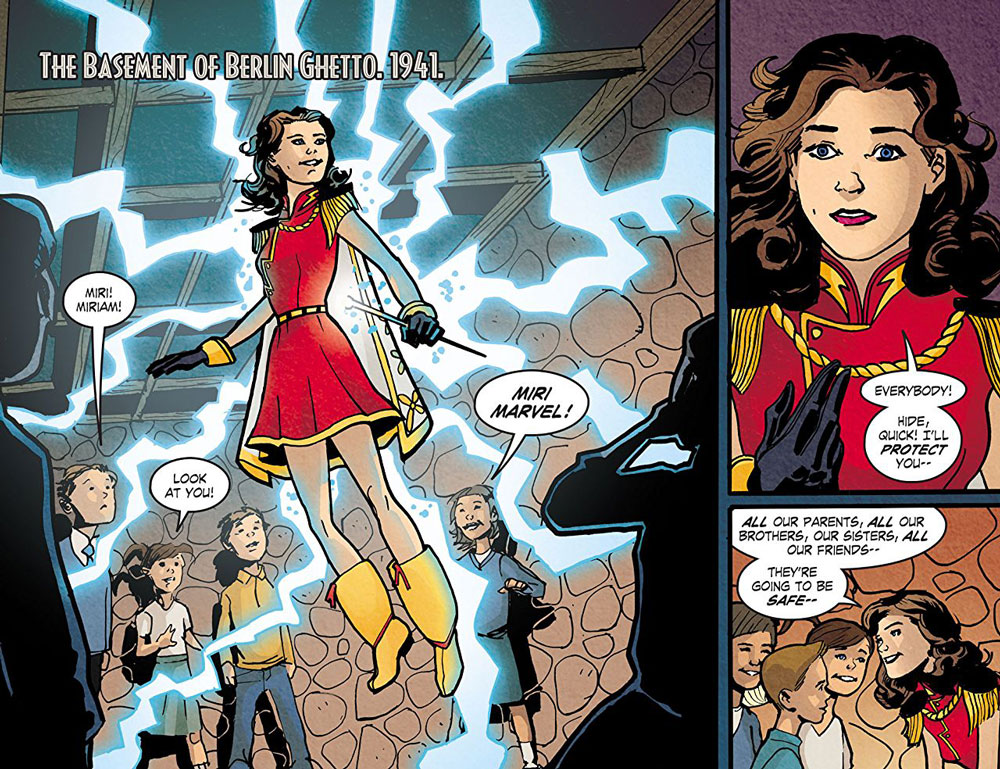 I know there are often arguments made about not being too preachy in stories, but there’s also something to be said for being clear enough in one’s inclusive message that the readers can tell they’re being included. It’s an incredible feeling to know, as a reader, that you don’t have to imagine that these heroes might perhaps help you too but to really feel that they would.

These themes felt especially welcome in May 2016, when Steve Rogers said “Hail Hydra” in Captain America: Steve Rogers #1. If the super-hero who famously fought against the Axis powers became what he was most famous for fighting again, then the Bombshells would take up the mantle he’d left behind.

It felt to me as though a choice has to be made regarding how to bring super-heroes into the modern age. There is no one exclusive way to do this, but the difference between these two stories was stark. One included people who would not have been included seventy-four years ago, when Captain America #1 was published in 1941. The other took a character who many readers have re-imagined in myriad different ways over the years and made him a villain. 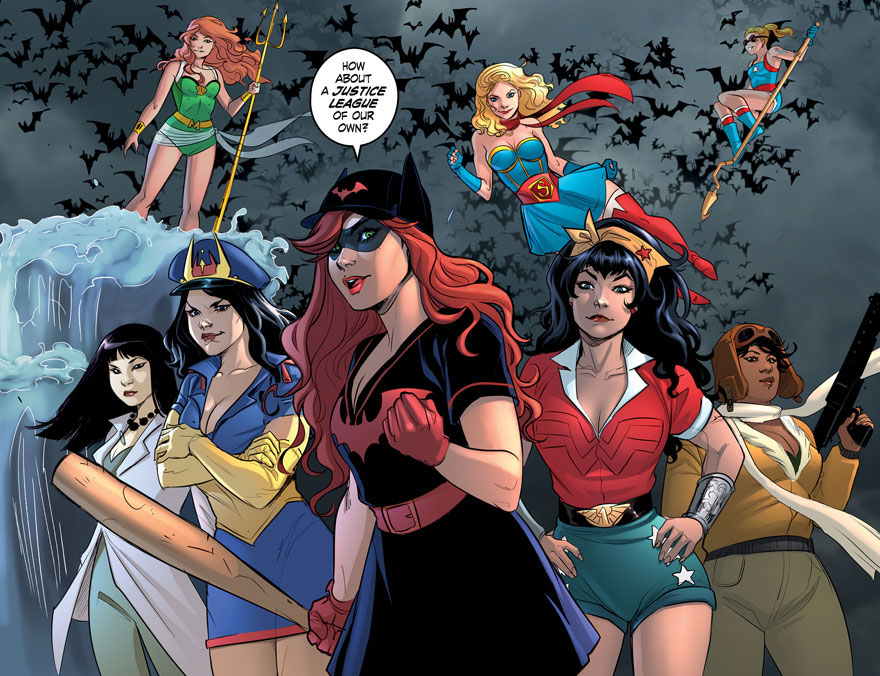 Although That Event is now ending, it’s left a mark on its publisher’s reputation among fans. Meanwhile, Bombshells was one of the few series that kept me from abandoning super-hero comics entirely this summer. Readers often have to re-imagine canon characters to create stories that include themselves, and this series offered some hope that the inclusion and type of stories that I want to read can sometimes be part of the canon as well (even if technically part of an alternate universe comic).

Bombshells offered hope that there was room in comics for stories that make superheroes more inclusive in order to update them, rather than make them into villains to send a message to remind readers (as if they don’t already know) that the world can be horrible.

Bombshells doesn’t shy away from showing that fact that the world can be a dangerous and frightening place. However, the series finds a way to emphasize humanity’s willingness to do good and help others, even in the worst of times.

There are many passages from the book that were incredibly memorable messages to the reader and stayed with me. Especially as an adult reader, there are passages that hit a nerve. One can’t help remembering being a child who loved super-heroes and hoped to grow up to be an adult who did good things like these superheroes do, and then remembering that it’s time to live up to that goal. Though the situation and circumstances might not be exactly the same, there are always bad things to oppose. 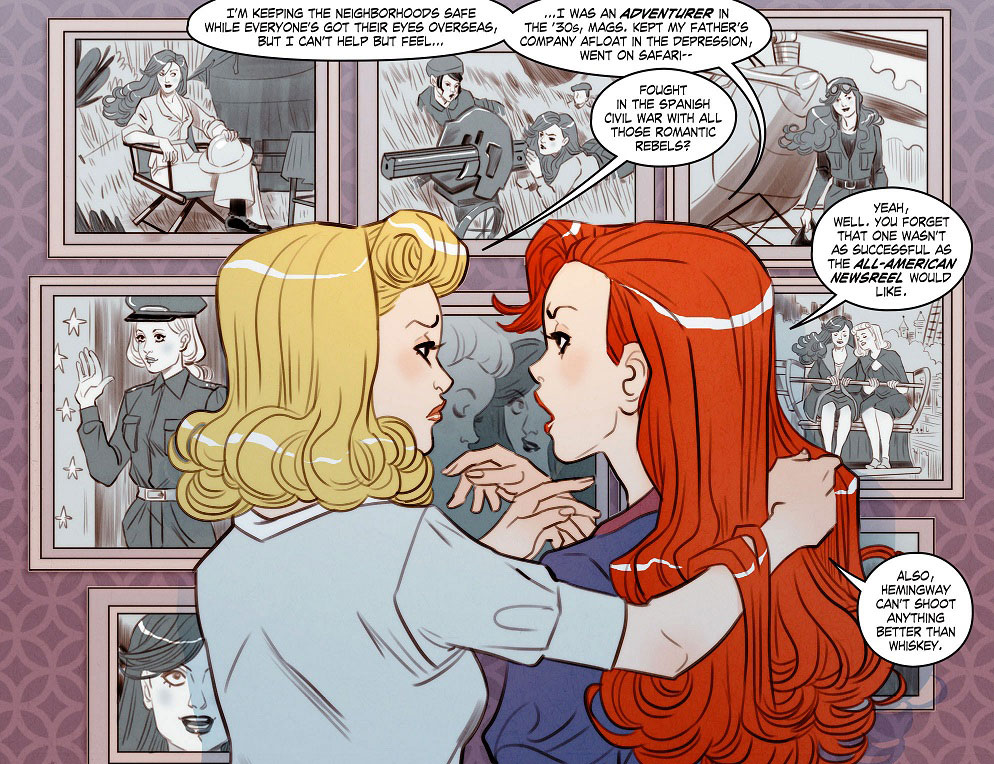 Reading the series, especially during this time period given current events, reads as a reminder that these are not just stories.

Of course, it must be mentioned that there are certain challenges that come with telling a speculative fiction story in a setting based on historical events, especially when those events are within living memory. The fact that World War II stories have been told many times (both as historical fiction and as allegories in various speculative fiction genres) adds to the expectation that this book would be more of the same.

Personally, I thought that the characters made the story feel worthwhile. Super-hero fans often discuss how our favorite super-heroes inspired us, and this is a series that goes into the story knowing the potential of super-heroes as inspiration. Many fans like to imagine that the heroes we love would defend real-world marginalized people, that their message of inclusion and justice includes everyone.

This is a series that shows us what heroes can look like when defending people who are marginalized in the real world. 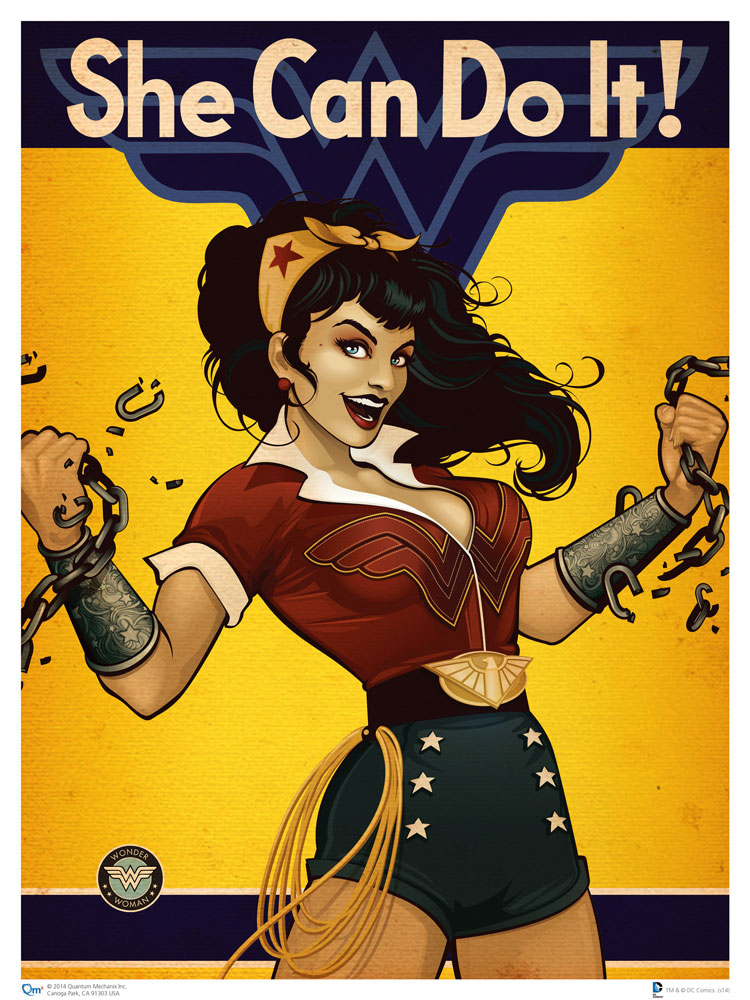 Reading this series has kept up my hope. Whether in the real world or in super-hero comics, we always live under the specter of the past, and there’s always the fear in super-hero comics that old villains will return. Super-heroes fight the same villains once again, and we seem to be fighting the same problems that have existed for much of human history.

It’s possible to fight back and win, even when the situation seems impossible.

There will always be people who keep trying. We all have times when we need that reminder, and Bombshells serves as one.