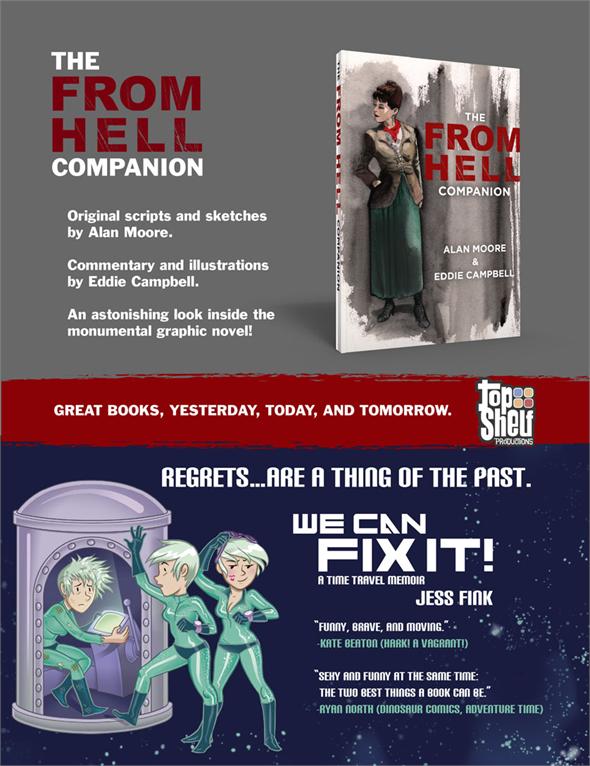 Top Shelf has announced two books available for pre-order: The From Hell Companion by Alan Moore  and We Can Fix It 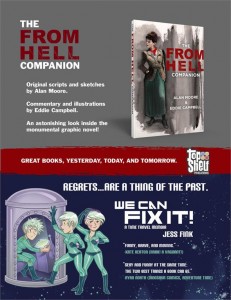 “A man-behind-the-curtain look at a seminal graphic novel… an indispensable reference.” —Kirkus Reviews

FROM HELL occupies a monumental place in the history of the graphic novel: a Victorian masterpiece of murder and madness which has won numerous awards, spawned a major Hollywood film, and remained a favorite of readers around the world for over two decades.

Now, Top Shelf Productions and Knockabout Comics present THE FROM HELL COMPANION, an astonishing selection of Alan Moore’s original scripts and sketches for the landmark graphic novel, with copious annotations, commentary, and illustrations by Eddie Campbell. Here for the first time are a set of pages, including some of Moore’s greatest writing, which have never been seen by anyone except his collaborator. Joining them are Campbell’s first-hand accounts of the project’s decade-long development, complete with photos, anecdotes, disagreements, and wry confessions. Arranged in narrative order, these perspectives form a fascinating mosaic, an opportunity to read FROM HELL with fresh eyes, and a tour inside the minds of two giants of their field.
WE CAN FIX IT
by Jess Fink
— Softcover with a futuristic rounded corner, 6 1/2″ x 8″
— 112 pages
— ISBN 978-1-60309-065-0
— $14.95 (US)
— Audience: Mature readers (16+)
— Shipping in May 2013

“Fink deals with fearless honesty and shameless self-indulgence, and she draws it all in a loose, exuberant style that gives a nice counter-texture to the more serious, soul-searching moments (not that she doesn’t handle the poop jokes with aplomb, too). Her personal journey through humiliation and acceptance should speak to anyone who’s had the misfortune of being a teenager.” — Ian Chipman, Booklist

“This is what autobiography should be. Maybe Jess Fink didn’t ACTUALLY go back in time to spy on herself, make out with herself, and give herself terrible advice, but there are different kinds of truth. And this is the awesome kind.” — Joey Comeau, (A Softer World,Overqualified)

At long last… the wacky, charming, and deceptively sincere time-travel memoir from the author of CHESTER 5000: Jess Fink’s WE CAN FIX IT!

What would you do if you had a time machine? Bet on sporting events? Assassinate all the evildoers of history? Or maybe try to fix all the mistakes and regrets that have haunted you all these years?